Walk Through the Digs Under the Old City 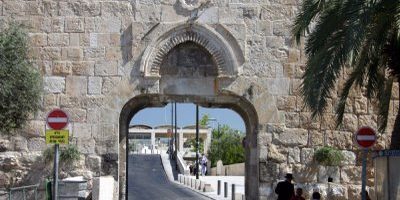 Now that the archaeological dig just outside Dung Gate and the Western Wall has been completed, it has been adapted and set up for visitors – who can now walk under the Old City and see for themselves the 2,500-year-old finds.

Among the most exciting finds were a treasure of 250 gold coins, probably stashed away by the home’s owner before it was destroyed in a possible earthquake or fire. Another find there is the oldest written record ever found in Jerusalem, which will be on display at the Davidson Center across the street.

A festive dedication ceremony of the Ophel Walls site, in what used to be the Givati car-park just below Dung Gate, was held on Tuesday. Visitors can now walk among the ruins, touch the walls and stones that tell the story of generations of Jerusalem history.

It is assumed that some of the external walls that were found are part of King Solomon’s fortifications of the city, as recounted in Kings I, chapter 3. The four-room gatehouse, uncovered in full, is assumed by archaeologist Dr. Eilat Mazar to be the Water Gate mentioned in Nechemiah 3,26.

On the floor of the building were found 12 large clay containers, known in Hebrew as pitasim, used for storing oil or wine; they have been replaced almost exactly as found for visitors to see. On one of them, Hebrew writing can be read.