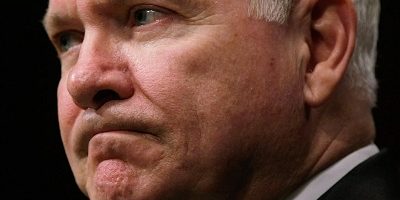 Outgoing US Defense Secretary Robert Gates is worried about the shape of things to come in US foreign policy. In an interview with Newsweek over the weekend, Gates sounded the warning bells.

In Gates’ words, “I’ve spent my entire adult life with the United States as a superpower, and one that had no compunction about spending what it took to sustain that position. It didn’t have to look over its shoulder because our economy was so strong. This is a different time.

“To tell you the truth, that’s one of the many reasons it’s time for me to retire, because frankly I can’t imagine being part of a nation, part of a government… that’s being forced to dramatically scale back our engagement with the rest of the world.”

What Gates is effectively saying is not that economic forecasts are gloomy. US defense spending comprises less than five percent of the federal budget. If US President Barack Obama wanted to maintain that level of spending, the Republican-controlled Congress would probably pass his defense budget. What Gates is saying is that he doesn’t trust his commander in chief to allocate the resources to preserve America’s superpower status. He is saying that he believes that Obama is willing to surrender the US’s status as a superpower.

THIS WOULD be a stunning statement for any defense secretary to make about the policies of a US President. It is especially stunning coming from Gates. Gates began his tenure at the Pentagon under Obama’s predecessor George W. Bush immediately after the Republican defeat in the 2006 mid-term Congressional elections.

Many conservatives hailed Obama’s decision to retain Gates as defense secretary as a belated admission that Bush’s aggressive counter-terror policies were correct. These claims ignored the fact that in his last two years in office, with the exception of the surge of troops in Iraq, under the guidance of Gates and then secretary of state Condoleezza Rice, Bush’s foreign policies veered very far to the Left.

Gates’s role in shaping this radical shift was evidenced by the positions he took on the issues of the day in the two years leading up to his replacement of Donald Rumsfeld at the Pentagon. In 2004, Gates co-authored a study for the Council on Foreign Relations with Israel foe Zbigniew Brzezinski calling for the US to draw closer to Iran at Israel’s expense.

Immediately before his appointment, Gates was a member of the Baker-Hamilton Iraq Study Group. The group’s final report, released just as his appointment was announced, blamed Israel for the instability in Iraq and throughout the Middle East. Its only clear policy recommendations involved pressuring Israel to surrender the Golan Heights to Syria and Jerusalem, Judea, and Samaria to a Hamas-Fatah “national unity government.”

In office, Gates openly opposed the option of the US or Israel attacking Iran’s nuclear installations. He rejected Israel’s repeated requests to purchase weapons systems required to attack Iran’s nuclear installations. He openly signaled that the US would deny Israel access to Iraqi airspace. He supported American appeasement of the Iranian regime. And he divulged information about Israel’s purported nuclear arsenal and Israeli Air Force rehearsals of assaults on Iran.

A month before Russia’s August 2008 invasion of US ally Georgia, Gates released his National Defense Strategy which he bragged was a “blueprint for success” for the next administration. Ignoring indications of growing Russian hostility to US strategic interests — most clearly evidenced in Russia’s opposition to the deployment of US anti-missile batteries in the Czech Republic and Poland and in Russia’s strategic relations with Iran and Syria — Gates advocated building “collaborative and cooperative relations” with the Russian military.

After Russia invaded Georgia, Gates opposed US action of any kind against Russia.

GIVEN THIS track record, it was understandable that Obama chose to retain Gates at the Pentagon. To date, Obama’s only foreign policy that is distinct from Bush’s final years is his Israel policy. Whereas Bush viewed Israel as a key US ally and friend, from the first days of his administration, Obama has sought to “put daylight” between the US and Israel. He has repeatedly humiliated Prime Minister Binyamin Netanyahu. He has abandoned the US’s quiet defense of Israel’s purported nuclear arsenal. He has continuously threatened to abandon US support for Israel at the UN.

All of these positions, in addition to Obama’s refusal to state outright that he rejects the Palestinian demand to destroy Israel through unlimited Arab immigration to its indefensible “peace” borders, mark an extreme departure from the Israel policies adopted by his predecessor.

Aside from its basic irrationality, Obama’s policy of favoring the Palestinians against the US’s most dependable ally in the Middle East is notable for its uniqueness. In every other area, his policies are aligned with those adopted by his predecessor.

His decision to surge the number of US forces in Afghanistan was a natural progression from the strategy Bush implemented in Iraq and was moving towards in Afghanistan.

His use of drones to conduct targeted killings of terrorists in Yemen and Pakistan is an escalation not a departure from Bush’s tactics.

Obama’s decision to gradually withdraw US combat forces from Iraq was fully consonant with Bush’s policy.

His decision to engage with the aim of appeasing the Iranian regime while supporting the adoption of ineffective sanctions against Iran in the UN Security Council is also a natural progression from Bush’s policies.

His bid to “reset” US relations with Russia was largely of a piece with Bush’s decision not to oppose in any way Russia’s invasion of Georgia.

Obama’s courtship of Syria is different from Bush’s foreign policy. But guided by Rice and Gates, Bush was softening his position on Syria. For instance, Bush endorsed Rice’s insistence that Israel remain mum on the North Korean-built illicit nuclear installation at Deir-A-Zour that the Air Force destroyed in September 2007.

As for Egypt, as many senior Bush administration officials crowed, Obama’s abandonment of 30-year US ally Hosni Mubarak was of a piece with Bush’s democracy agenda.

Obama’s policy toward Libya is in many respects unique. It marks the first time since the War Powers Act passed into law 30 years ago that a US President has sent US forces into battle without seeking the permission of the US Congress. It is the first time that a president has openly subordinated US national interests to the whims of the UN and NATO and insisted on fighting a war that serves no clear US national interest.

Notably, Gates has been an outspoken critic of the war in Libya. In interviews in March he said that Muammar Gaddafi posed no threat to US interests and that no vital US interests are served by the US mission in Libya.

Yet even Obama’s Libya policy is not as sharp a departure from Bush’s foreign policy as his Israel policy is. Although Bush wouldn’t have argued that the UN gets to decide where US troops are deployed, he did believe that the US needed UN permission to deploy troops.

TO A degree, it is the basic incoherence of Obama’s Libya policy that puts it in line with all of his other foreign policies except Israel. Those policies — from Afghanistan to Guantanamo Bay — are marked by inconsistencies. Like Libya, there is a strong sense that Obama’s foreign policy to date has not been guided by an overarching worldview but rather spring from ad hoc decisions with no guiding conceptual framework.

But if Gates’s words to Newsweek are any indication, all of this may be about to change. If Gates believed that Obama would continue to implement the policies of Bush’s last two years with minor exceptions while sticking it to Israel, he would likely not have spoken out against Obama’s policies so strongly. Apparently Gates believes that Obama’s foreign policy is about to undergo a radical transformation.

And this would make sense, particularly if, as Obama has said a number of times, he is more committed to transforming America than winning a second term in office.

Until the Republicans won control of the House of Representatives last November, Obama was able to concentrate on passing his domestic agenda. Obama’s willingness to lose the elections in order to push through his radical health care reform package demonstrated his commitment to implementing his policies at all costs.

With the Republicans in charge, Obama can’t even pass his 2011 budget let alone his far reaching plans to transform US immigration policy, labor policy, environmental policy and Social Security.

In these circumstances, the only place where the power of the presidency gives him wide-ranging freedom of action to transform the US is foreign affairs.

What Gates’s fiery departure indicates then is that for the rest of his term, Obama’s entire foreign policy is liable to be as radical a departure from Bush’s foreign policy as his Israel policy is. The war in Libya is a sign that things are changing. The fact that in recent months even Gates has taken to attacking Obama’s Iran policy as too soft, further attests to a radicalization at work.

Then there is Obama’s Afghanistan policy. When in 2009 Obama announced his surge and withdraw policy, Gates minimized the importance of Obama’s pledge to begin withdrawing US combat forces in July 2011. In recent months, Gates has joined US combat commanders in pleading with the White House not to begin the troop drawdown until next year. But to no avail.

Not only is he unwilling to delay the withdrawal of combat troops. Obama is suing for peace with the Taliban. As Republican lawmakers have argued, there is no way the empowerment of the Taliban in Afghanistan can be viewed as anything but a defeat for the US.

Gates’s successor at the Pentagon will be outgoing CIA Director Leon Panetta. US military and intelligence officers believe that Panetta’s chief mission at the Pentagon will be to slash US defense budgets. Since his appointment was announced, sources inside the military have expressed deep concern that the planned budget cuts will render it impossible for the US to maintain its position as a global superpower. More than anything else, Gates’ statements to Newsweek indicate that he shares this perception of Obama’s plans.

To date, Obama’s stewardship of US foreign policy has been marked by gross naivete, incompetence and a marked willingness to demean and weaken his country’s moral standing in the world.

Imagine what will happen if in the next year and a half Obama embarks on a course that makes his Israel policy the norm rather than the exception in US foreign policy.