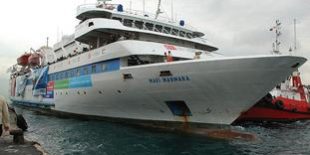 Dr. Alan Bauer, an American- Israeli victim of a Palestinian terrorist attack, on Thursday filed a first of its kind lawsuit in an effort to seize ships to be used by Islamic and anti-Israel organizations to try to breach the blockade of the Gaza Strip later this month.

The suit, Bauer v. The Mavi Marmara, was filed in Manhattan federal court, seeking to confiscate 14 ships, which are scheduled to participate in the upcoming flotilla and which were outfitted with funds Bauer says were unlawfully raised in the United States by anti-Israel groups, including The Free Gaza Movement. Over the weekend, however, the Turkish IHH organization said the Mavi Marmara was still too damaged to sail for Gaza.

The plaintiff, a biologist from the Chicago area, and his son Jonathan, then aged seven, were seriously wounded when Palestinian suicide bomber detonated a bomb, packed with metal spikes and nails, in the center of a crowd of shoppers on King George Street in Jerusalem on March 21, 2002.

Bauer alleges that The Free Gaza Movement and other American-based anti-Israel organizations have raised funds in the United States to outfit the Gaza flotilla ships. The lawsuit contends that furnishing and outfitting the ships, which are being used for hostilities against a US ally, violates American law.

The plaintiff rests his claim upon the rarely used 18th-century “informant” statute (18 USC Section 962) that allows a plaintiff (called an “informer”) to privately seize ships outfitted in the United States for use against a US ally.

The plaintiff is represented by attorneys Robert J. Tolchin of New York, and by Nitsana Darshan- Leitner of Israel, founder of Shurat HaDin – Israel Law Center.

This is the first lawsuit brought to seize the Gaza Flotilla ships.

“We intend to seize the Gaza flotilla ships and turn them over to a victim of Palestinian terrorism.

The extremists organizing these hostile provocations against Israel must not be allowed to illegally raise funds for their operations in the US.

Escalating attacks on Israel from all directions require new and innovative responses. This unprecedented private action will help block their efforts to breach the coastal blockade and smuggle materials to Hamas in Gaza,” Darshan-Leitner said.

Tolchin added, “This lawsuit will bring judgment to people who have until now ignored the law. Each flotilla ship is an attack on Israel and thus a slap in the face to the United States and every other nation that is at peace with Israel. The flotilla organizers, and the owners of these boats, should be held accountable for the damages and deaths they cause.”

Shurat HaDin has been spearheading the legal battle against the upcoming flotilla, filing lawsuits in several countries, targeting the flotilla’s organizers and sponsors as well as essential service providers.

Last week one of the ships that was scheduled to participate in the flotilla was informed that it would not be covered by its maritime insurance company, after Shurat HaDin sent out a warning letter, effectively making it impossible for the ship to leave its port in Marseilles.