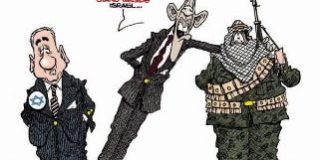 Multiple news reports this week in the U.S. and Israel, quoting reliable sources, indicate that the Obama Administration is once again bullying Israel to make concessions that would put it at risk and strengthen and embolden Israel’s enemies, who are sworn to its destruction. The issue is the same one that caused shockwaves last month — the border of a future Israel in an increasingly hostile and dangerous Middle East.

Here’s the background. A few weeks ago Barack Obama outraged many Israelis, millions of pro-Israel Americans and a majority of the U.S. Congress by demanding that Israel agree to restart negotiations with the Palestinian Authority/Hamas based on the borders of Israel before the 1967 war. Obama added the caveat “with mutually agreed land swaps.”

What does that mean? Before the 1967 war Jerusalem was a divided city with important Jewish religious sites, including the Western Wall, as well as Christian sites under the control of Jordan. Current major Jerusalem suburbs where tens of thousands of Israelis live would also fall outside of Israel’s boundaries. At its narrowest point Israel would be only 8 miles wide. In Israel those borders are called “Auschwitz borders” because they would put the entire Israeli nation at risk.

Jennifer Rubin, a conservative commentator at the Washington Post, explains what this would mean. If Israel wanted to continue to have sovereignty over an undivided Jerusalem it would have to carve up Israel elsewhere and give land to a new PLO/Hamas state. This is the same Hamas that refuses to concede that Israel has any right to exist at all!

When it comes to Israel, President Obama is dangerously out of touch with the American people. A recent Quinnipiac poll found that 76% of Americans oppose the creation of a Palestinian state if it refuses to renounce terrorism; 79% oppose the creation of a Palestinian state that refuses to recognize Israel’s right to exist; and 63% of Americans do not believe that Israel should be forced to negotiate with Hamas.

Yet after two and a half years of his presidency, there can be no doubt about where Obama’s heart is in the Middle East. He is obsessed with forcing Israel into a deal that will surely weaken that democracy while creating “Hamastan,” another terrorist state in the Middle East.