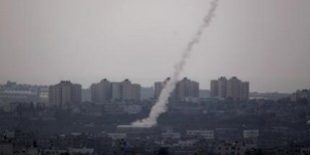 Three recent news items serve to underscore our challenging reality. Iran last week launched an “observation satellite,” the infrastructure for which could easily be deployed to deliver nuclear or other warheads. An Israeli civil defense exercise is scheduled to start today and continue for five days. It will simulate massive rocket barrages. Finally, we are informed that a huge underground shelter – designed to safeguard thousands from incoming missiles – has been inaugurated under the refurbished parking lot between the Habimah Theater and the Mann Auditorium in the very heart of cosmopolitan Tel Aviv.

Too few key players in the international community fully appreciate the kind of alarming dangers facing Israel that those items indicate.

Certainly no country anywhere in the Western world is exposed to anything remotely resembling the threats Israel faces – be they of nuclear attack from the ayatollahs of Tehran or a rain of conventional rockets from Iran’s proxies, Hezbollah in Lebanon and Hamas in Gaza. Syria, too, possesses a terrifying weapons arsenal, and the current instability in Damascus only heightens the potential threat.

Nonetheless, hardly any international attention was paid to the fact that Iran has just demonstrated, yet again, that it assiduously upgrades its rocketry. The technology that propels satellites into space can be adapted and used for intercontinental ballistic missiles.

In theory these could be aimed against any country, certainly in Europe. Yet since the Iranian regime principally directs it vitriol and invective against Israel, it is assumed that the Jewish state constitutes the primary target, and that appears to mitigate international angst.

Still greater indifference greeted the first glimpses of the massive underground shelter constructed and outfitted to offer protection to thousands of Israelis in a variety of doomsday scenarios – nuclear, chemical and conventional.

In ordinary times the 3,740 square-meter shelter space would serve as a four-story underground parking facility, yet each of the four floors is also outfitted with such seemingly incongruous features as decontamination showers for use in the event of a chemical attack, filters against an assortment of unconventional WMDs and emergency medical clinics for triage and first aid to casualties. The very fact that such a complex is at all deemed necessary in the 21st century speaks volumes.

The same goes for the civil defense drill this week that is aimed at preparing us for the dangers of rocket onslaughts from Iran, Syria, Lebanon and Gaza – throughout the country and at all hours of the day and night. Air raid sirens will sound mid-morning on Wednesday to test preparedness in workplaces and schools. Another siren in the evening will gauge preparedness in the homes. In both cases, the public will be asked to locate the closest secure room and/or bomb shelter.

The very fact that such dry-run rehearsals are indispensable, to say nothing of their specificities and scope, attests all-too palpably to the fact that we live in a highrisk zone and must unfortunately prepare for circumstances far from the normalization to which we aspire.

Were Israel surrounded by sincere peace partners, of course, no such dire maneuvers would be required, while genuine compromises and coexistence would be eminently attainable.

This should be patently obvious to all truly objective observers overseas. Were the family of nations really as high-minded as it professes to be, it would direct its righteous indignation against the undisguised menacing of a geographically tiny democracy whose civilian population is vulnerable like no other.

Instead, too often, a blind eye is turned to the lethal stockpiles amassed against Israel, even as unconscionable efforts are intensified to tarnish Israel, ostracize it and turn it into a global pariah.

Within the Israeli consensus, we agonize as to whether there is more that our leadership could and should be doing to advance the goal of normalization.

Bitterly, in the summer of 2011, daily developments in this region, where we had forged ties with Egypt and Jordan and anticipated widening the circle of normalization, suggest that the momentum has been shifting in the very opposite direction. Primarily blaming Israel for this reversal, though it might be convenient, simply does not square with an objective assessment of what is unfolding in today’s Middle East.