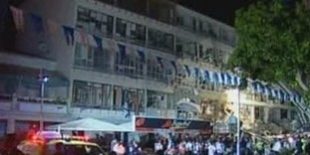 A suspected gas explosion rocked a four-story building in Netanya overnight Thursday, leaving four people dead and at least 50 others injured. The cause of the explosion was initially unknown, but Police officially announced that the explosion was caused by a gas tank or a number of tanks.

“This is not a terror attack,” a Netanya police spokesman said. A resident close to the scene of the bombing told Israel Radio he smelled a strong smell of gas.

Public Security Minister Yitzhak Aharnovitch who arrived on the scene, told Israel Radio, “Our working assumption is that this was caused by a gas tank, although nothing is certain.” He added, “There is a stong smell of gas. What’s important now is to evacuate all the injured from the building. Searches are still underway…there are probably people on the upper floors that were not hurt but are trapped. It may take hours to get them out. The rescue services will go room by room to search for trapped people.”

Police arrested a Netanya resident who they suspect may have cut a gas line causing a leak that led to the explosion, Israel Radio reported. The man was detained by Police earlier on Thursday and later released for trying to steal gas pipes which are made of metal that can later be sold, according to the report.

MDA Paramedics said that three women and one man were killed in the blast. Two of the women were in their forties, one woman was in her twenties and the man was in his fifties.

MDA paramedics were on the scene attending to the wounded at the building, located in Netanya’s Atzmaut Square. Firefighters were also disconnecting the building from gas pipes and the electricity grid.

The injured were evacuated to the Laniado Medical Center in Netanya, Hillel Yaffe Hospital in Hadera and Meir Hospital in Kfar Saba by MDA paramedics. Three of the wounded were listed as moderately injured, and the rest were slightly hurt.

A number of buildings around Atzmaut Square sustained heavy damage as a result of the blast. Police said there was “widescale destruction” in the blast area. A number of passers-by were lightly injured.

Police sealed off Atzmaut Square. Drivers were asked to keep away from the area.