Alleged Israeli spy in Egypt a US citizen 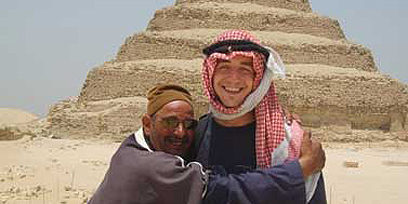 The United States consul to Cairo met Monday with Ilan Grapel, the Israeli man arrested on suspicion of espionage in Egypt. The Egyptian authorities involved Washington in the matter, due to the fact that Grapel entered Egypt with his US passport.

The Israeli Foreign Ministry was informed of the meeting by Washington: “We are in touch with the Egyptians and Americans, making sure Grapel’s rights are observed. We hope he will be released soon,” a ministry official stated. With the consul’s mediation, Grapel was permitted to speak to his parents.

Jerusalem offered no official response to the news of Grapel’s arrest, but diplomatic sources said the charges against him were “utter nonsense.”

Grapel immigrated to Israel from the United States and joined the IDF in March 2005. He served as a lone soldier in the Paratroopers’ 101st Battalion and was injured during the Second Lebanon War.

Despite Grapel’s alleged “identification” by what was called “an Israeli organization,” Jerusalem officials said that the Egyptian reports of a Mossad agent’s arrest were unreliable. The Foreign Ministry continued to claim that they are unaware of any missing Israeli in Cairo, adding they were looking into the matter.

“There is no such thing, no Israeli agent has been arrested in Egypt,” Foreign Ministry Spokesman Yigal Palmor told the BBC on Monday. “These reports are false. So far we did not receive any information from the Egyptian authorities on an Israeli citizen who has been arrested.”

One of the man’s acquaintances told Ynet that he is an American who had made aliyah several years ago in order to serve in the IDF. “From what I remember he obtained Israeli citizenship for this end. He served in the Paratroopers as a lone soldier and was injured in the Second Lebanon War,” he said.

“When Ilan arrived (in Israel) he studied Arabic and went around Arab villages to learn the language,” he added. “There was nothing unusual about him, he’s a very nice guy, clever with a sense of humor.”

He immediately recognized his friend looking at the reports of the arrest. “I looked at the photos they published and even without seeing the face, which was blurred, I realized it was him. He has the same pictures on Facebook, they may have just taken them from there. I hope he’s OK. Maybe the fact that he’s an American will help with his release.”

Another friend of Grapel’s also recognized him when he saw the photos. “I saw the picture of him hugging my squad commander and realized it was Ilan.” He noted that he keeps in touch with Grapel and had last heard from him a month and a half ago. “Last October he went to visit his parents and a month and a half ago he told me he was going to Egypt and then coming to Israel to do reserve duty.”

The friend described Grapel as a good person who loves Israel. “He’s got a head on his shoulders. A very very good person. He always makes sure never to miss his reserve duty.”

Referring to the possibility he was employed as a Mossad agent he said: “It doesn’t make sense, if he told this to people it must have been a joke.”

“Ilan wasn’t sent by anyone, not by the Mossad, not by the Foreign Ministry and not by the Interior Ministry. All the stories suggesting he’s a Mossad agent are not true,” Garpel’s father Daniel told Ynet on Monday.

“We are very concerned, we don’t know where he is.”

The father, who resides in New York, said that his son was in Egypt as part of his law studies in the Emory University. “They have an assignment. Every year they go to a different country, and this year he was sent to Cairo. He left on May 9 and arrived via Europe the following day. He arrived after the revolution, so the claims he incited the protests are lies.”

The father confirmed Grapel had spent time in Israel but claimed that “90% of the other claims are untrue. He lived in a student hotel, not far from Tahrir Square. All the stories of him being a Mossad agent are untrue.”

After Grapel was discharged from the army he went to law school. “He was sent to Egypt because he speaks Arabic.”

The father said he last spoke to his son on Saturday and noted he was meant to leave Egypt at the end of August. “I got a call from his office yesterday saying he hadn’t turned up. They spoke to the US consulate. We shall address Congress. No one from Israel contacted us.”

Later Monday, State Department spokesman Mark Toner confirmed that the US was aware of Grapel’s arrest.

Toner qualified that “it’s very preliminary information, but we are aware that US citizen Ilan Haim Grappel was detained on June 12th by Egyptian authorities.

“A consular official did visit Mr. Grappel on June 13th at the prosecutor’s office. That was in New Cairo. We’ve confirmed that he was in good health. Mr. Grappel’s family is aware of his arrest. And I refer you to the government of Egypt for details on the charges against him.”