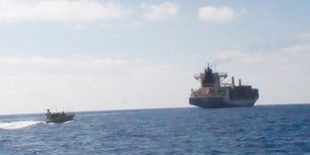 Iran has been caught red-handed in 10 different attempts in recent years to transfer weaponry to terrorists throughout the Middle East, including a recent case, in April, when a shipment of advanced missiles was caught en-route to Taliban forces in Afghanistan, according to a United Nations report obtained Thursday by The Jerusalem Post.

The report was submitted three weeks ago to the Security Council by a UN group of experts that monitors compliance with UN sanctions imposed on Iran. The report was leaked to the Internet and obtained by a number of leading Israeli defense analysts.

The report documents all 10 cases of arms smuggling, including the case of the Victoria cargo ship, which was stopped by the Israel Navy earlier this year carrying arms for Hamas. In the most recent case cited, British forces in Afghanistan found a weapons shipment of advanced Iranian-made anti-ship missiles and 122 mm. rockets en route to Taliban forces in Afghanistan.

In March, Turkish authorities stopped an Iranian cargo plane bound for Syria. At the time, Turkey tried to downplay the news, but the UN report reveals that authorities discovered dozens of AK-47 assault rifles and close to 2,000 mortar shells. The report confirms that the arms originated in Iran and were supplied by the Revolutionary Guard Corps.

The report further reveals that Iran test fired two of its most advanced long-range missiles – the Shihab 3 and the Sajil – in February.

The tests were not reported at the time by the Iranians, or by the United States or Israel, both of which track such missile launches.

Tal Inbar, head of the Space Research Center at the Fisher Institute for Air and Space Strategic Studies, analyzed the UN report and said the missile tests were significant since Iran was making efforts to hide its ballistic missile program, something that raises suspicions about the nature of the program and its connection to the Islamic Republic’s illicit nuclear drive.

“For a number of years, they have been trying to display shorter-range rockets like the Qiyam and the Fateh 110,” Inbar said. “In the most recent military parade, they did not even did not even show the Shihab.”

The report, which also discusses the regular exchange of ballistic missile technology between Iran and North Korea, said financial sanctions appeared to be having an effect on Tehran, as demonstrated by “the range of measures taken by Iran to circumvent them.”

“These measures are expensive and time-consuming to set up and administer. They include arrangements to enable sanctioned Iranian banks to maintain access to the international financial sector through normal business conducted by non-sanctioned Iranian banks,” the report said. “Nevertheless, despite financial restrictions, Iran appears able to continue to pay for procurement from abroad for its prohibited nuclear and ballistic missile programs.”