Is it arrogance, Mr President, or are you deaf? 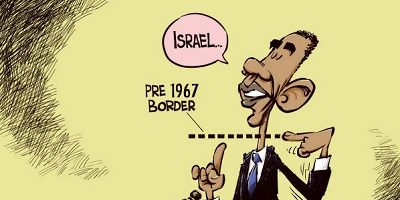 News Item#1: The United States has been holding separate talks with Israeli and Palestinian delegates to see if they are willing to go back to the negotiating table based on Obama’s May 19 speech. (Ha’aretz, June 7, 2011)

News Item#2: Seventy-seven percent of Israelis oppose returning to pre-1967 lines even if it would lead to a peace agreement and declarations by Arab states of an end to their conflict with Israel, a poll revealed Monday. (The Jerusalem Post, June 7, 2011)

The Obama administration has been pursuing its effort to get the stalled Palestinian Arab-Israeli talks underway, based on the “new policy” outlined by President Barack Obama last month.

It’s as if May’s media-mesmerizing moments didn’t happen. Yet surely the message could not have been communicated any more clearly – or any louder – than it was during Israeli Prime Minister Benjamin Netanyahu’s visit to the States?

Ambushed by Obama’s carefully, and deliberately, timed speech at the State Department, the Israeli knew even before his plane took off from Ben Gurion Airport that the world’s most powerful man had made a strategic decision to align his administration behind the Arab and Muslim states.

In the ignominious words that will forever be part of his epitaph, Obama stated: “We believe the borders of Israel and Palestine should be based on the 1967 lines with mutually-agreed upon swaps.”

And as he sought to clarify at the AIPAC convention a couple of days later: “By definition, it means that the parties themselves – Israelis and Palestinians – will negotiate a border that is different than the one that existed on June 4, 1967.”

Talk about building castles in the sky.

The starting point of Obama’s protocol for peace making is now the armistice lines drawn up following Israel’s War of Independence in 1949. What’s more, the American also embraced the specific terms of reference employed by Israel’s enemies – among whom Obama must surely now be numbered – who craftily refer to these lines as “the 1967 borders.” (“Israel bristles at Obama’s call for 1967 borders” – ABC News May 20, 2011)

Why is this an issue? It’s an issue because “armistice lines” are ceasefire lines agreed upon by both the belligerents (in this case the Arab states Egypt, Syria, Lebanon and Jordan) and the self-defense responders (the, then, brand-new State of Israel).

Armistice lines, by definition, remain open to change, provided that change is, again, settled in negotiations between both sides. Only after final agreements have been reached, and both sides have consented (usually as part of a peace treaty) as to where the lines should be drawn, do they become internationally recognized borders.

As long as this state of hostility existed, the frontiers between Israel and these four Arab states were armistice lines, not borders. After the 1978 peace treaty with Egypt, in accordance with which a number of changes were made to the Israel-Egypt armistice lines – they became internationally recognized and defendable borders. So too after Israel and Jordan signed their peace agreement in 1994.

But Israel never agreed, after 1949, that Jordan’s de jure borders extended into what the Hashemite king in Amman called the “West Bank.” In fact, except for Britain and Pakistan, the entire world regarded Jordan’s extension of sovereignty over Samaria and Judea as an illegal act.

When, then, in 1967 – again in a war of self defense against attacking aggressors – the IDF threw Jordan out of Samaria and Judea, Israel was not overrunning another state’s borders or taking control of another nation’s sovereign territory. The Jewish State, although victorious, chose to extend not its sovereignty, but only its administration, over the “disputed” land.

Which is what they are under international law: “disputed” and not “occupied” territories.

(And, by the way, it does not matter how many times – not even if it is a million times – the United Nations or any of its member states say that Israel overran another nation’s borders and is occupying another nation’s land – the hard cold uncomfortable, for them, but unchangeable fact of history is that Israel did no such thing.  Them accusing Israel of being in the wrong does not put Israel in the wrong. It only makes the accusers distorters of the truth, aka liars.)

But back to Obama’s speech, or rather, the fallout from it: First of all we had an angry but courteous Netanyahu – in a show of courageous conviction that flabbergasted the American press – stand down Obama in the Oval Office, letting him (and the watching world) know in crystal clear terms that Israel cannot, and WILL not, return to the 1967 lines:

“I think for there to be peace, the Palestinians will have to accept some basic realities. The first is that while Israel is prepared to make generous compromises for peace, it cannot go back to the 1967 lines, because these lines are indefensible, because they don’t take into account certain changes that have taken place on the ground, demographic changes that have taken place over the last 44 years. Remember that before 1967, Israel was all of 9 miles wide — half the width of the Washington Beltway. And these were not the boundaries of peace; they were the boundaries of repeated wars, because the attack on Israel was so attractive from them. So we can’t go back to those indefensible lines, and we’re going to have to have a long-term military presence along the Jordan.”

It was repeated when “Bibi” addressed AIPAC: “Israel CANNOT return to the indefensible 1967 lines.”

And the prime minister said it even more decisively when addressing a joint meeting of the US Congress on May 24th: “Israel WILL NOT return to the indefensible lines of 1967.”

Both AIPAC and – far more importantly – Congress strongly supported Netanyahu’s position – and not just this one, but also the others he laid out including:

•That the PLO leaders must spell out their acceptance of Israel as a Jewish state.

•That Jerusalem will never again be divided.

•That Israeli sovereignty will be extended over some of the settlements.

•That the Palestinian Authority must terminate its pact with Hamas.

•That peace must be directly negotiated between the two parties.

These were Netanyahu’s requirements – and they garnered the full and enthusiastic support of both sides of the aisle.

Above and beyond this American approval, the Israeli people themselves totally oppose a return to the 1949 (1967) lines – EVEN IF PEACE WERE PROMISED IN EXCHANGE!

From where, then, do President Obama and Hillary Clinton – his secretary of state – get the gall to insist on pushing ahead with their overwhelmingly rejected agenda?

Mr Obama may have succeeded in pulling the wool over the eyes of the AIPAC delegates who opted for “respect” and propriety when what they should have done was haul him onto the carpet for daring to gamble with Israel’s survival.

But there are millions of true friends of Israel and America who understand that the president has chosen – again, carefully and deliberately – to make common purpose with the enemies of the Jewish people and their state.

Consequently President Obama (but not his nation) has positioned himself as an enemy of Israel too.