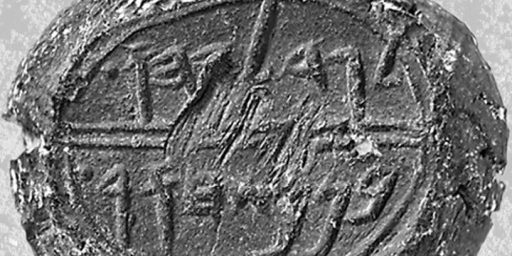 One of the most prominent Israeli archaeologists declared today that remains from the First and Second Jewish Temple period – including the Second Temple itself – lie underneath the Temple Mount surface, just waiting to be excavated.

Dr. Eilat Mazar of Hebrew University accused the site’s Islamic custodians of destroying Jewish artifacts while attempting to turn the Temple Mount into a “giant mosque.”

“I think we will find all the remains starting from the First Temple period and remains of the Temple itself,” said Mazar, a third-generation archeologist. “I mean, no one took it out, it’s there.”

Continued Mazar: “I am absolutely sure, in light of my very rich experience excavating Jerusalem for 30 years now, all these remains are waiting to be revealed. And if it can’t be done nowadays because of all kinds of sensitivities, at least we should take care that it won’t be ruined for future excavations when time comes.”

Mazar heads the excavation department at the City of David, an archaeological village at the foot of the Temple Mount said to be the place where King David built his palace and established his capital.

Mazar has led digs that discovered multiple Temple-era remains, including a tunnel used by the Israelites to conquer Jerusalem, as well as the world’s largest ritual bath.

Mazar was speaking to Klein in light of the recent publication of a report by Israeli State Comptroller Micha Lindenstrauss, which included a special, largely secret section accusing the Wafq of disposing of Jewish artifacts.

Citing security concerns, the majority of the special report on the mount was not published, but the small portion made public revealed severe deficiencies in Israeli oversight of Islamic construction that has been done on the mount.

The report fingered four Israeli state agencies – the police, the Antiquities Authority, the Jerusalem municipality and the Justice Ministry – for not doing enough to conduct continuous supervision of Wafq construction.

“Protection of artifacts from the Temple Mount and preventing their ruin is a public goal of the first order,” the report states. “It is important to note that any digging and other works on the Temple Mount must be conducted in consideration of the character of the place and after receiving all required permits and meeting all archeological guidelines. As a rule, use of heavy machinery should be avoided.”

The reference to heavy machinery referred to a decision in 2007 by then-Prime Minister Ehud Olmert to allow the Waqf to use a heavy tractor to dig a 1,300-foot trench around the periphery of the Mount. The Waqf claimed the trench was necessary to replace electrical cables outside mosques on the site.

At the time, the Waqf was accused of destroying artifacts it found at the site.

Allowing the use of bulldozers at any sensitive archaeological site is extremely unusual, particularly at the Temple Mount, which experts say contains sealed layers of artifacts as shallow as two to three feet below the surface.

The mount never has been properly excavated. Heavy equipment could easily damage any existing artifacts, stressed Israeli experts at the time, who asserted the area should be excavated slowly and carefully by hand.

The last time the Waqf conducted a large dig on the Temple Mount – during construction in 1998 of a massive mosque at an area referred to as Solomon’s Stables – the Waqf reportedly disposed of truckloads of dirt containing Jewish artifacts from the First and Second Temple periods.

After media reported the disposals, Israeli authorities froze the construction permit given to the Waqf, and the dirt was transferred to Israeli archaeologists for analysis.

The Israeli authorities found scores of Jewish Temple relics in the nearly disposed dirt, including coins with Hebrew writing referencing the Temple, part of a Hasmonean lamp, several other Second Temple lamps, Temple-period pottery with Jewish markings, a marble pillar shaft and other Temple period artifacts.

WND reported that in 2008 Mazar and a team of archaeologists unearthed what’s believed to be the royal seal of an Old Testament prince who is said to have tossed the prophet Jeremiah down a well.

The stamped engraving, known as a “bulla,” was discovered about 600 feet south of the Temple Mount in clay, astonishingly well-preserved, bearing the name of Gedaliah, the son of Pashur.

“How absolutely fantastic and special this find is can only be realized when you hold in your hand this magnificent one-centimeter piece of clay and know that it survived 2,600 years in the debris of the destruction, and came to us complete and in perfect condition,” Mazar said.

Yes, the Bible is completely true, but you may never have heard the spectacular, ultimate destiny God has in store for you. It’s much more glorious than just floating around on clouds playing harp music! Find out what you’ve never been told, direct from your very own Bible!

Gedaliah is mentioned by name in Jeremiah 38:1 as he served Judah’s King Zedekiah in the final days before Jerusalem was conquered by Babylon’s King Nebuchadnezzar in 586 B.C.

The prophet’s writings tell of the actions that Gedaliah and his fellow princes took against him:

“Then took they Jeremiah, and cast him into the dungeon of Malchiah the son of Hammelech, that was in the court of the prison: and they let down Jeremiah with cords. And in the dungeon there was no water, but mire: so Jeremiah sunk in the mire.” (Jeremiah 38:6)

The letters on the seal are in ancient Hebrew, and Mazar told WND the relic was recovered through a wet-sifting process. She says the method was learned after the “illegal excavations” by the Waqf, the Islamic custodians of the Temple Mount, who have been dumping debris in huge mounds.

“The wet sifting that we did for the destruction debris from our excavations indeed allowed us to uncover hundreds of different kinds of small finds such as tiny fish bones, Phoenician glass beads, Hebrew, Babylonian and Egyptian bullae and seals, pits and seeds, hematite and limestone weights, arrowheads, figurines, jewelry and more,” she said.

She added, “It is not very often that such a discovery happens to archaeologists in which real figures of the past shake off the dust of history and so vividly revive the stories of the Bible.”