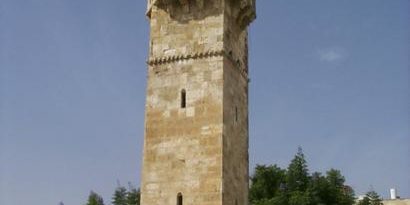 Israel is today celebrating Yom Yerushalayim – Jerusalem Day – the return to Jewish sovereignty of the 3000-year plus capital of the Jewish people.*

Since Independence Day on May 9, Jerusalem has been literally swarming with Jews from around the country and around the world. They have been hiking its streets, descending and ascending its valleys and hills, singing as they streamed in through its gates and walked its ramparts. Everywhere, the large sky-blue Star of David on its snow-white background has been waved in love and admiration and pride.

No nation has a capital like this one – where once their greatest king sat enthroned; wherein they were brutalized and massacred, and from which they were driven, thousands of years ago, into what surely seemed to be a dark and endless night. No other people has a city from which they were kept for century after century, and for which they prayed year after year after year, vowing: “If I forget you, O Jerusalem, let my right hand lose its cunning; let my tongue cleave to the roof of my mouth if I do not remember, if I do not prefer Jerusalem above my chief joy.”

Nowhere is it recorded that people in exile for years and decades – let alone centuries – would gather to regularly pledge their determination to return to their land or their capital. But the Jew – eking out a brittle existence in the Pale of Settlement; being expelled from country after country to face a perilous future; hiding from the Crusaders or fleeing from the Inquisitors, even waiting his turn to be sent to the gas chambers of the Third Reich – everywhere and anywhere he resolutely declared and affirmed: “Next year, in Jerusalem.”

It took a long, long time. No less than 1,987 years would pass from the AD 70 destruction of Jerusalem by the Romans to the city’s return to Jewish sovereignty in the Six Day War. And since it has been back in Israel’s hands, Jerusalem has exploded with growth that is ongoing around the clock.

Speaking at a special session of the Knesset today (Wednesday), Prime Minister Benjamin Netanyahu said that, before 1967, Jerusalem was “suffocating, a city that did not develop, that was frozen.

Earlier this week the Israeli cabinet held its weekly meeting in a special venue – the Tower of David inside the Old City’s Jaffa Gate. The Old City was under Jordanian occupation until the Six Day War and as such is labeled by Israel’s enemies as part of “occupied East Jerusalem.”

Some of those enemies slammed the meeting as “illegal under international law.” The Secretary General of the United Nations, Ban ki Moon in March called Israel’s building of homes for Jews in Jerusalem “immoral.”

The so-called Palestinian so-called prime minister, Salam Fayyad this week told his people that “the Palestinian Authority is committed to not only protecting and its inhabitants, but to making the city Palestine’s eternal capital.”

Fayyad spelled out how Jerusalem was a weapon that the Arabs could wield against Israel in the “peace process.”

“What is needed is an effort on behalf of the Palestinian Authority to put the city on the top of its priority list as part of efforts to realize a Palestinian state. There must be a full support for our right to self determination and dignity with Jerusalem as our capital based on the 1967 borders. … East Jerusalem will forever be the capital of Palestine.”

Netanyahu’s message to the United States Congress last week: “Jerusalem must never again be divided; Jerusalem must remain the united capital of Israel.”

As Christians who have read the words of Jesus where, weeping over Jerusalem in foreknowledge of its destruction, He foretold that the city would not see Him again until it was ready to welcome Him (Matthew 23:37-39); and where He told the disciples that Jerusalem would be “trampled by Gentiles until the times of the Gentiles are fulfilled;” we rejoice that Jerusalem is no longer under Gentile control.

And we look ahead to the day when the city of peace that has known no peace will finally be ready to welcome the Prince of Peace (Isaiah 9:6) to the City of the great King (Psalm 48:2; Matthew 5:35).

*Israel’s celebration takes place on the Jewish calendar date on which Israel took control of their city. Friends of Israel will celebrate the day according to the Gregorian calendar date of the same event.