Where fear and blindness dominate 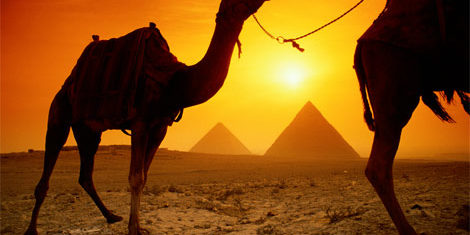 Of course, Egypt is different. The problem will not be as large or intense as Iran. As the Shakespearean character Mercutio said when given a fatal wound: “No, ’tis not so deep as a well, nor so wide as a church-door; but ’tis enough; ’twill serve.”

There was recently a violent demonstration at the Israeli Embassy in Cairo.

The protesters set fire to an Israeli flag and demanded that the Israeli ambassador be expelled. They attempted to storm the embassy; 185 people were arrested, 18 police were injured.

The demonstration was organized on Facebook by the April 6 Youth Movement – the same “moderate” and “democratic” group so highly praised in the West for “leading” the Egyptian revolution.

Asmaa Mahfouz is a leader of the movement. In fact, she claims that she personally began the revolution with a video calling for demonstrations.

Now, Mahfouz is trying to launch a new revolution against the military rulers.

One of the reasons she’s protesting the transitional military regime is that the army protected the Israeli Embassy from being seized by the demonstrators.

President Barack Obama believes these people are the hope for the future, and backs them 100 percent. Of course, there are moderate democrats supporting the movement in Egypt, but they are few, and terrible at organizing a political structure. There is no strong moderate party running in the parliamentary elections. The Muslim Brotherhood is well-organized. Smaller Islamist and radical leftist parties are organized.

The dominant emotion in Egypt today is fear. The dominant response in the West is blindness.

MEANWHILE, AN Egyptian court took Egyptian citizenship away from a leading Coptic Christian activist and banned him from entering the country.

Among the charges was supposedly insulting Islam and asking the United States and Israel to interfere in Egypt’s internal affairs.

Former deputy head of Egypt’s Court of Appeals Judge Mahmoud al-Khodheiri gave an interview on Al Jazeera and said: “We should stop exporting natural gas to Israel. I consider the export of gas to Israel an act of treason, and we should stop it. I salute the people who bombed the gas pipe, because this is my blood that is being transferred to my enemy.”

A man who’s been a high-ranking judge salutes terrorists who blow up a pipeline. Yet judges are supposed to uphold the rule of law. If a judge can cheer those who blow things up, that opens the door to supporting other acts of lawless violence. Wherever Khodheiri draws the line, others will find justification for mayhem. Attack Christians? Kill Jews? Assassinate secularists or government officials? Once lawlessness is rationalized as absolute right, there are no limits.

A former high-ranking judge calls for ignoring a legal contract. Of course, he could call for renegotiating the contract through legal channels, but that isn’t what he did. So the acceptable response to an agreement where you aren’t currently gaining an advantage is violent, unilateral abrogation.

What does this tell us about other agreements/contracts that Israel might make with Arab neighbors or the Palestinians? Israel is an enemy. Despite a peace treaty signed 33 years ago, most Egyptians regard this as a temporary truce. The return of the Sinai and the reopening of the Suez Canal and of Egyptian oil fields in western Sinai do not suffice to make them feel at peace with Israel, whatever continuing sympathy and support they might give the Palestinians. Nor does Israel’s withdrawal from the Gaza Strip, the creation of the Palestinian Authority or Israel’s acceptance of its arming. Why should we believe that Israel’s turnover of east Jerusalem and the West Bank, and the creation of a Palestinian state, would change anything? Selling gas is “treason.” And what does one do to traitors in the Arabicspeaking world? One kills them. While Khodheiri isn’t a cleric, he has been a career judge, one of the people who lay down the law of the state, as Muslim clerics rule on Shari’a (Islamic) law. So in a real sense, what he has done is issue what one might call a “secular fatwa.”

If an official of Egypt’s energy authority is murdered tomorrow, the killers can cite Khodheiri as justifying it, just as previous killers, or the would-be assassin of Naguib Mafouz – Egypt’s great novelist – rationalized their acts because of clerics’ statements.

Remember, Khodheiri is a Mubarak-appointed judge! What will the judges selected by the next government sound like? Finally, “blood.” The resort to passion rather than reason is dangerous. The English-language expression “as sober as a judge” doesn’t just refer to intoxication but to a “judicious temperament” – calm, cool and rational.

If judges call for violence and murder, invoking blood and treason, how might common people behave? What example is being offered to the national political culture? Obama and European leaders don’t get it. We are about to be projected back to the bad old days of radical Arab nationalist regimes competing with each other in militancy, anti-Americanism and hatred of Israel. Except this time they’re Islamists, and that’s worse.

When top judges yell for fire and vengeance, your society is in real trouble.

And so are its neighbors. No democratic state can be built on such a foundation.

Ignore all those soothing and ignorant “experts” on television and in the papers.

Here comes the judge. And he’s a hanging judge.