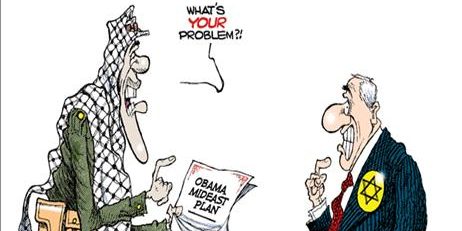 The May 20, 2011 meeting between Prime Minister Netanyahu and President Obama highlighted the unbridgeable gap between the two.

Netanyahu cannot bridge the gap between himself and Obama, as long as the President assumes that the ethnic, religious, tribal and ideologically violent power struggles on the Arab Street constitute “a story of self-determination” and “the vanguard of democracy.”

Netanyahu cannot bridge the gap between himself and Obama as long as the President’s world view is heavily shaped by his senior advisers: Valery Jarrett, who is the favorite of Muslim organizations in the US, Ambassador Susan Rice, who considers Israel part of the exploiting Western World and the Palestinians part of the exploited Third Word, and Samantha Power, who is one of Israel’s harshest critics in the US. In addition, Obama considers Prof. Rashid Khalidi, who was a key PLO spokesman in the US, a luminary on the Arab-Israeli conflict.

Netanyahu cannot bridge the gap between himself and Obama, as long as the President’s underlying assumption is that the Palestinian issue is the root cause of Middle East turbulence, the core cause of anti-US Islamic terrorism and the crown jewel of Arab policy-making. Obama ignores the fact that recent intra-Arab turmoil – as was the case with the intra-Arab turmoil of the last 1,400 years – has been totally independent of the Palestinian issue, of the Arab-Israeli conflict, of Israel’s policies or of Israel’s existence. In fact, the recent turmoil has clarified the secondary/marginal role played by the Palestinian issue in shaping Middle East developments in general, and Arab priorities in particular.

Netanyahu cannot bridge the gap between himself and Obama, as long as the President assumes that Israel can be secure – in the most violent and volatile region of the world – within the 1967 borders. Such borders would rob the Jewish State of its Cradle of History and would reduce its waistline to 9-15 miles (over-towered by the mountain ridges of Judea and Samaria): the distance between JFK and LaGuardia airports, between the Kennedy Center and RFK Stadium, between Columbia University and Wall Street and the length of DFW airport. How can the gap be bridged when Obama does not realize the correlation between Middle East instability, uncertainty, volatility and violence on one hand, and security requirements on the other hand?! Recent seismic developments in Arab countries have intensified Israel’s security requirements, dramatically enhancing the strategic value of the mountain ridges of Judea and Samaria.

How can the gap be bridged when Obama considers the 1967 Lines, and not hate-education in Abu Mazen’s schools, media and mosques, the crux of the conflict?

Was Netanyahu’s criticism of Obama’s focus on the 1967 Lines an over-reaction?

Presidents Reagan and Bush attempted to impose territorial concessions on Prime Minister Shamir. Shamir defied the pressure, expanded Jewish communities in Judea and Samaria, was severely criticized, but engineered unprecedented bilateral strategic cooperation. President Nixon presented Prime Minister Golda Meir with the “Rogers Plan,” calling for a total withdrawal. Golda reacted by constructing four new Jerusalem neighborhoods, beyond the Green Line (150,000 residents). President Johnson pressured Prime Minister Eshkol against building in East Jerusalem and reuniting Jerusalem. Eshkol built beyond the Green Line and reunited the Capital of the Jewish People. The US pressured Prime Minister Ben Gurion not to declare independence, to end “occupation” in the Negev, to absorb Palestinian refugees and accept the internationalization of the whole of Jerusalem. Ben Gurion defied all demands.

The current disagreements between Netanyahu and Obama center on the Palestinian issue, which is not a major component of US-Israel relations; instead, that relationship is based on shared values, joint interests and mutual threats, which have been intensified by the intra-Arab upheaval. This upheaval underlines Israel as the only stable, credible, reliable, capable, democratic and unconditional ally of the US.

Obama’s attitude toward the Jewish State represents a minority within the Democratic Party, among all Americans and in Congress – the most authentic representative of the American people – which has supported the idea of a Jewish State since the 18th century. Congress possesses the power to initiate policies and to suspend, amend or turn around presidential policies.

Netanyahu should focus on enhanced US-Israel strategic cooperation, in the face of turbulent Middle East reality, the mounting threats to US interests, the absence of any reliable/capable Arab ally, the intensified Iranian threat, the increased Russian and Chinese profile in the Middle East and the concerns about a post-US-withdrawal eruption of an Iraqi volcano. He should propose to Congress and to the President specific bilateral projects, which expand US and Israel employment and export, while upgrading US and Israeli national security, as well as the development of energy alternatives, water technologies and homeland security.

Such projects would bolster the unique nature of US-Israel relations: A two way mutually-beneficial street.