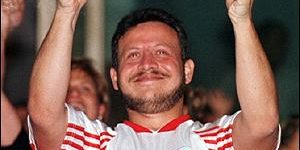 King Abdullah of Jordan, preceding Binyamin Netanyahu to Washington, meets today with U.S. President Barack Obama after having met yesterday at the State Department, with Secretary of State Hillary Clinton.

The Jordanian monarch was obviously focused on disputing two major Israeli arguments, namely, that the “Arab Spring” demonstrates that Israel is not the main issue and that the reconciliation agreement between Hamas and Fatah has effectively derailed any putative peace process.

Both before his meeting with Secretary of State Clinton as well as at an address at the Brookings Institution, the key think tank for Democratic administrations, King Abdullah remarked that the “core issue still is that of the Israelis and Palestinians.” He warned that if unresolved, the Palestinian-Israeli conflict will escalate regional tension and negatively affect the future of the region’s peoples.

The King also lauded the Hamas-Fatah reconciliation agreement as an “important step” that will contribute to unifying the Palestinian internal front, improving the living conditions of the Palestinian people and enabling them to build a better future.

Secretary Clinton welcomed the King as “an influential and stable voice in a turbulent region and changing world,” and called Jordan an important and strategic partner of the US. There were no public comments on the need for democratic reforms in the monarchy.

The Jordanian ruler called upon the international community to exert more efforts to relaunch direct talks between the Palestinians and Israelis leading to the establishment of an independent Palestinian state living in peace and harmony alongside Israel, and emphasized the US role.

Abdullah also used the opportunity to appeal to Jewish American organizations, beseeching them to encourage a process leading to a two-state solution.

Jordan together with Morocco has recently entered the Gulf Cooperation Council that is increasingly assuming the role of a mutual insurance policy against attempts to overthrow ruling Arab dynasties. Abdullah explains the new Jordanian membership as helping to improve relations with the Gulf States.