Netanyahu: We are determined to defend our borders 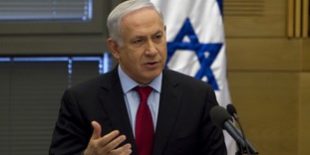 Prime Minister Binyamin Netanyahu addressed the events of Nakba Day on Sunday, particualrly attempts to infiltrate Israel’s borders with Syria, Lebanon and the Gaza Strip, saying “we are determined to defend our borders.”

Netanyahu stated that he instructed the IDF to act with restraint, but to stop all attempts at infiltration and challenges to Israel’s sovereignty.

The prime minister said that the Nakba Day protesters were not fighting for the 1967 borders as they claim, but were denying Israel’s right to exist.

“We must understand who and what we are up against,” Netanyahu said in a televised statement.