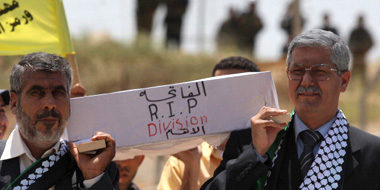 With Osama Bin Laden now in the bag, a triumphant President Barack Obama will be searching for new promises to keep—like clinching the comprehensive Arab-Israeli peace treaty that he promised the world during his first two years in office. And since any lasting peace deal between Israel and the Palestinians must include Hamas, it is no wonder that the White House seemed untroubled by the recent announcement of a pact between Fatah and Hamas, whose leadership greeted Bin Laden’s death with proclamations that the al-Qaida boss was a “martyr” and a “holy warrior.” Some in the White House are letting it be known that the administration believes the Hamas-Fatah reconciliation may be even a good thing for U.S. strategic interests.

Presumably, when Benjamin Netanyahu gets to Washington next week, the Hamas-Fatah deal is going to be at the top of his talking points. Even those in the pro-Israel camp who were pushing the prime minister to make concessions to the Palestinians recognize that this new partnership jeopardizes the entire peace process. All the money and prestige the United States and European Union have poured into the Palestinian issue has come to this: The carefully tended moderate camp has merged with the extremists. Of course, some will argue that the deal is a sign of Hamas’ weakness and that Fatah will help moderate the Islamic Resistance movement that rules Gaza. In other words, Palestinian unification is all about exposing the Palestinians’ true colors. If you’re a peace-process pessimist, it shows Fatah’s latent extremism; if you’re an optimist, it will make clear Hamas’ pragmatism.

I, too, think the deal reveals something important, which is why I am a big fan of Hamas-Fatah reconciliation—not because I think it will make peace likely, but because I think it is the only way to expose the hypocrisy and moral rot that has been at the core of Western thinking about the Arab-Israeli conflict for more than 30 years.

Osama Bin Laden’s death offers a good opportunity to take stock of the larger incoherence of American Middle East policy, whose most outstanding feature seems to be an inability to tell our friends from our foes. One easy yardstick to use might be this: If you enthusiastically support a man whose grand strategy consisted of killing as many Americans as possible then you are our enemy. So, why are we seemingly insensible to the fact that Hamas mourned Osama’s passing and its leader in Gaza, Ismail Haniya, the elected prime minister of the Palestinian Authority, said that his killing was a “continuation of the United States’ policy of destruction”?

I’m actually more comfortable with Haniya’s public devotion to Bin Laden’s memory than with Palestinian Authority Prime Minister Salam Fayyad’s conviction that the al-Qaida chief’s death will “mark the beginning of the end of a violent era.” To be fair, though, I suspect Fayyad really means his encouraging words, but in terms of American strategy his statements are useful only as fodder for Western publications that have an interest in furthering the fantastical narrative of Palestinian moderates waiting patiently in Ramallah to make peace while enduring the daily humiliations of a pointless Israeli occupation. Fayyad also says he was “not aware” of Hamas’ condemnation of the killing, which is absurd because his life depends on his knowing what Hamas says about everything—just as his U.S.-sponsored salary and the institutions he seeks to build require him to oppose Hamas. In short, Fayyad is an American invention, the latest in a long series of moderate phantoms that we summon forth to hide the gap between the way we want the world to be and a reality that is often cruel but not often difficult to fathom.

The original model of the imaginary Palestinian moderate was none other than Yasser Arafat, a lifelong believer in one Palestine, who never peddled any illusions about his ultimate aims or the violent methods he was willing to employ in order to achieve them. The myth of the moderate Arafat, the Nobel peace prize winner, the Palestinian Mandela, was a Western invention . His 1974 U.N. speech promising either an olive branch or a freedom fighter’s gun was clear: If I don’t have peace on my terms, there will be death. This was two years after the massacre of Israeli athletes at the Munich Olympics and only months after he’d personally ordered the assassination of American diplomats in Sudan. What was Arafat’s peace? He was always clear about this—it meant Israel’s destruction.

To fulfill those ends, Arafat tried to topple the king of Jordan and then drove Lebanon to civil war in the 1970s and ’80s. When the Israelis and Syrians finally drove him out of Beirut, Western policymakers rescued Arafat from watching Tom and Jerry cartoons in Tunis. A Palestinian-Israeli agreement was to be part of Bill Clinton’s peace dividend, and the Americans gave Arafat a makeover. Despite all the evidence to the contrary, he was reconstituted as a man of peace.

Arafat never asked for the Nobel Peace Prize he shared with Shimon Peres and Yitzhak Rabin in 1994. It was given to him as part of a Western pantomime. He announced his intentions clearly when he said that the Palestinian movement had made a “strategic choice” for peace. But if peace itself isn’t the point, then what could possibly be the larger strategy, except the final elimination of Israel?

But why blame Arafat, or any of the Palestinian leadership, including Hamas, for taking American and European money, not giving anything in return, and saying they want more? They believe they’re in the right and that the land they get from Israel is theirs by right. The Palestinians, after all, do not see themselves as the beneficiaries of an international goodwill society, to whom they should be grateful. They are a real people who fight, kill, and die for what they believe in.

Rather, Palestinian unification reveals the moral and intellectual bankruptcy of the American and other Western policymakers who have been peddling a fantasy of Palestinian moderation and peaceful coexistence for more than 30 years. It is time for us to realize that the suggestion that fine words about peace will discourage people from shooting at each other is not clever or hopeful or even naïve: It is actively immoral. The Palestinians aren’t the liars; we are.