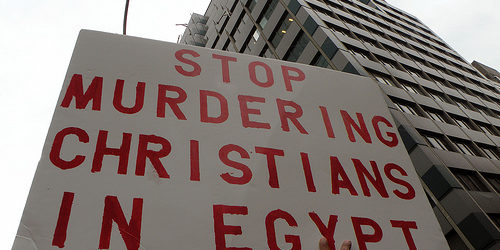 An attack by Muslims on two churches in Cairo led to sectarian clashes that claimed at least 12 lives, a reminder that Egypt’s religious rift has continued to widen since the successful uprising that pushed Hosni Mubarak from power.

The violence in the Cairo neighborhood of Imbaba, declared in the 1990’s to be “liberated” from the Egyptian state by Islamist militants, also highlights the growing role the salafis, a small and strident Muslim sect, are playing in exacerbating sectarian tensions. The salafy strain of Islam, which feeds most militant Sunni movements, was publicly repressed under Mubarak and has been taking advantage of the more open environment since his downfall.

“There is no security in Egypt,” says Rober, a 23-year member of the Virgin Mary church, which was largely reduced to a smoldering hulk after it was set alight Saturday night. He stood in a burned-out stairway and watched as a woman walked past, weeping. “This is only the beginning. I’m afraid for my sister, for my mother, from the salafis.”

On Sunday, stories of what happened Saturday night varied wildly in Imbaba’s maze of dirt alleyways. The sprawling neighborhood on the west side of the Nile is poor and mostly Muslim, but has large pockets of Coptic Christians, who account for as much as 10 percent of Egypt’s population. The sectarian violence also left at least 232 injured and saw police and army forces move into the area and impose a curfew. They blocked access to the St. Mina church, where the violence began.

Christian witnesses say St. Mina was attacked by a group of armed salafis carrying Ak-47s and throwing Molotov cocktails on Saturday. The witnesses say the attackers accused the church of abducting a woman who had converted from Christianity to Islam, and also destroyed a nearby Christian apartment building and a Christian-owned shop before setting the Virgin Mary church on fire.

The violence started when rumors spread that Christians had abducted a woman who had converted to Islam and married a Muslim man, and were holding her inside St. Mina church. Christians said the rumor was false, and there was no such woman. Alleged female conversions and abductions have been a flashpoint for sectarian tensions for years.

Last year Camillia Shehata, the wife of a Coptic priest, allegedly disappeared for days. Muslims claimed the church had abducted her when she tried to convert to Islam. Salafis have continued to hold protests demanding her “release.”

That storyline spawned violence in Iraq, where a group associated with Al Qaeda attacked a church, killing dozens, and called for attacks on churches in Egypt. One did come, on a church in Alexandria on Jan. 1. An apparent suicide bomber killed more than 20 Christians, though no group ever claimed responsibility for the bombing and it was unclear if it was related to the issue of Camillia Shehata.

Christians have faced discrimination, particularly in the application of justice when they face sectarian attacks. Mubarak’s regime refused to acknowledge a sectarian dimension to such attacks. And sometimes authorities imposed forced reconciliation instead of bringing Muslim attackers to justice.

Muslims in the area say that the Christians were armed and attacked first. An Egyptian Army officer standing guard Sunday said that when he arrived Saturday, there were no salafis but two groups of men were fighting each other, and that weapons were fired from within the church. The clashes ran from about 8:30 on Saturday night until early the next morning local time.

Father Mattias Elias, priest of the Virgin Mary church for more than 30 years, says “salafi terrorists” set the church on fire. “We have faith and hope (that) G0d will change what is happening. But practically, we need leadership from the Army, the security forces,” he says, sitting in a burned-out former sanctuary, next to the gutted baptismal room where the fire killed a church employee.

The walls and ceiling of the room are blackened, a ceiling fan’s blades melted into haunting shapes. A partially burnt altar curtain sits in the corner with children’s Bible story books. Acrid smoke hangs in the air.

Hossam Bahgat says the attempt to break into a church to rescue an alleged hostage is “unprecedented.” Bahgat runs the Egyptian Initiative for Personal Rights, a group that has documented sectarian attacks for years. He also says it is “disturbing” that Christians reportedly used violence in response to the attack. The sentiment that seems to be growing among the Christian community is that “they are going to use force to protect themselves if the state continues to fail to protect them.”

“This is why I think we’re seeing this time such a strong response from the Supreme Council of Armed Forces and the Cabinet,” he says. “They seem to finally realize that the number one priority now, as far as the sectarian violence is concerned, is physical protection of individuals, communities and places of worship.”

The Supreme Council of the Armed Forces, the military government running Egypt, said it had arrested 190 people in connection with the attacks and would try them in military courts “as a deterrent to all those who think of toying with the potential of this nation.” Egypt’s prime minister delayed a trip to the Gulf to hold an emergency cabinet meeting and Egypt’s justice minister announced Egypt would use an “iron hand” against those trying to “tamper with the nation’s security.”