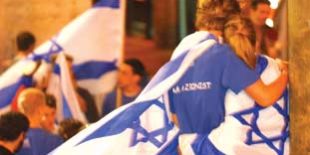 Celebrating the 63rd anniversary of Israel, one cannot help but be struck by the incongruity of conflating an ancient people, perhaps the world’s oldest still extant, with a birthday age befitting a baby boomer. Indeed, many of the dilemmas that face the Jewish people today have been around for centuries. And yet, while many aspects of “the Jewish question” have not been resolved, we have so much to be proud of and thankful for this Independence Day.

Zionism’s founders thought that the Jews’ “abnormal” status as weak and stateless was the cause of anti-Semitism.

They had hoped that by normalizing the Jewish condition via the creation of a Jewish state, “like all the nations,” Jews could finally put an end to their status as a pariah people. Originally, Zionists competed with assimilationists and Bundists, Reformists and Socialists.

But the Nazi Holocaust and the rise of the totalitarian Soviet Union put an end to the bickering.

Zionism emerged as the dominant and most dynamic Jewish movement to confront the challenges offered by modernity while taking advantage of its opportunities, including military technologies, to alleviate Jews’ tragic powerlessness. But although they were wildly successful at fulfilling their state-building goals, the Zionists did not – and have not – put an end to persistent anti-Semitism.

There are those who would argue that, if anything, Zionism has made the Jews’ predicament even more precarious.

Of the world’s three groupings that remained after the Holocaust – Israelis, American Jewry and Jews spread across the rest of the Diaspora – only the first group lives in daily range of rockets, mortar shells and missiles launched by rabid anti-Semites bent on destroying the Jewish state. Only Israelis are directly in danger of a nuclear Armageddon if Iran’s Islamic Republic manages to get its hands on the bomb. And while the sudden changes sweeping the region, currently optimistically described as the “Arab Spring,” might conceivably lead to the creation of stable democratic or semi-democratic regimes and the birth of a new Middle East, they could just as easily result in increased anti-Semitic extremism in the form of the Muslim Brotherhood and its various offshoots or some other reactionary Islamist dogma.

But such thinking overlooks the fact that, in Israel, the Jewish nation is also uniquely capable of defending itself and determining its own destiny.

The age-old prejudices of the anti-Semites remain largely the same. In the 18th and 19th centuries, individual Jews – even those, such as French army captain Alfred Dreyfus, who agreed to strip themselves of all vestiges of their heritage – found they could never integrate into European states as full citizens. Today, the hostility, hatred and bias of large parts of the international community have prevented Israel from being accepted by the nations of the world as an equal, no matter how accommodating Israel has indicated its readiness to be in negotiations with the Palestinian and no matter how fairly Israel fights its wars.

Israel’s very existence – the Jewish nation’s fundamental right to sovereignty in its historic homeland – continues to be constantly questioned. Inexplicably, similar claims are never made against states such as, say, Pakistan – which for years played host to Osama bin Laden while consuming vast amounts of American aid. Established a year before Israel was reestablished, its legitimacy – historic and moral – is eminently more deserving of scrutiny.

AND YET, notwithstanding the all too common rejection of Israel’s very right to exist, the misrepresentations of Israel’s daily narrative, and the numerous military threats Israel faces in this rapidly changing region, the Jewish state’s situation today is enviable compared to those long centuries of exile, wandering and powerlessness.

We have come a long, long way in ingathering the exiles. We are managing to reconcile the conflicting demands of a first world democracy and fealty to the religion that sustained us in exile. We enjoy a robust alliance of common values with the world’s single superpower.

And for all that we are threatened in our narrow strip of land, we are also unprecedentedly strong. We take for granted, when we hear former Mossad chief Meir Dagan argue that an air strike against Iran’s nuclear facilities would be “foolish,” that our military forces are skilled enough to be able to muster even so “foolish” an option.

We have accomplished all this while fighting conventional and unconventional wars, absorbing a vast and diverse immigrant population and providing basic democratic rights to all citizens, regardless of race, creed or religion. Not too bad for a state the age of your average baby boomer.