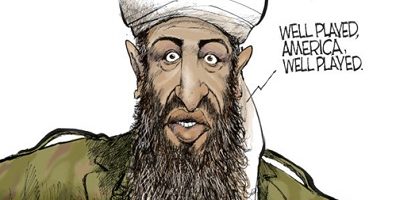 Osama bin Laden, the terrorist scourge who created the organization that murdered 3,000 Americans on 9/11, has been killed by American special forces in Pakistan.

The head of al-Qaeda was shot to death by US troops in a mansion outside of Abbottabad, Pakistan. Initial reports are sketchy, but the attack was carried out by Joint Special Operations Command forces working with the CIA. Confirmed reports say that the United States has the body of bin Laden and that DNA tests have confirmed that the remains were of the terrorist.

Full credit is due to the hardworking, patriotic professionals in American intelligence. Their singularly focused determination to track the terrorist and bring him to justice — a story just beginning to be told — is a testament to their hard work and dedication in the face of what appeared to be impossible odds. Finding one man in a country the size of Pakistan is an immense achievement in the history of American intelligence.

In remarks addressed to the American people, President Obama offered few details of the operation except to say that it was a small US force that moved into Pakistan, actuated by solid intelligence going back to August. In the past week, a high degree of certainty that Osama had been located was achieved, and the operation was launched on Sunday, according to the president. Officers killed bin Laden and took custody of the body.

CNN is reporting that Navy SEALs took part in the operation that President Obama says was sanctioned by the government of Pakistan. The network also reports that the Pakistani intelligence agency ISI participated in the operation, and that Pakistan gave vital assistance in processing the intelligence that led to bin Laden’s death. But anonymous administration officials say that they did not share the fact that the attack was going forward with anyone outside of the US government. This makes more sense than any reports of Pakistani assistance, since the ISI has always had close ties to al-Qaeda. It is believed the ISI tipped off bin Laden in 2002, allowing him to escape from Tora Bora.

No doubt President Zardari of Pakistan is trying to put the best face on the embarrassing fact that Americans can move without his knowledge and with impunity inside Pakistan, engage in a firefight on Pakistani soil, and remove the body of the world’s number one terrorist. If he were to admit that, it is likely he wouldn’t last a week. As it is, even with the fig leaf of “cooperation” supplied by the White House, demonstrators will be out in force on Monday protesting against the US and Zardari’s complicity in the death of bin Laden.

The helicopter raid originated in Afghanistan and the SEAL team tapped to carry out the attack was able to practice the assault several times before the operation went live. The entire operation took about 40 minutes to execute, according to the Pentagon.

Abbottabad is a city of 90,000 considered a suburb of Islamabad. The neighborhood where the mansion was located was upscale — home to many retired Pakistani military officers. It is not known how long bin Laden had been hiding there. It is believed he was chased out of hiding places in the rugged Northwest Frontier Provinces due to the deadly success of drone strikes that were very controversial in Pakistan but proved very effective at taking out high value al-Qaeda targets in the mountainous regions of the country.

Thousands of jubilant Americans gravitated to the White House chanting, “USA, USA” and waving numerous American flags. Their reaction is no doubt being repeated everywhere in the United States as a wave of unadulterated joy is sweeping the country. A great psychological weight seems to have been lifted from America’s citizenry, as news of the death of the taunting, cold blooded killer spreads.

Many thousands more gathered at Ground Zero in New York, singing “God Bless America” and waving flags. But the reaction there was understandably muted as many stood silently, alone with their thoughts, remembering an impossibly bright September day that ended in fire, and smoke, and death.

At a time of economic despair and uncertainty, a time of doubting our abilities to overcome obstacles and questioning our national greatness, the death of Osama bin Laden temporarily, at least, has lifted nation’s spirits and reminded us who we are and of what we are capable.

But it is important to remember that bin Laden’s death is more a symbolic statement — a clear marker on the long road to victory over Islamic extremism. He was a symbol of Islamic hatred toward the United States and the march of modernity that is being so fiercely resisted by the remnants of al-Qaeda, their franchises around the world, the Taliban, and other Islamic terrorist groups from Hamas, to Hezballah, to the Muslim Brotherhood. It is a blow to their self-esteem and their belief in the ultimate victory of their cause. That he should be shot down in a brilliant operation carried out by the American military only pours salt in their wounds.

Of course, with every victory in this war comes the realization that the enemy will seek to retaliate as quickly and as brutally as they can. The State Department has issued a travel warning, telling Americans abroad that there is an “enhanced potential for anti-American violence” in many areas where al-Qaeda garnered sympathy.

President Obama called former President Bush and gave him the good news. Bush issued a statementcalling the event a “momentous achievement” that “marks a victory for America, for people who seek peace around the world, and for all those who lost loved ones on September 11, 2001.”

More of this story will no doubt come out in the days and weeks ahead. But the epochal news that Osama bin Laden is dead will be a defining moment in the War on Terror and an event that serves to remind us that we can accomplish any goal as long as we put our minds to it.

Rick Moran is Blog Editor of The American Thinker, and Chicago Editor of PJ Media. His personal blog is Right Wing Nuthouse.