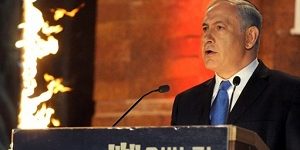 The world has not learned the lessons of the Holocaust but Israel has, Prime Minister Binyamin Netanyahu said on Sunday, at the beginning of Holocaust Martyrs’ and Heroes’ Remembrance Day.

Speaking at the official state ceremony held at Yad Vashem in Jerusalem honoring the six million Jews murdered by Nazis and their allies, the prime minister said the Jewish state was capable of defending itself against any potential threat.

“We must not bury our heads in the sand and dismiss the threat with cheap words,” he said. “Has the world learned the lesson of all this? I doubt it. Have we learned it? I believe so. May the whole world know that when Israel and the Israel Defense Forces say ‘Never again,’ we mean every word.”

At the same time, Netanyahu, who referred to Iran time and again throughout his speech, called on the world not to be indifferent to the perils posed by Tehran and hostile Islamist factions in the Middle East.

“It seems the world finds it easier to talk about the lessons of the past than identify them in the present and future,” he said. “But we, the Jewish people, cannot ignore the lessons of the Holocaust during these days. Because there are new tyrants who are upon us, and as they deny the Holocaust and call for the destruction of our people, Iran and its satellites – Hezbollah and Hamas – call and openly act to destroy the Jewish state.”

Addressing the international community, the prime minister said, “Civilized people around the world – all those who say they learned the lessons of the Holocaust – they must unequivocally denounce those who call for the destruction of the Jewish state. Iran is even arming itself with nuclear weapons to obtain that goal, and as of this moment the world has not stopped it. The threat to our existence, our future, is not theoretical, cannot be brushed aside, cannot be minimalized.

It stands right in front of us and humankind, and we must stop it.”

Iran also featured prominently during the speech delivered at the event by President Shimon Peres. He called the Islamic Republic’s leadership a “danger to the entire world.”

“Even after the Holocaust, a regime still exists whose leaders publicly deny the Holocaust,” Peres said. “This should make every person sick and shake their conscience. The fanatical leadership of Iran is a danger to the entire world, not just Israel, but to every household; a real danger to the future of the humankind. The nations of the world will not accept Iran having nuclear arms. They are now being tested.”

Israel holds its Holocaust memorial day each year on the 27th of Nisan, the anniversary of the 1943 Warsaw Ghetto Uprising according to the Hebrew calendar.

International Holocaust Remembrance Day in held on January 27, the date in 1945 when Auschwitz-Birkenau was liberated by Soviet troops.

Holocaust survivor Michael Goldman spoke at the ceremony at Yad Vashem on behalf of the more than 200,000 others who lived through the Nazi genocide and now reside in Israel.

Goldman described how yearning to live in a Jewish state helped him survive his ordeal.

“We never stopped believing in returning to Zion,” he said.

“In the hells of Auschwitz at night I quietly sang the song of Avigdor Hameiri: ‘On the top of Mount Scopus, shalom to thee Jerusalem.’ I never stopped believing our enemies will succumb.”

Holocaust memorial events will continue on Monday. At 10 a.m. sirens will blare and the nation will observe two minutes of silence. The remembrance day will end at sundown on Monday with a closing ceremony held at Kibbutz Yad Mordechai near Ashkelon, named in honor of Mordechai Anielewicz, who died fighting the Germans while in command of the Jewish Fighting Organization in the Warsaw Ghetto.