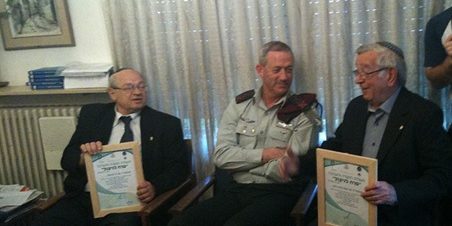 IDF Chief of Staff Benny Gantz was one of many IDF commanders and soldiers who took part on Sunday in a special project entitled “Flower to the Survivor.”

As part of the project, Gantz, along with the Chairman of the Foundation for the Benefit of Holocaust Victims in Israel, Elazar Stern, visited the home of Judge David Frankel, where he met Motti Yehuda Bok. Both men are Holocaust survivors, and during the meeting Gantz gave them a certificate and a flower, in recognition of their contribution to the establishment of Israel. The meeting, which took part on the eve of Holocaust Remembrance Day (Yom Hashoah), was also attended by Tanya Eliav, widow of long-time politician and educator Aryeh ‘Lova’ Eliav, who passed away last year and had served as captain of the ship on which Gantz’s parents came to Israel.

“Being able to take with you the memory of the Holocaust and decide to hold a personal life, a family life, the life of a country and the life of a nation is impressive and appreciated,” Gantz told the two survivors during the meeting.

As part of the “Flower to the Survivor” project, commanders and soldiers from all the different divisions in the IDF will meet in the coming month with 17,000 Holocaust survivors in their homes or in nursing homes. During the visits, the soldiers will be exposed to the personal testimony of the survivors and give them on behalf of the IDF and the State of Israel a flower and a certificate as a token of the bond between the IDF and Holocaust survivors.

The IDF’s Bamachane newspaper reported that the project is taking place for the fourth consecutive year and that three years ago, 9,000 survivors participated. According to the report, 10,000 officers and soldiers, including about 32 senior officers with the rank of Brigadier-General or higher, will participate in the project this year.

“If we do not acknowledge the older generation, the younger generations will not forgive us,” said Stern of the project. “This year we had a record number of survivors participating. This is proof of our society’s readiness to contribute. Today, more than ever, we must ensure that the survivors live the rest of their lives with the respect that they deserve, being the country’s founders and heroes.”