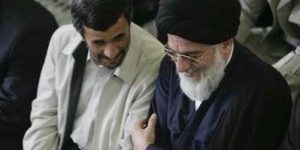 Reza Kahlili, a former member of the Iranian Revolutionary Guards Corps who spied for the CIA, obtained and released a secret documentary produced by the Iranian regime last month that claimed that President Ahmadinejad, Supreme Leader Khamenei and Hezbollah leader Hassan Nasrallah are the incarnations of prophesied figures. Their religious command is to lead a final war that destroys Israel to trigger the arrival of the Hidden Imam. The publication of this video has thrown a wrench into the regime’s plans by embroiling it in a political crisis.

The film had several startling revelations, such as that Ayatollah Khamenei believes he is required to lead an Arab coalition in destroying Israel and that the death of Saudi King Abdullah will be a green light for the sequence of End Times events to begin happening. The Muslim Brotherhood’s rise in the Arab world is viewed as the fulfillment of Islamic prophecy. Given Khamenei’s poor health and viewing of recent events as signs that the final war is to begin soon, the video could not be more chilling. Luckily, Kahlili’s release of the film is causing trouble for the regime.

The managing editor of Kayhan, a state newspaper, has criticized the film because he feels the West can use it as a weapon against Iran. Grand Ayatollah al-Sistani, the highest Shiite religious authority, has said it is a danger to Islam.

“The analysis for the timing of the Coming of the last imam is quite concerning. These analyses could weaken the very belief of Muslims. Such activities should not take place in Iran…This is very worrisome,” al-Sistani said. A top seminary in Qom has also rejected the equating of Ahmadinejad with Shoeib-Ebne Saleh, the End Times character who is to lead the recapturing of Jerusalem.

It is telling that the regime has not denied the arguments made in the film. The regime truly believes its contents. The producers of the film held a press conference after the controversy began to defend themselves and their product. They confirmed that it had been shown to Ahmadinejad and Khamenei for approval and that Khamenei nods when the chief of the Revolutionary Guards and senior clerics call him “Seyed Khorasani” during meetings. Khorasani is the prophesied figure who leads a nation from the East in a final war to prepare the way for the Hidden Imam’s emergence, according to the film.

“Many have asked him to verify his position and he has chosen silence. Well if it was not true, if it was not in accordance with his own belief, then wouldn’t the Supreme Leader come out and say this is not true and stop this argument?” one producer said. Indeed, on April 12, a representative of Khamenei told a state-run media outlet that several grand ayatollahs have endorsed the comparison.

Khalili told FrontPage at least one producer of the film has been arrested to stop him from making any more revelations. Ahmadinejad’s chief of staff, Esfandiar Rahim Mashaei, was fired on April 9. He has denied involvement in the film’s creation but Kahlili says his office was responsible for it.

“The in-fighting will not stop their plans for the final war. They will proceed as before, but with more careful steps….However, this should give us a big awakening that this is a defining moment in history where we can avoid another Holocaust,” Kahlili said.

All indications are that Iran’s plans are indeed moving forward and the stage is being set for war in Bahrain. On April 13, a representative of Khamenei referred to the uprising there as “the best opportunity to establish and prove Islam’s legitimacy to the world. And side by side with those oppressed people, it is also the best opportunity to begin setting the stage for the emergence of the 12th Imam, our Mahdi.”

Dispelling any notion that the film’s message is just a political tactic, the representative said, “First, it is natural that the Mahdi will go to war, but this war needs to be primed…It is true that we are the source of all revolutions, but now the source needs to create a ripple effect.” The Iranian regime truly does believe it is being instructed by Allah to lead this End Times war against Islam’s enemies and the current conflict in Bahrain is part of it.

Kahlili has done the world a favor by releasing this video, and the turmoil inside the regime that it has caused will hopefully inhibit Iran’s dangerous plans. More importantly, it is a wake-up call to the West: the smoking gun that details the Iranian regime’s beliefs and plans. Iran expert Ken Timmerman describes it as “nothing short of a declaration of war, an Iranian version of Hitler’s Mein Kampf, which after all in German means ‘my struggle’ or ‘my jihad.’”

The West couldn’t ask for a more clear warning of what is ahead. If this won’t wake it up, then it is frightening to think of what will.