Red Cross: There is no crisis in Gaza 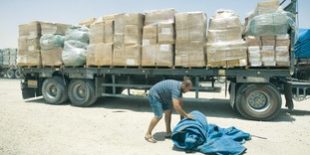 The Gaza Strip is not suffering from a humanitarian crisis, the deputy head of the Red Cross in Gaza said this week.

Mathilde Redmatn, who had been assigned to Congo and Colombia in the past, said that the “fabric of life” in the region was problematic.

“There are two peoples, one living under closure and one living under daily rocket fire, which violates international law,” she said. Her comments were made available on Thursday by the IDF Spokesman’s Office.

“There is no humanitarian crisis in Gaza. If you go to the supermarket, there are products. There are restaurants and a nice beach. The problem is mainly in maintenance of infrastructure and in access to goods, concrete for example,” Redmatn said.

“Israel has the legitimate right to protect the civilian population; this right should be balanced with the rights of 1.5 million people living in the Gaza Strip,” she said.

Redmatn condemned Gazan rocket attacks on southern Israel, while also calling on the government to allow more materials to enter the Strip.

“Rocket fire from the Gaza Strip is against international law because it is directed at civilians,” she said. “We conduct confidential or bilateral dialogue with Hamas on the matter. As time passes, the dialogue also develops.”

She said the Red Cross would continue to seek access to abducted IDF soldier Gilad Schalit – who will begin his sixth year of captivity on June 25 – but stressed that the organization lacked the capability to “force anything on Hamas.”

The Red Cross and the IDF are in close contact to “coordinate the entry of goods into Gaza and the entry and exit of people, sometimes our personnel and sometimes patients who are going to Israel to receive medical care,” she said.

The organization is now seeking to strengthen its relationship with soldiers stationed at the Erez border crossing and around the Gaza Strip, the official said.

“Our goal is not to negotiate peace, but to ensure the well-being of the civilian population,” Redmatn said. “We understand and recognize Israel’s right to security, but it needs to maintain the balance between that and the right of Palestinians living in Gaza to a living and to proper medical care. Of course this is also the responsibility of Hamas to its citizens and therefore we also have relations with them.”