Jerusalem in Prophecy, Part 3 of 5 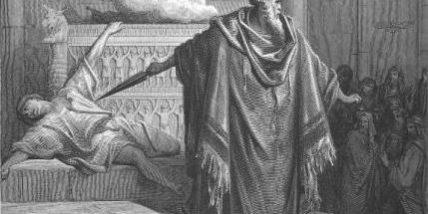 In this article, we continue our study of Jerusalem in prophecy by covering the period between the Testaments through the time of King Herod.

When Alexander died, he did not have a successor. His kingdom was divided among his generals who fought over control of his empire. The Greek generals who succeeded Alexander and ruled from Egypt were called the “Ptolemy.” They established a dynasty in Egypt from 301-198 BC. In Daniel 11, they are called the “King of the South.”

The Greek generals who succeeded Alexander and ruled from Syria were called the “Seleucids.” This is the King of the North mentioned in Daniel 11. Their dynasty was from 198-164 BC.

One of these Syrian kings was Antiochus Epiphanes (175-164 BC).  Antiochus sought to Hellenize all the territories under his rule, including Israel and Jerusalem. He forbade the Jewish people to practice their ancient faith. They could not practice circumcision, observe the Sabbath, celebrate the feasts, keep their dietary laws, study the Torah, or in any way, worship their God.

Antiochus erected a statue of Zeus in the Temple bearing his own image.  He built a new altar to Zeus on which he offered a sacrificial pig.  He then poured the pig’s blood over the Torah.

Antiochus erected shrines and altars throughout the land and forced the people to make sacrifices as tokens of their acceptance of the Greek gods. Those who disobeyed were tortured or killed. Their bodies were mutilated, and while still alive and breathing, they were crucified.  The wives and the sons whom they circumcised were strangled.  The mothers were then crucified with the dead bodies of their children made to hang around their necks.

Unfortunately, many of the leaders in Israel embraced Hellenism. However, the lovers of God rebelled. The revolt started in 167 BC when one of the king’s officers erected a pagan altar and commanded the people to sacrifice a pig as a show of loyalty to Antiochus.

The king’s officers ordered an aged priest named Mattathias to be the first to obey in order to set an example for the rest of the town. But he refused. When a local Jew stepped forwarded to make the sacrifice, Matththias killed him and the king’s officer. He and his five sons fled into the hills and began their revolt against Antiochus. The family which led the revolt was given the name “Maccabees.”

Although they did not have a chance, in the natural, to be victorious, God helped them to defeat Antiochus. With fighting going on in and around Jerusalem, it was only divine intervention that saved the city from destruction. In 164 BC, exactly three years after the altar to Zeus had been set up, the Temple in Jerusalem was cleansed, and the daily sacrifices and religious ceremonies resumed. That rededication of the Temple is still commemorated each December as Hanukkah, the Festival of Lights.

The Maccabees and their descendants, also known as the Hasmoneans, reestablished Jewish sovereignty over Israel with Jerusalem as the capital of the independent Jewish state. They maintained their independent rule for about 100 years from about 164-63 BC. It was during this time that the Sadducees and the Pharisees emerged along with other factions and groups that would influence events recorded in the New Testament. We learn of these factions and groups in the Apocryphal books of 1 and 2 Maccabees.

The Hasmonean descendants did not have the religious zeal of the earlier Maccabees. They wanted power and wealth. Over time, they began to fight among themselves for control over the land, the people and the resources. Their constant warring among themselves weakened their position at the same time the Romans were expanding their power in the region.

This civil conflict provided just the opportunity for the Roman general Pompey to establish Roman presence in Judea and Jerusalem. It was on the Sabbath in the Hebrew month of Sivan (June), 63 BC when Pompey’s soldiers broke through the walls of Jerusalem and entered the city. Pompey entered the Holy of Holies in the Temple expecting to plunder the Temple treasures. Instead, he found an empty Holy of Holies. While Pompey did not harm the actual city of Jerusalem he did establish Roman rule that would last for approximately six hundred years until the Muslim period.

Instead of ruling directly, the Romans appointed Herod as their puppet king. The gospel of Matthew (Matthew 2:1-2) tells us that Jesus was born in Bethlehem when Herod was king of Judea. Herod ruled from 37-4 BC. From all we know about Herod, we can best describe him as a charming, clever, cruel, paranoid, evil genius.

Herod was a very good administrator who was totally loyal to Rome. He built numerous monuments to Caesar and held festivals throughout the land which he dedicated to Caesar. Herod is best known for expanding the Temple in Jerusalem. This was a major building project he began in 20 BC and was not finished until 64 AD, many years after Herod had died. Herod’s expanded Temple was a magnificent structure and one of the wonders of the ancient world.

In connection to the Temple, Herod appointed the High Priest regardless of his ancestry or character. As a result, Temple administration and worship in the time of Jesus was very corrupt having been sold to the highest bidders. The Sadducee priests in Jerusalem made a fortune from the Temple activities. When Jesus became a threat to their power and position, they schemed to put him to death.

Before Herod died in 4 BC, he divided his kingdom among three of his sons. Archelaus (4 BC-6 AD) was given the most important rule in that it included Judea and Samaria. This means he had to administer Jerusalem. Unfortunately, he was not up to the task. He was an incompetent, unwise man who sought to rule by cruel force. This explains why Matthew tells us that Joseph and Mary decided to live in Nazareth rather than Bethlehem whey they returned to the land from Egypt (Matthew 2:19-23). They knew Jesus would be in danger if they lived in the territory governed by Archelaus.

Archelaus was so bad that two bitter enemies, the Jews and the Samaritans, joined forces and appealed to Augustus to have him removed. When Augustus saw how much they hated Archelaus, he know Archelaus could never keep the peace. He banished him in 6 AD and established direct Roman rule in the form of Roman governors.

The most famous of these Roman governors was Pilate who was governor from 26-36 BC. According to historical records, as well as the New Testament, Pilate was a cruel, cold-blooded, weak administrator. He executed prisoners without trials, slaughtered any group that he perceived as a threat, robbed the treasury of the Temple, greatly oppressed the residents of Jerusalem and mocked everything Judaism considered sacred.

Before He was arrested, Jesus anticipated Jerusalem’s future and gave this warning, “But when you see Jerusalem surrounded by armies, then know that its desolation is near. Then let those who are in Judea flee to the mountains, let those who are in the midst of her depart, and let not those who are in the country enter her. For these are the days of vengeance, that all things which are written may be fulfilled. But woe to those who are pregnant and to those who are nursing babies in those days! For there will be great distress in the land and wrath upon this people. And they will fall by the edge of the sword, and be led away captive into all nations. And Jerusalem will be trampled by Gentiles until the times of the Gentiles are fulfilled” (Luke 21:20-24).

Dr. Richard Booker is a bestselling author and speaker and the Founder of Sounds of the Trumpet and the Institute for Hebraic-Christian Studies. He is a contributing editor for the Jerusalem Connection. To learn more of his work, see his web site at: www.rbooker.com.