A traumatic Pessah in Jerusalem, 1948 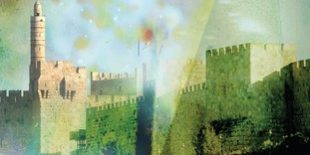 In early November 1947, Dorothy (Devora) Berman of Glasgow, aged 20, set sail for Palestine to participate in the “Machon LeMadrichei Chul” (Institute for Diaspora Youth Leadership) training program of the Jewish Agency in Jerusalem.

The program was held in conjunction with the Jewish National Fund. This was one of the earliest sessions of the famous Machon program which still functions today. The group was due to have left Jerusalem in March 1948 but was unable to leave the city due to the siege and was forced to remain in the city for Pessah and until the first cease-fire in June. Berman found herself witness to historical events of unprecedented drama and importance. She kept a diary in which she wrote every day, wrote long and detailed letters home, took photographs and saved mementos of the events around her. In the diary, she describes Seder night in Jerusalem in 1948 and how Haganah soldiers thwarted her efforts to make the place kosher for Pessah. She yelled at them, and the next day they left to fight in the battle for Sheikh Jarrah…

Everything was still. In the light of the full moon the spreading leaves of the trees remained almost rigid casting shadows all around. It was Pessah 1948. Slowly I wandered homewards towards Beth Hakerem, the garden suburb of Jerusalem with the words of Had Gadya still ringing in my ears. Some hours ago I had sung with all my heart “Next Year in Jerusalem Built Anew.”

I was happy to be in Eretz Yisrael for the privilege of adding these words, “Built Anew.” The road was deserted and as I walked alone the wolves howled to each other in the background. I wondered why they seemed louder than usual. I was keenly aware of my footsteps crouching the gravel under my feet. The atmosphere was hot and clammy, yet, the spasmodic rat-tat-tat of the machine guns echoing and re-echoing over the hills sent a shiver down my back. An eerie symphony.

Aviva, my roommate and I had exhausted ourselves trying to clear away all traces of hametz from our room. We had shifted beds, wardrobes and dressing tables, and in our bare feet thoroughly scrubbed the stone floor using part of our ration of drinking water for the purpose. All our blankets and bedding had hung for hours on the sunny balcony and every corner had been scoured. I remember feeling proud of a job well done.

Our fellow students were attending a public Seder in Jerusalem. Only Aviva and I were to sleep at home that night. I had arranged to meet in our room at midnight. Glancing at my watch, I saw that it was not far off 12 o’clock, and I hurried a little faster. When I reached the house, I raced upstairs and flung open the door of our room. A whiff of stifling hot sweaty air hit me on the face. I discerned dark figures on the beds. Someone murmured in Hebrew, “Shut that door.”

But I was just bewildered so I just stood and stared. I saw that three men, soldiers, were sleeping fully clad on top of my single little bed. Similarly there were three more on Aviva’s. Two or three or more, I couldn’t make out the number, stretched on the floor sleeping as soundly on stone as their ancestor Jacob had done before them. Then I saw the apple-core and the half eaten sandwich lying on the table beside my bed, with jam of some sort oozing out on the freshly laundered cloth that I had laid there only a short time ago.

Dirty paper bags and cigarette ends were scattered everywhere. At this I forgot myself, and launched into an angry tirade which I hurled at these poor fellows. I did not know what were they doing there nor did I really care at that moment. All I wanted to know was why they had brought in hametz. Did they not care that it was already Pessah? I remembered all my work and the satisfaction I had derived from it, so I continued to protest even louder than before.

Finally I slammed the door shut and opening one door after another of the rooms normally occupied by the other students; I found that in each the situation was the same. I rushed downstairs and was met by our harassed landlord, who quickly ushered me into a room in his own private part of the house. Aviva was already there waiting.

The following morning we watched the soldiers polishing their rifles in our garden. They were youngsters and seemed quite absorbed in what they were doing. We approached them and despite my regrettable conduct of the night before, they seemed anxious to be friendly. I asked why they had come and where they were going but they always avoided direct answers and in most cases replied evasively; “Don’t worry, you’ll see, everything will be all right.”

Before lunch they had gone. How many there must have been I cannot now recall but suddenly, the place which had been so busy all morning was now deadly quiet.

The battle was reported in the news the next day. Somewhere outside Jerusalem these boys had fought, fought to give me and others like me the right to sing on future Seder nights “Next Year in Jerusalem Built Anew.”

None of them survived the battle. I had thought they had desecrated the festival, yet they too had sung of Jerusalem and what is more they had given their lives for it.

Editor’s note: The battles for Sheikh Jarrah and its police station, Shuafat and Nebi Samuel were part of Operation Yevussi which aimed at taking control of Jerusalem from the British at the moment of their departure. But intelligence was faulty. The British were not yet ready to leave and blocked the advance of Hagana troops. Thirty-eight soldiers were killed and 56 wounded.

This article is an extract from the writer’s book, ‘A Voice from Jerusalem – Dorothy Berman’s War of Independence Diary’ compiled and edited by her son, Aubrey Isaacs. It was originally published in a Jewish newspaper in Scotland and later republished in the bulletin of “Hitachdut Olei Britania.” (The British olim organisation.)