Jerusalem in Prophecy, Part 2 of 5 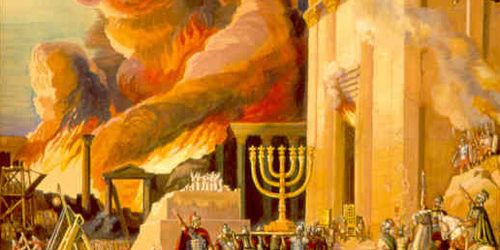 Since Jerusalem is the most famous city in the world, since it is God’s hometown and since it is the final destination for God’s people, it is most important that we have an understanding of Jerusalem in prophecy. In this article we will study Jerusalem from the ancient Canaanite period through the Second Temple Greek period.

The first mention of the city by the name of Yersuhalayim is in Joshua 10:1 where the King of Yershualayim makes an alliance to attack Joshua’s army.

In Joshua 18:28 the city is called, “Jebus” or Jebusalem. It was named after the Jebusites who lived there at the time Joshua and the Hebrews showed up to claim their promised land. The city was in the territory allotted to Benjamin. We learn in Judges 1:21 that the Benjaminites could not drive out the Jebusites. This was around 1400 BC.

David not only ruled from there but he also brought the Ark of the Covenant to Jerusalem where he established 24 hour daily worship to God. Jerusalem became David’s political and spiritual capital. His political rule and his spiritual worship would be known as the “Tabernacle of David.” We learn in 1 Kings 2:10 that David was buried in the City of David, which at that time was the southeastern ridge below the Temple Mount.

It didn’t seem right to King David that he lived in a nice palace while the Ark of the Covenant was in a tent. So before he died, he decided to build a temple for the Ark (2 Samuel 7; 1 Chronicles17). While it seemed like a good idea, the Lord said “no.” Because David was a warrior king, he had a lot of blood on his hands. The Lord did not want David’s blood-stained hands to build a Temple of worship (1 Chronicles 22:8).

But God did agree that David’s son, Solomon, could build the Temple (1 Chronicles 22). Even though David was not allowed to build the Temple, he did buy the threshing floor which would become the Temple Mount (2 Samuel 24:24). Furthermore, David did make most of the preparation for the Temple and give to Solomon the divine plans the Lord had given to him for building of the Temple.

Because David had defeated Israel’s enemies, Solomon ruled in times of peace. With peace and great wealth, Solomon was able to build the Temple in only seven years. He not only built the Temple, Solomon became the earth’s richest and greatest king. Under his reign, Jerusalem prospered and was one of the richest and greatest cities of its time. His rule was from about 970-930 BC.

Unfortunately, Solomon disobeyed God and married many foreign women who led Solomon into idolatry. He built temples to house the gods of his pagan wives and had to tax the people beyond what they could bear. When Solomon died, there was a civil war and Israel was split between the north and the south.  The northern kingdom was called Israel and consisted of ten tribes. Its capital was Samaria.  The northern kingdom had nineteen kings who were from nine different families. All these kings were evil and led the people away from their covenant God. The Lord finally judged them by allowing the Assyrians to conquer the northern kingdom in 721 BC and exile many of the Jews.

God finally judged them by allowing the Babylonians to attack Jerusalem in 606 BC. They completely destroyed Jerusalem in 586BC (2 Kings 25; 2 Chronicles 36). At this time, many of the prominent Jews were killed or taken to Babylon to serve the king. Jeremiah had prophesied that the Jews would be in captivity in Babylon for seventy years (Jeremiah 25). At the end of that captivity, God would judge Babylon and allow the Jews to return to the land.

In 536 BC, Persia defeated Babylon. The Persians established a great empire throughout the ancient Near East, including the land of Israel. It was a benevolent rule whose subjects enjoyed a reasonable amount of freedom and peace.

As a result of their tolerance, King Cyrus allowed the Jews to return to their homeland and rebuild the Temple (2 Chronicles 36:22-23; Ezra). Zerubbabel led the first group of 50,000 returning to the land. The people didn’t have the wealth and labor Solomon had so they became discouraged. The Lord sent the prophets Zechariah and Haggai to encourage the people to get busy building the Temple. It took about twenty years to complete the rebuilding of the Temple which was finished in 516 BC. Compared to Solomon’s Temple, this second Temple was rather plain. In 458 BC, Ezra led a second group of about 2,000. In 445 BC, King Xerxes allowed Nehemiah to return to rebuild Jerusalem itself.

Like other mighty empires, it seemed like the Persian Empire would last forever. However, it would soon succumb to Alexander the Great who was probably the greatest leader of all time. Alexander (356-323 BC) was only in his twenty’s when he defeated the mighty Persian army in 333 BC. He believed himself to be the son of Zeus. But his untimely death in 323 BC at the age of thirty-three proved him to be a mortal like all the rest of us. In his brief time, Alexander conquered much of the known world. It is said that when Alexander looked at his empire, he wept for there was nothing more to conquer.

Alexander did not normally destroy cities. Instead he “Hellenized” them. That means he established a Greek colony, Greek culture, Greek language, Greek philosophy, Greek gods and Greek practices in the cities he conquered. So while he did not physically destroy Jerusalem, he did something worse. He began to destroy the soul of Jerusalem by Hellenizing the city to be a Greek city. God was going to have to do something or Jerusalem would be lost as His hometown.

Dr. Richard Booker is a bestselling author and speaker and the Founder of Sounds of the Trumpet and the Institute for Hebraic-Christian Studies. He is a contributing editor for the Jerusalem Connection. To learn more of his work, see his web site at: www.rbooker.com.