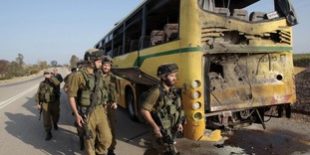 The condition of Daniel Viflic, the 16-year-old boy injured in the anti-tank missile attack on a school bus in the Negev on last week, has worsened, according to a statement released by Beersheba’s Soroka Medical Center on Tuesday. The boy’s condition was upgraded to extremely critical and life-threatening.

Viflic suffered severe head trauma and was artificially respirated while unconscious after an anti-tank missile fired from the Gaza Strip struck his school bus in the Negev last Thursday.

The missile, which was fired by Hamas terrorists, hit the bus moments after most of the children got off, while it was driving near Kibbutz Saad, about 2.5 k.m. from Gaza. Only two people were on the bus when it was hit – the driver, who was lightly injured in the leg, and Viflic, who was en route to visit his grandmother. The bus driver is a friend of the family.

Israel’s southern region has been barraged by more than 120 rockets and mortars in recent weeks. On Monday, a UN-brokered cease-fire went into effect, but the quiet remains shaky. IDF officials presume the truce will be short-lived and soldiers along the border remain on high alert.

“We succeeded in postponing a large-scale conflict with Hamas but that conflict is likely inevitable,” one senior officer said on Monday.