The Nazi inspired Jew hate of the Muslim brotherhood 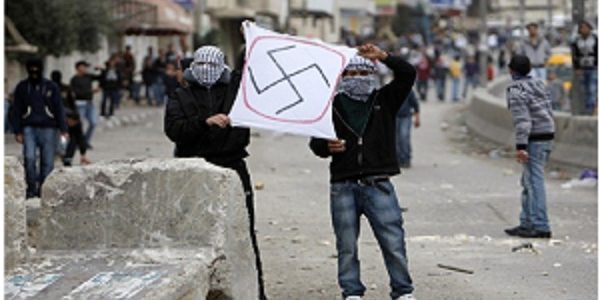 The revolutions in the Arab world that began earlier this year were noticeably low on anti-Jewish propaganda, leading many scholars to express the hope that the West had less to lose from the overthrow of men like Hosni Mubarak than previously thought. But if German scholar Matthias Küntzel is correct, one incident should adjust the expectations that the Muslim Brotherhood—who expect to perform well in Egypt’s upcoming parliamentary elections—can be a moderating force in Egyptian politics.

That one incident was the return and reception of Yusuf al-Qaradawi, the leading Brotherhood theologian who has praised Hitler and endorsed the Islamic acceptance of terrorism against Israel.

“It was no accident that Ahmadinejad, after the first time he his Holocaust denial—a kind of propaganda coup—the Muslim Brotherhood in Egypt were the first to applaud,” Küntzel, author of Jihad and Jew-Hatred: Islamism, Nazism and the Roots of 9/11, told me in an interview this week. “And also his promise to destroy Israel was of course very welcomed by the Egyptian Muslim Brotherhood. So I think that anti-Semitism is a central part of their ideology.”

But the Brotherhood is taking part in a democratic process, and they are seemingly pushing a reformist political agenda, which is leading to a debate over whether their history and ideology can be separated from their role in day-to-day politics. Küntzel warns against this. “On the one hand they are of course reformists as far as their political strategy is concerned,” Küntzel said. “So they want to participate in democratic elections. But that does not change their program. And we had the same in Germany. Adolf Hitler tried it with a putsch for the fist time in 1923, and later his Nazi party changed the approach and tried the parliamentary way… via the democratic way.”

The question we must ask, Küntzel said, is what the goals of the Muslim Brotherhood are, rather than how they attempt to gain power. “And as far as foreign policy is concerned, they want to destroy Israel, definitely. There is no differentiation between Hamas and the Muslim Brotherhood. … This is their program. You can see their program realized in the Gaza Strip today.”

Küntzel’s groundbreaking work exposing the strain of Nazi ideology present in the Islamist world and how it got there earned him the Anti-Defamation League’s Paul Ehrlich-Gunther K. Schwerin Human Rights Award in February—an honor usually given to politicians or other public servants.

“This was a big surprise for me,” Küntzel said, adding that the award was received with great appreciation not just from Küntzel himself, but from other researchers and writers in the field.

“Matthias Küntzel has a long and distinguished record in speaking out against anti-Semitism and warning his readers in his native Germany and elsewhere about the dangers posed by this age-old virus that has no known cure,” ADL Director Abe Foxman said at the award ceremony. “His work has been sorely under-appreciated in this country. With this recognition, we hope to acknowledge his ongoing efforts and also let the American public know of the implications of this disturbing trend.”

I asked Küntzel how important individual players, such as Hajj Amin al-Husseini, who was the mufti of Jerusalem during WWII and struck up an alliance with the Nazis, were to the successful transmission of Nazi anti-Semitism to the Muslim world.

Very important, was the answer—especially in light of what was essentially a partnership in Jew-hatred between the two.

“He made the suggestion to the Nazis in the thirties that he they should use this type of radio propaganda against the Jews, so it went both ways,” he said. “At the time, only the Italian fascists used the tool.”

On the other hand, he noted, al-Husseini wasn’t well known or popular in Iran during that time, so there was a limit to how far the mufti could spread the propaganda. In the case of Iran, the Nazis used a popular radio host who could spread their ideology in a way that was localized to Iranian issues and Persian culture.

“The most important thing is the concept on the whole that you sell anti-Semitism in a way which fits to the people’s customs,” Küntzel said. This meant recognizing that the Arab-Israeli conflict was a much more salient issue among Arabs than in Iran. “The Nazis were smart enough to make this differentiation.”

Küntzel is very disappointed with the response by Western leaders to the naked anti-Semitism and the presence of Nazi ideology in public statements by influential clerics like Qaradawi, such as when he praised the Holocaust.

“If the pope would do something like this, or some of those surrounding the pope in Rome, there would be an outcry throughout the world,” Küntzel said. “But if this kind of very important Muslim speaker does the same, there is silence. And the reason is that people underestimate and don’t know much about the roots of this anti-Semitism. The traditional way to analyze this is to say, well this is the result of the Middle East conflict so if Israel and Zionism would behave more correctly and we can finish with the conflict, then we can finish with anti-Semitism as well.”

This is what Küntzel calls the filter that exists between actual events and their interpretation. Anti-Semitism, or at least a certain strain of it, was imported into the Middle East, and is now being exported from it.

“We are just at the beginning of a change in the analysis of the roots of the anti-Semitism in the Middle East,” Küntzel said. “And I consider this a very important task also to educate Western governments that this is not just the outcome of a conflict caused by Jews who immigrated to Palestine, but that this is something very similar to Nazi anti-Semitism and has to be taken as seriously as the Nazi anti-Semitism was taken.”

Küntzel said he is trying to dispel the false assumption that anti-Semitism has anything to do with Jewish behavior—it doesn’t. Anti-Semitism stems from the mind of the anti-Semite, not with anything the Jews do. So to couch it in terms of a Jewish issue, he said, is completely backwards. It is the province of non-Jews, and therefore must be dealt with by non-Jews as well, not ignored. The Jews, he said, can’t do anything about anti-Semitism if it is not dealt with by society at large.

And it’s the job of researchers and educators not the fall into this trap, and to be willing to reassess and reevaluate preconceived notions such as this, when they are so clearly an obstacle to an accurate understanding of the issue.

“This is an ongoing struggle in the academic world,” Küntzel said.

Seth Mandel is a writer specializing in Middle Eastern politics and a Shillman Journalism Fellow at the Horowitz Freedom Center.