Goldstone: Claims of Israel's Gaza war crimes should be reconsidered 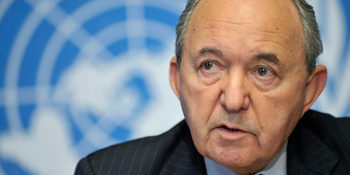 Former jurist Richard Goldstone said that if Israel had cooperated with his United Nations fact-finding commission into the events of Operation Cast Lead, the charges mounted against Israel in the Goldstone Report, including those of alleged war crimes and the intentional targeting of civilians, would have been different.

Writing in a Washington Post column published on Friday, Goldstone noted Israeli efforts to investigate wrongdoings by soldiers and commanders during the Gaza war, saying that war crime allegations against Israel would have been influenced by the evidence provided by such probes.

“We know a lot more today about what happened in the Gaza war of 2008-09 than we did when I chaired the fact-finding mission appointed by the UN Human Rights Council that produced what has come to be known as the Goldstone Report,” Goldstone wrote, adding: “If I had known then what I know now, the Goldstone Report would have been a different document.”

The former South African jurist said that while “Israeli evidence that has emerged since publication of our report doesn’t negate the tragic loss of civilian life, I regret that our fact-finding mission did not have such evidence explaining the circumstances in which we said civilians in Gaza were targeted, because it probably would have influenced our findings about intentionality and war crimes.”

While Israel has shown to probe itself “to a significant degree” over Gaza war actions, Goldstone wrote, Hamas, who has been in control of the coastal enclave since 2007, “has done nothing.”

“Something that has not been recognized often enough is the fact that our report marked the first time illegal acts of terrorism from Hamas were being investigated and condemned by the United Nations,” Goldstone added, saying that his report “found evidence of potential war crimes and ‘possibly crimes against humanity’ by both Israel and Hamas. That the crimes allegedly committed by Hamas were intentional goes without saying — its rockets were purposefully and indiscriminately aimed at civilian targets.”

“That comparatively few Israelis have been killed by the unlawful rocket and mortar attacks from Gaza in no way minimizes the criminality. The UN Human Rights Council should condemn these heinous acts in the strongest terms,” Goldstone said.

Goldstone also urged the UN’s rights body to condemn a recent stabbing attack at the West Bank settlement of Itamar, saying that “the Human Rights Council should condemn the inexcusable and cold-blooded recent slaughter of a young Israeli couple and three of their small children in their beds.”

“Only if all parties to armed conflicts are held to these standards will we be able to protect civilians who, through no choice of their own, are caught up in war,” he added.