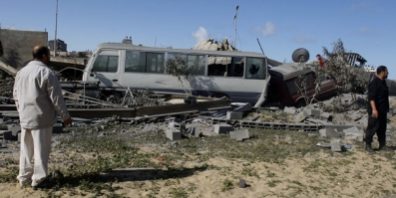 Hamas stated Wednesday evening that it wants to “restore calm” and indicated it is backing off from escalation in attacks as Israel makes it clear it will not tolerate terror.

Gaza-based terrorists fired 15 mortar shells at western Negev farming areas during the day, causing property damage but no injuries. The IDF has not yet retaliated for the latest barrage.

The de facto Hamas government in Gaza stated, “We stress that our constant position in the government is to protect stability and to work in order to restore the conditions on ground that used to be dominant in previous weeks.”

The statement was milder than Hamas position two days ago, when it demanded that Israel declare a ceasefire in return for restoration of quiet. However, Islamic Jihad terrorists threatened to continue the escalation of attacks, which have struck Be’er Sheva and south of Ashdod, increasing the chance of another all-out retaliation similar to the Operation Cast Lead counterterrorist campaign two years ago.

Amos Gilad, senior Defense Ministry adviser, said Wednesday night that Hamas will be making a “dramatic mistake” if it does not halt the rocket and mortar attacks on Israeli civilians and soldiers.

He also said that Hamas is inspired and encouraged by the recent uprisings in the Arab world.

Gilad said, “it is the responsibility of any government to protect civilians,” and that Israel will continue to do so.

Prime Minister Binyamin Netanyahu, prior to leaving Wednesday night for a meeting with top officials in Moscow, stated, “We have set a clear policy on security, the essence of which is a vigorous response to any attempt to harm Israeli citizens, and systematic and assertive preventive measures against terrorism.”

He said that elements that have tried to violate the relative quiet since the end of Cast Lead. “They are trying to test our resolve and the fortitude of our people,” the Prime Minister continued. “They will learn that the government, the IDF and the Israeli public have an iron will to defend the state and its citizens.”

Concerning his trip to Russia, he said he “will discuss with them a series of bilateral and regional issues, as well as the search for a peace process with security and issues that are very important for Israel’s security.”