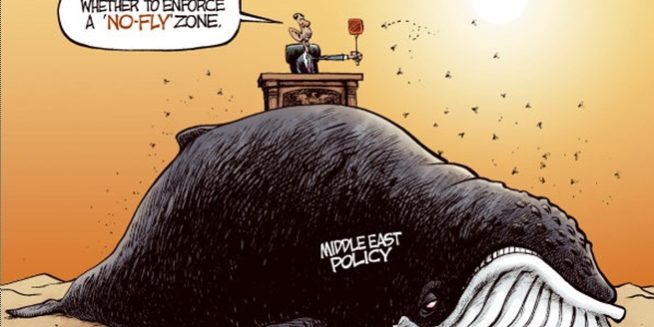 The US’s new war against Libyan dictator Muammar Gaddafi is the latest sign of its steady regional decline. In media interviews over the weekend, US military chief Adm. Michael Mullen was hard-pressed to explain either the goal of the military strikes in Libya or their strategic rationale.

Mullen’s difficulty explaining the purpose of this new war was indicative of the increasing irrationality of US foreign policy.

Traditionally, states have crafted their foreign policy to expand their wealth and bolster their national security. In this context, US foreign policy in the Middle East has traditionally been directed towards advancing three goals: Guaranteeing the free flow of inexpensive petroleum products from the Middle East to global market; strengthening regimes and governments that are in a position to advance this core US goal at the expense of US enemies; and fighting against regional forces like the pan-Arabists and the jihadists that advance a political program inherently hostile to US power.

Other competing interests have periodically interfered with US Middle East policy. And these have to greater or lesser degrees impaired the US’s ability to formulate and implement rational policies in the region.

These competing interests have included the desire to placate somewhat friendly Arab regimes that are stressed by or dominated by anti-US forces; a desire to foster good relations with Europe; and a desire to win the support of the US media.

Under the Obama administration, these competing interests have not merely influenced US policy in the Middle East. They have dominated it. Core American interests have been thrown to the wayside.

BEFORE CONSIDERING the deleterious impact this descent into strategic dementia has had on US interests, it is necessary to consider the motivations of the various sides to the foreign policy debate in the US today.

All of the sides have contributed to the fact that US Middle East policy is now firmly submerged in a morass of strategic insanity.

The first side in the debate is the anti-imperialist camp, represented by President Barack Obama himself. Since taking office, Obama has made clear that he views the US as an imperialist power on the world stage. As a result, the overarching goal of Obama’s foreign policy has been to end US global hegemony.

Obama looks to the UN as a vehicle for tethering the US superpower. He views US allies in the Middle East and around the world with suspicion because he feels that as US allies, they are complicit with US imperialism.

Given his view, Obama’s instincts dictate that he do nothing to advance the US’s core interests in the Middle East. Consider his policies towards Iran. The Iranian regime threatens all of the US’s core regional interests.

And yet, Obama has refused to lift a finger against the mullahs.

Operating under the assumption that US enemies are right to hate America due to its global hegemony, when the mullahs stole the 2009 presidential elections for Mahmoud Ahmadinejad and then violently repressed the pro-Western opposition Green Movement, Obama sided with the mullahs.

Aside from its imperative to lash out at Israel, Obama’s ideological predisposition would permit him to happily sit on the sidelines and do nothing against US foe or friend alike. But given Obama’s basic suspicion of US allies, to the extent he has bowed to pressure to take action in the Middle East, he has always done so to the detriment of US allies.

When the Muslim Brotherhood-backed opposition protests began in late January, Obama was perfectly happy to do nothing despite the US’s overwhelming national interest in preserving Mubarak in power. But when faced with domestic pressure to intervene against Mubarak, he did so with a vengeance.

Not only did Obama force Mubarak to resign. He prevented Mubarak from resigning in September and so ensured that the Brotherhood would dominate the transition period to the new regime.

Obama’s most outspoken opponents in the US foreign policy debate are the neoconservatives.

Like Obama, the neoconservatives are not motivated to act by concern for the US’s core regional interests. What motivates them is their belief that the US must always oppose tyranny.

In some cases, like Iran and Iraq, the neoconservatives’ view was in consonance with US strategic interests and so their policy recommendation of siding with regime opponents against the regimes was rational.

If there is noticeable opposition to tyrants, then the US must support that opposition.

This view is what informed the neoconservative bid to oust Mubarak last month and Gaddafi this month.

To an even greater degree than in Egypt, the debate was settled by the third US foreign policy camp — the opportunists. Led today by Clinton, the opportunist camp supports whoever they believe is going to make them most popular with the media and Europe.

In the case of Libya, the opportunist interests dictated military intervention against Gaddafi. Europe opposes Gaddafi because the French and the British bet early on that his opponents were winning. France recognized the opposition as the legitimate government two weeks ago.

Once Gaddafi’s counteroffensive began, France and Britain realized they would be harmed politically and economically if Gaddafi maintained power so they began calling for military strikes to overthrow him.

As for the media, they were quick to romanticize the amorphous “opposition” as freedom fighters.

Seeing the direction of the wind, Clinton jumped on the European-media bandwagon and forced Obama to agree to a military operation whose goal no one can define.

WHAT THE US foreign policy fights regarding Egypt and Libya indicate is that currently, a discussion about how events impact core US regional interests is completely absent from the discussion. Consequently, it should surprise no one that none of the policies the US is implementing in the region advance those core interests in any way. Indeed, they are being severely damaged.

Under Mubarak, Egypt advanced US interests in two main ways. First, by waging war against the Muslim Brotherhood and opposing the rise of Iranian power in the region, Mubarak weakened the regional forces that most threatened US interests. Second, by managing the Suez Canal in conformance with international maritime law, Egypt facilitated the smooth transport of petroleum products to global markets and prevented Iran from operating in the Mediterranean Sea.

Since Mubarak was ousted, the ruling military junta has taken actions that signal that Egypt is no longer interested in behaving in a manner that advances US interests.

Domestically, the junta has embarked on a course that all but guarantees the Muslim Brotherhood’s rise to power in the fall.

Second, it set the date for parliamentary elections for September. Only the Brotherhood, and remnants of Mubarak’s National Democratic Party will be ready to stand for election so soon. The liberals have no chance of mounting a coherent campaign in just six months.

In anticipation of the Brotherhood’s rise to power, the military has begun realigning Egypt into the Iranian camp. This realignment is seen most openly in Egypt’s new support for Hamas. Mubarak opposed Hamas because it is part of the Brotherhood.

The junta supports it for the same reason. Newly appointed Foreign Minister Nabil el-Araby has already called for the opening of Egypt’s border with Hamas ruled Gaza.

There can be little doubt Hamas’s massive rocket barrage against Israel on Saturday was the product of its sense that Egypt is now on its side.

As for the Suez Canal, the junta’s behavior so far is a cause for alarm. Binding UN Security Council Resolution 1747 from 2007 bars Iran from shipping arms. Yet last month the junta thumbed its nose at international law and permitted two Iranian naval ships to traverse the canal without being inspected.

According to military sources, one of the ships carried advanced armaments. These were illicitly transferred to the German merchant ship Victoria at Syria’s Latakia port. Last week, IDF naval commandos interdicted the Victoria with its Iranian weaponry en route to Gaza via Alexandria.

Add to that Egypt’s decision to abrogate its contractual obligation to supply Israel with natural gas and we see that the junta is willing to suspend its commitment to international law in order to realign its foreign policy with Iran.

ON EVERY level, a post-Mubarak Egypt threatens the US core interests that Mubarak advanced.

Then there is Libya. One of the most astounding aspects of the US debate on Libya in recent weeks has been the scant attention paid to the nature of the rebels.

The rebels are reportedly represented by the so-called National Transitional Council led by several of Gaddafi’s former ministers.

But while these men — who are themselves competing for the leadership mantle — are the face of the NTC, it is unclear who stands behind them. Only nine of the NTC’s 31 members have been identified.

Unfortunately, available data suggest that the rebels championed as freedom fighters by the neoconservatives, the opportunists, the Europeans and the Western media alike are not exactly liberal democrats. Indeed, the data indicate that Gaddafi’s opponents are more aligned with al-Qaida than with the US.

In 2007 Al-Libi merged his forces into al- Qaida. On March 18, while denouncing the US, France and Britain, Al-Libi called on his forces to overthrow Gaddafi.

None of this proves that the US is now assisting an al-Qaida takeover of Libya. But it certainly indicates that the forces being assisted by the US in Libya are probably no more sympathetic to US interests than Gaddafi is. At a minimum, the data indicate the US has no compelling national interest in helping the rebels to overthrow Gaddafi.

The significance of the US’s descent into strategic irrationality bodes ill not just for US allies, but for America itself. Until the US foreign policy community is again able to recognize and work to advance the US’s core interests in the Middle East, America’s policies will threaten both its allies and itself.