It Takes Many Villages 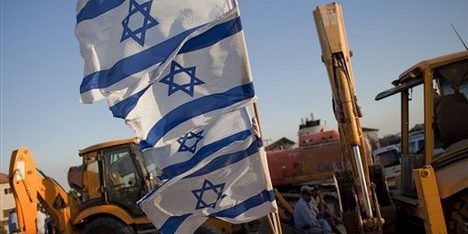 Actions speak louder than words. Prime Minister Binyamin Netanyahu wants to hear the world, or at least the allegedly civilized Western world, condemn in words the barbaric slaughter of a Jewish family by the Arabs who call themselves Palestinians. He needn’t have bothered as Caroline Glick suggested in her article, Our World: Three Jewish Children.

The world only wants one thing and that is that the pesky Jews first leave Judea and Samaria (which the nations all call by its Jordanian Arab name, the West Bank), the Golan Heights, and then leave what’s left of the State of Israel. Only then will there be nirvana, peace in our time as the world enters a new golden age of harmony and brotherly love; not to forget lashings of kumbaya. Yes, and cows have wings!

No. The same world that lectures and berates Israel, especially Europe, is ironically proceeding at an ever rapid pace towards subjugation at the hands of resurgent and triumphant Islam.

Unless very soon, very, very soon, the Brits, the Europeans, and eventually the Americans, come to their senses and physically remove the Muslim threat, they will become dhimmis in their own lands and they will have no one to blame but themselves – and the Israel-Palestinian conflict will have had absolutely nothing to do with it; So much for “peace in our time.” Instead a 7th century pestilence will arrive.

The same threat that already is plaguing the West, laps at the very gates of the Jewish villages (not settlements) that grace the hills and valleys of Judea and Samaria. The pestilence came to the Jewish village of Itamar in the form of Arab, Muslim beasts who slaughtered with long knives a young Rabbi, his wife and three children, including a baby.

They slit the throat of a baby girl and for that, the Arabs who call themselves Palestinians, gloated and handed out candies to celebrate the deed. Oh, and they were joined by the creature from the Black Lagoon, otherwise known as the Islamic Republic of Iran’s, Mahmoud Ahmadinejad. There truly is great evil growing in the world; an Islamic and Marxist unholy alliance.

The horror of this bestial Arab act riveted the Jewish state but it left most of the world indifferent. Hence the sad pointlessness of Netanyahu’s demand of the world that it utters strong words condemning the atrocity.

In January, 2005, I wrote a chapter in the first volume of my book, Politicide: The attempted murder of the Jewish state. It was titled, “The ultimate answer to Arab terror.”

I had hoped that by now my suggestion in that chapter would have borne fruit but it was not to be. Let me suggest, again, what I had posited those six long years ago – a period in which hundreds more Jews have perished in Judea and Samaria and some 10,000 Jewish souls in Gaza were violently deported from their homes and farms by deranged Israeli leaders who believed that their actions would bring, “peace in our time.” Oh, how the angels in heaven must have wept at such foolishness.

I had pointed out that the Greek playwright of the 5th century BCE, Euripides, once penned the words “Those whom the gods wish to destroy, first they make mad.” I then went on to add that, “today, some 2,500 years later, an Israeli government led by a once great military hero is responding to relentless acts of Arab terror and aggression in a way that is incoherent, indecisive, and frankly suicidal.”

I continued. “Many may wonder, are the words of Euripides coming true for the leaders of the reconstituted Jewish state. Is the Prime Minister acting rationally in his implacable desire to drive his fellow Jews out of their homes and lands in Gaza and in northern Samaria?”

I asked two rhetorical questions: “Does the government believe that seeing Israeli police and soldiers forcing out Jews and handing their land to Arabs does not whet the appetite of the Palestinian Arabs to pressure the Jewish state with yet more acts of terror?

“Is it not yet plain to even the far Left within Israel that the Arabs, who call themselves Palestinians, want not just the so-called disputed territories, but all of Israel down to the last city block in Tel Aviv?”

Well six years have passed and today Ehud Barak, the Defense Minister continues to torment the Jewish pioneers and residents in Judea and Samaria by tearing down Jewish homes while turning a blind eye to the hundreds of illegal Arab villas that dot the landscape of Judea and Samaria. His reasoning, being a man of the Left, is as always to appease the Arabs and the demands of a hostile world from Obama to the Quartet, to the EU, and to the UN. He, Ehud Barak, must go.

I have a good friend who always ends his letters with these words under his signature: Remember Shalhevet Pass.

You too remember, I hope, this Jewish infant who was shot to death by an Arab sniper while she was being held in her father’s arms in Hebron. And now we witness other Jewish infants; the child, the toddler and the baby girl, done to death by Muslim Arabs who call themselves Palestinians, while their innocent victims slept in their Samarian home of Itamar on the Sabbath.

Remember too in 1979, Smadar Kaiser, her husband Danny, and their two small daughters, four-year-old Einat and two-year-old Yael, who were awakened in their northern Israel apartment at midnight by gunfire and exploding grenades.

To quote Andrew MacCarthy in his National Review Online article, Why they celebrate murdering children, “ Muslim terrorists broke into their home and while Smadar hid with Yael in the dark, suffocating crawl space, the terrorists grabbed Danny and Einat and marched them down to a nearby beach. There, one of them shot Danny in front of his daughter so that his death would be the last sight she’d ever see.

“Then the ruthless ringleader, Lebanese-born Samir Kuntar, used the butt of his rifle to bash in the four-year-olds skull against a rock. Hours later, upon finally being “rescued” from the crawl space, two-year-old Yael, too, was dead – accidentally smothered by her petrified mother in the effort to keep her quiet as the jihadists searched for more Jews to kill.”

Samir Kuntar was captured but later released by Israel in return for the bodies of two Israeli soldiers murdered in Lebanon. Kuntar went on to receive a hero’s welcome in Lebanon.

Six years then of futility in the face of Arab knives, bullets, bombs, missiles and venomous Arab diplomatic warfare has availed Israel naught. The answer to aggression from the Arabs who call themselves Palestinians is to act in ways that make it so painful to them that they will come to realize that their violence and blood-lust becomes horribly counter-productive.

By that, I don’t mean inflicting upon them higher and higher body counts. That does not faze them at all, for they welcome death as shaheeds (martyrs) and relish the 72 virgins allegedly awaiting them in paradise. Military responses to Arab violence are effective, but only up to a point.

No there is a far, far more devastating response that Israel must employ regardless of the howls of rage that will undoubtedly emanate from the Obama administration and the ever hypocritical international corridors of power. It is a simple and purely Zionistic response. It is pure Zionism.

A principled Israeli government, perhaps Binyamin Netanyahu’s, (though I will not hold my breath) must now make an irrevocable decision and stand firm on it. That decision must be to finally respond to Palestinian Arab crimes against humanity by restoring, rebuilding and creating Jewish villages throughout Judea, Samaria and the Golan, every time Arabs, be they Hamas, Fatah, Hezbollah, Islamic Jihad, ad nauseum, murder or harm any Jewish man, woman or child. And each new village should be named in eternal memory of that Jewish victim of Arab hate and evil.

Where to build is simple. According to Doc’s Talk blog spot, almost all Arab towns and villages in Judea and Samaria have retained their original biblical Jewish names, albeit in Arabic translation, thus reaffirming their Jewish roots. New Jewish villages can and should be built in or near these Arab settlements.

And when the world rages that Jews are “building new settlements,” the Israeli, Jewish and Zionist answer must be made by articulate and attractive Israeli spokespersons who understand the cultures of the nations to whom they are speaking. These ambassadors of Israel must make an empirical and undeniable case for why ancient, biblical and ancestral Jewish villages are being restored from occupation and usurpation by non-native people of the Land.

The vast majority of today’s Arabs who reside between the Jordan River and the Mediterranean, have their relatively recent origin in the massive 19th-20th century illegal immigration into what was British Mandatory Palestine. They came from Egypt, Syria, Lebanon and other Moslem countries. They came from their impoverished Arab backwaters because they saw the Jewish restoration of the long neglected Land and the employment opportunities created by Jewish pioneering and agricultural effort. It is, after all, the Jews who are the native and aboriginal people who so dearly love their ancestral and biblical homeland and Judea and Samaria comprise its very heart.

The world must be told that, if for example, the Palestinian Arabs set out to murder Israelis, permanent Israeli villages will be created and recreated in Judea and Samaria – each one named after a Jewish victim. This must be official and non-negotiable Israeli policy. Only then will Mahmoud Abbas and his cronies in the so-called Palestinian Authority see where their hate and aggression is leading them.

Hillary Clinton once spoke about “it takes a village.” Israel’s response to continuing murderous rampages and atrocities by the Arabs who call themselves Palestinians will thus result in many villages, which will grow and grace the hills and valleys of Judea and Samaria, while immortalizing the names of the Jewish souls lost to Muslim hate.

If Israel’s leaders reject this Zionist response to Arab terror then the words of Euripides will, alas, come true. Will Israel’s government finally hear, or will another six years and yet more precious lives be lost?