Why they celebrate murdering children? 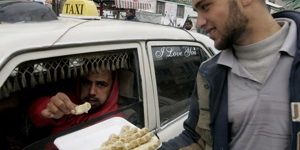 Do you think the State Department noticed that no one in Arizona, Mexico, or even Mars took to the streets to celebrate the shooting of Gabrielle Giffords? No one seemed to think it was a “natural” act — the Islamic term du jour to rationalize the throat-slitting massacre of a sleeping Jewish family: 36-year-old Udi Fogel, his 35-year-old wife, Ruth, and, yes, their three children: 11-year-old Yoav, 4-year-old Elad, and Hadas, their 3-month-old baby.

Arid Uka had opened fire in a sneak attack at the Frankfurt airport, killing two and seriously wounding two others while screaming the obligatory “Allahu Akbar!” Wasn’t that a terrorist attack? Gee whiz, you know, the State Department’s chief spokesman just couldn’t say. After all, in P. J. Crowley’s mindless yet seemingly inevitable comparison, “was the shooting of congresswoman Gabrielle Giffords a terrorist attack?”

Muslims are frequently found carrying out the Koranic directive to “strike terror into the hearts of the unbelievers.” Actually, make that the Koranic theme, so often is it reiterated in the scriptures devout Muslims take to be the verbatim commands of Allah. (See, e.g., Suras 3:151, 8:12–13, 8:60, 9:5, 33:25–27, 59:2–4, 59:13.) And that is beside the hadith, scriptures in which Mohammed, taken to be the perfect Muslim role model, boasts, “I have been made victorious with terror.” (Bukhari 4.52.220 — just scroll down from here, through the glories promised to Muslims who wage jihad against the infidels.)

Muslims, in fact, are more often exhorted by their scriptures to brutalize non-Muslims than Christians are urged by the gospels to love their enemies and turn the other cheek. Yet, though we assume the latter are meant to take the message to heart, we are somehow sure Islam doesn’t really mean what it says — that when Muslims strike terror into the hearts of the unbelievers, it must be Israel’s fault, or America’s, or something, anything, other than Islam, the only common denominator in these attacks.

For U.S. officials, it is a bridge too far to acknowledge the welter of doctrinal grounding that supports these atrocities. Sort the deranged likes of Jared Loughner from the ideologically driven adherents of Islam? Observe the chasm between mentally disturbed killers and mentally conditioned killers? No way.

So here’s a suggestion: Maybe our paralyzed policy makers could see their way clear to noticing how Muslims respond to Muslim jihadists: Like the Muslims across the globe who cheered the 9/11 attacks; like those who littered Arid Uka’s Facebook with such commentary as, “Way to go, you old killer!” and “That is part of this beautiful religion. One is allowed to fight the unbelievers when attacked.”

Maybe then the American government could be as revolted as the American people are by the celebrations in Gaza over last Friday’s murder of the Fogel family (or nearly the whole family — three of the children managed to survive). Gaza, of course, is controlled by Hamas, the Palestinian wing of the Muslim Brotherhood. You may know the Brothers as the “largely secular” “moderates” the Obama administration and the European Union see as part of the solution to the strife currently rippling through one Islamic country after another — a studiously underreported staple of which is Jew-hatred, with mob promises to conquer Jerusalem and depictions of dictators like Mubarak and Qaddafi as Israeli spies.

As the Israeli press reported, jubilant Muslims crowded Gaza’s streets, handing out candy and sweets in the wake of the murders. Jennifer Rubin notes that the outpouring of joy over the slitting of an infant’s throat was, according to one resident, “a natural response to the harm settlers inflict” on Palestinians.

It is a natural response, if you are a monster. If you have been reared in a culture that worships suicide bombers, that dehumanizes Jews as the children of monkeys and pigs, and that insists Israel is not merely the enemy but does not have a right to exist. And these positions, it bears emphasizing, do not represent some fringe Islam of al-Qaeda terrorists who have purportedly hijacked an otherwise peaceful religion. This is mainstream Islam, the sorts of things you would hear in a classroom at al-Azhar University or a television show on al-Jazeera — the place where, according to Secretary of State Hillary Clinton, people turn for “real news,” the place where Muslim Brotherhood guru Yusuf Qaradawi lionizes suicide bombers in his popular weekly program, Sharia and Life.

“The prophet, prayer and peace be upon him, said, ‘The time will not come until Muslims will fight the Jews and kill them; until the Jews hide behind rocks and trees, which will cry: Oh, Muslim! There is a Jew hiding behind me, come and kill him!” That’s not something Osama bin Laden made up. It is right there in the hadith, the authoritative accounts of Mohammed’s words and deeds. As Robert Spencer has demonstrated, variations of this end of times scenario run through the hadith collections of Sahih Muslim (Book 41, nos. 6980-86) and Bukhari (4.52.176 & 177, and 4.56.791.) That is why the story is repeated in Article 7 of the Hamas charter, the document in which the Muslim Brotherhood explains that annihilating Israel is a religious duty. That is why the story is a favorite of Sheikh Qaradawi’s.

In 1979, Smadar Kaiser, her husband Danny, and their two small daughters, four-year-old Einat and two-year-old Yael, were awakened in their northern Israel apartment at midnight by gunfire and exploding grenades. A team of Muslim terrorists was in the neighborhood. While a trembling Smadar hid with Yael in the dark, suffocating crawl space, the terrorists grabbed Danny and Einat and marched them down to a nearby beach. There, one of them shot Danny in front of his daughter so that his death would be the last sight she’d ever see. Then the ruthless ringleader, Lebanese-born Samir Kuntar, used the butt of his rifle to bash in the four-year-old’s skull against a rock. Hours later, upon finally being “rescued” from the crawl space, two-year-old Yael, too, was dead – accidentally smothered by her petrified mother in the effort to keep her quiet as the jihadists searched for more Jews to kill.

The Israelis captured Kuntar, who was sentenced to life in prison. Nevertheless, Palestinian leaders and masses agitated for his release for decades, praising this vicious cretin as a “brave leader” and “model warrior.” In 2007, the Israeli government finally capitulated, exchanging Kuntar and other imprisoned terrorists for the remains of two deceased Israeli soldiers. Kuntar was welcomed to the West Bank as a conquering hero. The Palestinian Authority granted him and another released terrorist honorary citizenship “as an act of dedication to their struggle and their heroic suffering in the occupation’s prisons.” It was business as usual: In the Palestinian territories and elsewhere in the Muslim world, it is a commonplace to name streets after jihadist killers. Mohammed taught that there was no higher form of service to Allah.

Rep. Peter King is to be applauded for forcing Congress to notice the phenomenon we so gingerly call Muslim “radicalization.” The question that really begs for hearings, though, is why we continue pretending not to know what causes it.

— Andrew C. McCarthy, a senior fellow at the National Review Institute, is the author, most recently, of The Grand Jihad: How Islam and the Left Sabotage America.