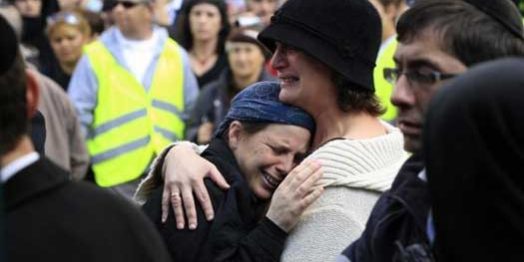 Ruth Fogel was in the bathroom when the Palestinian terrorists pounced on her husband Udi and their three-month-old daughter Hadas, slitting their throats as they lay in bed on Friday night in their home in Itamar.

The terrorists stabbed Ruth to death as she came out of the bathroom. With both parents and the newborn dead, they moved on to the other children, going into a bedroom where Ruth and Udi’s sons Yoav (11) and Elad (four) were sleeping. They stabbed them through their hearts and slit their throats.

The murderers apparently missed another bedroom where the Fogels’ other sons, eight-year-old Ro’i and two-year-old Yishai were asleep because they left them alive. The boys were found by their big sister, 12-year-old Tamar, when she returned home from a friend’s house two hours after her family was massacred.

Tamar found Yishai standing over his parents’ bodies screaming for them to wake up.

In his eulogy at the family’s funeral on Sunday, former chief rabbi Yisrael Meir Lau told Tamar that her job from now on is to be her surviving brothers’ mommy.

In a rare move, the Prime Minister’s Office released photos of the Fogel family’s blood-drenched corpses.

They are shown as they were found by security forces.

There was Hadas, dead on her parents’ bed, next to her dead father Udi.

There was Elad, lying on a small throw rug wearing socks. His little hands were clenched into fists. What was a four-year-old to do against two grown men with knives? He clenched his fists. So did his big brother.

Maybe the Prime Minister’s Office thought the pictures would shock the world. Maybe Binyamin Netanyahu thought the massacre of three little children would move someone to rethink their hatred of Israel.

That was the theme of his address to the nation Saturday night.

Netanyahu directed most of his words to the hostile world. He spoke to the leaders who rush to condemn Israel at the UN Security Council every time we assert our right to this land by permitting Jews to build homes. He demanded that they condemn the murder of Jewish children with the same enthusiasm and speed.

He shouldn’t have bothered.

The government released the photos on Saturday night. Within hours, the social activism website My Israel posted a short video of the photographs on YouTube along with the names and ages of the victims.

What was Netanyahu thinking? Didn’t he get the memo that photos of murdered Jewish children are unacceptable? If they’re published, someone might start thinking about the nature of Palestinian society.

Someone might consider the fact that in the Palestinian Authority, anti-Jewish propaganda is so ubiquitous and so murderous that killing the Fogel babies was an act of heroism. The baby killers knew that by murdering Udi, Ruth, Hadas, Yoav and Elad they would enter the pantheon of Palestinian heroes. They can expect to have a sports stadium or school in Ramallah or Hebron built for them by the Palestinian Authority and underwritten by American or European taxpayers.

And indeed, the murder of the Fogel children and their parents was greeted with jubilation in Gaza.

Carnivals were held in the streets as Hamas members handed out sweets.

Obviously YouTube managers are not interested in being held responsible for someone noticing that genocidal Jew hatred defines Palestinian society – and the Arab world as a whole. But they really have no reason to be concerned. Even if they had allowed the video to be posted for more than an hour, it wouldn’t have made a difference.

The enlightened peoples of Europe, and growing numbers of Americans, have no interest in hearing or seeing anything that depicts Jews as good people, or even just as regular people. It is not that the cultured, intellectual A-listers in Europe and America share the Palestinians’ genocidal hatred of the Jewish people.

The powerful newspaper editors, television commentators, playwrights, fashion designers, filmmakers and professors don’t spend time thinking about how to prepare the next slaughter. They don’t teach their children from the time they are Hadas and Elad Fogel’s ages that they should strive to become mass murderers. They would never dream of doing these things. They know there is a division of labor in contemporary anti-Semitism.

The job of the intellectual luminaries in Western high society today is to hate Jews the old-fashioned way, the way their greatgrandparents hated Jews back in the days of the early 20th century before that villain Adolf Hitler gave Jewhating a bad name.

Much has been made of the confluence of anti-Semitic bile pouring out of the chattering classes. From Mel Gibson to Julian Assange to Charlie Sheen to John Galliano, it seems like a day doesn’t go by without some new celebrity exposing himself as a Jew hater.

It isn’t that the beautiful people and their followers suddenly decided that Jews are not their cup of tea (or rail of cocaine). It’s just that we have reached the point where people no longer feel embarrassed to parade negative feelings towards Jews.

A DECADE ago, the revelation that French ambassador to Britain Daniel Bernard referred to Israel as “that shi**y little country,” was shocking. Now it is standard fare. Everyone who is anyone will compare Israel to Nazi Germany without even realizing this is nothing but Holocaust denial.

The post-Holocaust dam reining in anti-Semitism burst in 2002. As Jewish children and parents like the Fogels were being murdered in their beds, on the streets, in discotheques, cafés and supermarkets throughout Israel, fashionable anti-Semites rejoiced at the opportunity to hate Jews in public again.

The collective Jew, Israel was accused of everything from genocide to infanticide to just plain nastiness.

Israel’s leaders were caricatured as Fagin, Shylock, Pontius Pilate and Hitler on the front pages of newspapers throughout Europe. IDF soldiers were portrayed as Nazis, and Israeli families were dehumanized.

No longer civilians with an inherent right to live, in universities throughout the US and Europe, Israeli innocents were castigated as “extremist-Zionists” or “settlers” who basically deserved to be killed.

The script accuses the entire population of Israel of mass murders which were never committed.

For her efforts, Churchill became an international celebrity. The Royal Court Theater produced her anti- Jewish agitprop. The Guardian featured it on its home page. When Jewish groups demanded that The Guardian remove the blood libel from its website, the paper refused. Instead, it left the anti-Semitic propaganda on its homepage, but in a gesture of openmindedness, hosted a debate about whether or not Seven Jewish Children is anti-Semitic.

From London, Seven Jewish Children went on tour in Europe and the US. In a bid to show how tolerant of dissent they are, Jewish communities in America hosted showings of the play, which portrays Jewish parents as monsters who train their children to become mass murderers.

Seven Jewish Children’s success was repeated by the Turkish anti-Semitic action film Valley of the Wolves- Palestine, which premiered on January 28 – International Holocaust Memorial Day. The hero of that film is a Turkish James Bond character who comes to Israel to avenge his brothers, who were killed by IDF forces on the Turkish-Hamas terror ship Mavi Marmara last May.

No doubt owing to the success of Seven Jewish Children and Valley of the Wolves-Palestine and other such initiatives, anti-Semitic art and entertainment is a growth sector in Europe.

Last month Britain struck again. Channel 4 produced a new piece of anti-Semitic bile – a four-part prime-time miniseries called The Promise. It presents itself as an historical drama about Israel and the Palestinians, but its relationship with actual history begins and ends with the wardrobes. In what has become the meme of all European and international left-liberal salons, the only good Jews in the mini-series are the ones who died in the Holocaust. From the show’s perspective, every Jew who took up arms to liberate Israel from the British and defend it from the Arabs is a Nazi.

WHAT ALL this shows is that Netanyahu was wasting his time calling on world leaders to condemn the murder of the Fogel family. What does a condemnation mean? France and Britain condemned the massacre, along with the US. Does that exculpate the French and British for their embrace of anti-Semitism? Does it make them friends of the Jewish state? And say a British playwright sees the YouTubecensored photographs. No self-respecting British playwright will write a play called Three Jewish Children telling the story of how Palestinian parents do in fact teach their children to become mass murderers of Jews. And if a playwright were to write such a play, The Royal Court Theater wouldn’t produce it. The Guardian wouldn’t post it on its website. Liberal Jewish community centers in America wouldn’t show it, nor would university student organizations in Europe or America.

No, if someone wanted to use the photographs of Yoav’s and Elad’s mangled corpses and clenched fists as inspiration to write a play or feature film about the fact that the Palestinians have no national identity outside their quest to annihilate the Jewish state, he would find no mass market.

The headlines describing the attack make all this clear.

From the BBC to CNN the Fogels were not described as Israelis. They were a “settler family.” Their murderers were “alleged terrorists.”

As far as the opinion makers of Europe and much of America are concerned, the Yoavs and Hadases and Elads of Israel have no right to live if they live in “a settlement.”

So too, they believe that Palestinians have a right to murder Israelis who serve in the IDF and who believe that Jews should be able to live freely wherever we want because this land belongs to us.

Until these genteel Jew haters learn to think otherwise, Israel should neither seek nor care if they condemn this or any other act of Palestinian genocide. We shouldn’t care about them at all.