J street in its own words 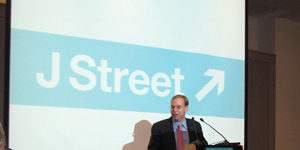 J Street’s annual conference this month unmasked its “pro-peace, pro-Israel” creed even in the eyes of liberals, and participants said on video that Hamas is no more a terrorist organization than the IDF” and that J Street should adopt the language of the “radical left.”

Its opening night ceremonies honored three people – columnist Peter Beinart, who has questioned the American Jewish community’s liberal values in relation to Israel; an Israeli activist from the solidarity movement in Sheikh Jarrah, where Arabs have stoned and fought with Jews trying to live in homes they bought legally in the Jerusalem neighborhood; and a Gaza doctor who lost three children in the Operation Cast Lead counterterrorist campaign against Hamas terrorists.

An article in Commentary noted that “J Street’s lobbying days may soon be over” because the lobby “has become something of an institution on the Jewish anti-Israel left.”

The Israeli embassy did not send any representatives to the conference. Kadima and leftist party MK’s did attend.

One American website noted that no kosher sandwiches were available at the conference.