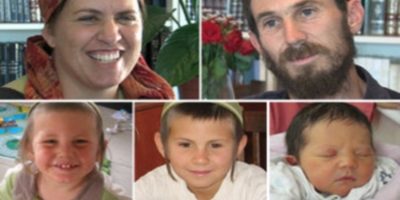 A Palestinian terrorist on Friday night quietly slipped into a home in the Samarian Jewish community of Itamar and butchered five members of the family living there as they slept.

The terrorist broke in through a living room window. He missed eight-year-old Roi Fogel, who was sleeping on the couch, and proceeded to a nearby bedroom where he slashed the throats of the father, Uri Fogel, and his 3-month-old baby, Hadas, who was sleeping with him.

At that moment, the mother, Ruth, came out of the bathroom and was quickly murdered as she looked with horror on the bodies of her dead loved ones.

The killer moved on to the children’s bedrooms, where he executed 11-year-old Yoav, who was reading in bed at the time, and stabbed three-year-old Elad twice in the heart as he slept. The terrorist missed two-year-old Shai Fogel, who was sleeping in another room.

Also surviving the attack was 12-year-old Tamar Fogel, who only returned home from a friend’s house after the attack was over. With the help of a neighbor, Tamar woke her sleeping brother who then unlocked the front door that the terrorist had locked to cover his escape.

It was then that Tamar and Roi Fogel discovered the nightmare that had visited their happy home.

The Israeli army immediately launched a manhunt for the perpetrator and any possible accomplices, and announced that due to the extreme severity of the attack, the operation will be “blue-and-white” only – meaning Israel will be hunting the killers alone, and not working together with Palestinian security forces.

Palestinian terrorists who in the past were caught first by Palestinian Authority police were able to spend a short time in jail before being prematurely released to resume their attacks on Israelis. The IDF is determined that the butcher of the Fogel family will not be given that luxury.

Young Jewish residents of Samaria reacted to the attack by setting up roadblocks and hurling stones at passing Palestinian cars and houses in nearby Palestinian villages. Meanwhile, the government responded by approving the construction of hundreds of new housing units in a number of Jewish settlements.

Palestinian leader Mahmoud Abbas and Prime Minister Salam Fayyad issued vague condemnations of the attack, reiterating that they are against all violence that targets civilians, but clearly trying to draw a parallel between the massacre of the Fogel family and Israeli anti-terror military operations.

Abbas “stressed his rejection and condemnation of all violence directed against civilians, regardless of who was behind it or the reason for it,” according to a statement released by his office.

Israeli Prime Minister Benjamin Netanyahu noted that while Abbas and Fayyad say what they must for international consumption, it is the anti-Jewish incitement they permit and even facilitate in Palestinian society that leads to such atrocities.

“A society that allows wild incitement like this, leads to the murder of children,” Netanyahu said. Palestinian television, schoolbooks and performances regularly demonize the Jews, while summer camps and public squares are named after the most successful of Palestinian terrorists.

A group affiliated with Abbas’ own Fatah faction later came forward and claimed responsibility for the attack. The group, known as the Al Aqsa Brigades, released a statement calling the brutal slaughter of the Fogel family a “natural response” to “Israeli crimes.”

In cold, unsympathetic tones the statement referred to the killer as a “combatant” who “killed all five Zionists who were in the house” and then “returned home safely after conducting his mission successfully.”

The Fogel family has given permission for photographs of the scene to be posted and redistributed online to show people around the world the cruelty with which Jews are targeted in their own homeland. The pictures can be viewed at the following link, but be warned – they are brutal and graphic: