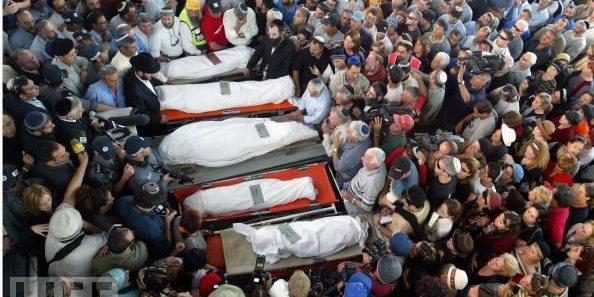 AFP — Israel said Sunday it has okayed hundreds of new settler homes after a gruesome weekend attack in which five Israelis, three of them children, were murdered in their beds in the West Bank.
The ministerial committee for settlements, which met late on Saturday, approved construction of several hundred units across in Gush Etzion, Maale Adumim, Ariel and Kiryat Sefer, a statement from the bureau of Prime Minister Benjamin Netanyahu said.
All four are among the biggest settlement blocs in the West Bank.
The decision was taken just 24 hours after five members of the Fogel family, living in Itamar settlement near the northern city of Nablus, were stabbed to death in their beds in a frenzied attack late on Friday.
The victims included a three-month-old Hadas, Elad, 4, Yoav, 11 and their parents Udi and Ruthie who were both in their 30s.
Two of the couple’s three other young children were not harmed in the attack which was discovered late on Friday by their 12-year-old daughter Tamar after she returned from a youth activity, settler sources said.
The bloodshed sparked an angry response from the Israeli leadership, and a wave of international condemnation, including from Palestinian president Mahmud Abbas and prime minister Salam Fayyad.
It was not immediately clear how many people were involved in the attack, with Israeli officials saying they believe a number of Palestinians were behind it.