The inmates are running the asylum 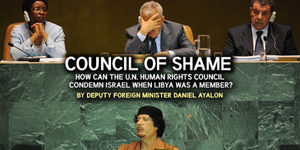 The recent unrest in parts of the Arab world has not only exposed the appalling lack of development in these countries, but also a number of fundamental deficiencies in the international system. The United Nations, which began its life with a plurality of democratic nations, now allows for an automatic majority of nondemocratic nations. The international system dictates that Arab and Islamic nations, and their knee-jerk defenders, have a majority in almost all of its bodies. This is amply demonstrated by the disproportionate amount of time spent condemning Israel.

If there were ever an example of the inmates running the asylum, it is the U.N. Human Rights Council. This body has whitewashed the human rights record of some of the world’s most repressive regimes, while also providing them with a forum to ruminate on and condemn the actions of a free and open nation, Israel.

The Libyan regime, which is currently massacring its citizens in a desperate bid to remain in power, successfully sought a place on the Human Rights Council only last year. U.N. General Assembly Resolution 60/251, which created the council, stated that when electing members of the council, U.N. member states “shall take into account the contribution of candidates to the promotion and protection of human rights.” Only through an Orwellian flight of fancy could Libya’s contribution to the promotion and protection of human rights ever have been considered positive. Recent events have made it more akin to a sick joke.

Nevertheless, in a secret ballot, 155 states voted in favor of granting Libya a coveted place on the council. These votes were given to a country that was known to be involved in extrajudicial and summary executions, brutal torture, and aiding and abetting international terrorism.

Even now, the United Nations has dithered on its responsibility to the Libyan people. It only recently decided to suspend the Libyan delegation from the council, after many days and hundreds of Libyans murdered. Even the Arab League moved quicker than the United Nations to suspend Libya in light of the violence meted out by Muammar al-Qaddafi and his regime.

Until recent events shook the Qaddafi regime’s grip on power, the Human Rights Council had proved more than willing to overlook its egregious human rights abuses. The council recently released a lengthy report partly praising Libya’s human rights record, with many on the council commending the Libyan regime for such things as its “democracy” and “the importance that the country attached to human rights.” What a joke.

The recent human rights outrages in Libya are only the latest example of how repressive dictatorships have perverted the mission of this ostensibly august body. The international human rights organization Freedom House’s September 2010 “report card” on the council found that its “membership has become increasingly populated by authoritarian countries” — including Saudi Arabia and Cuba — and “continues to earn failing grades on its ability to respond to the world’s most pressing human rights issues.”

The report further lambasted the council for its “disproportionate focus on Israel” and for becoming “appallingly politicized and dominated by some of the world’s most aggressive opponents of universal standards on human rights.”

Indeed, Qaddafi’s regime is far from the first repressive autocracy to serve on the Human Rights Council. In fact, the majority of nations currently sitting on the council are not even considered “free” by Freedom House’s extensive and detailed ranking system. Israel, on the other hand, is consistently rated as “free.”

Many government officials and commentators have questioned Israel’s noncompliance with the Human Rights Council, particularly in its inquiries into our defensive operations. These have included the infamous Goldstone Commission and the so-called “independent international fact-finding mission on the incident of the humanitarian flotilla,” which examined Israel’s attempt to prevent a breaking of its legal sea blockade by hostile and violent activists.

In light of recent events and the wretched human rights record of many of the council’s members, it should be considered a badge of honor to be condemned by such a body. If Qaddafi is the judge of what constitutes respect for human rights, then consider us — and all democracies — guilty.

The people of our region are speaking in great numbers about the need for freedom, transparency, and accountability. Too many countries in the world have allowed political or financial expediency to color their judgment on international cooperation. It is time that all decent nations advance policies to coincide with a just human rights agenda, rather than being caught in embarrassing collusion with murderous dictators.

The U.N. Human Rights Council has once again proved itself outside the evolution and progress of history. The people of our region deserve better — and are hopefully slowly moving the Middle East to a better place. Let’s hope the council does not continue to serve as a barrier to their hopes and expectations.