Why Israel worries about Jordan 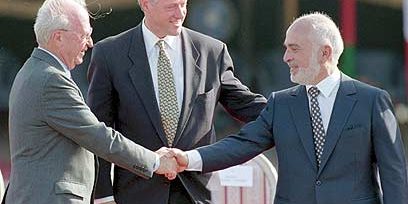 Along with much of the rest of the Middle East, Amman is facing a rising tide of anti-government fervor. The Jordanian monarchy is under increasing pressure. After the fall of the Mubarak regime, the Israelis are worried that yet another peace partner could collapse.

In Amman, leaders of the Jordanian Muslim Brotherhood, known as the Islamic Action Front, promise to continue demonstrations until their demands are met. Among other things, they are calling for constitutional changes that include making the prime minister the parliamentary majority leader, rather than a royal appointee.

The IAF, cut from the same radical ideological cloth of the global Muslim Brotherhood, commands between 20 and 30 percent support in Jordan. The group has used the country’s high unemployment and economic malaise—currently Jordan has a record deficit of $2 billion and unemployment of over 12 percent—to galvanize the public.

The monarchy has traditionally had a cultural and political commitment to maintaining the Palestinians’ sense of victimhood and dependence, to direct their ire at Israel rather than at the King. Many of the 1.9 million Palestinians in Jordan still live in refugee camps—in a nation where they are supposedly full citizens. In May 2010 they participated in a demonstration commemorating the Nakba —the “disaster” of Israel’s creation—expressing their hatred of Israel, but also, by implication, the undemocratic government under which they live.

The Brotherhood in Jordan, much like the other regional branches, regards the Palestinian problem as an Islamic problem. As such, they have concentrated many of their resources on “liberating Palestine from the global Jewish community and international Crusaders.”

One feared scenario for Israel, and a clear indicator that the monarchy would be losing its grip, is one in which King Abdullah allows the Brotherhood, together with its Palestinian supporters, to have a controlling stake in Jordan’s governance. This would create a joint Palestinian-Brotherhood stronghold in Jordan.

The Brotherhood could also simply link their struggle with the King to the Palestinian cause, and bring tens of thousands of protestors into the streets.

In the interest of preserving his own power, King Abduallah will not let that happen. The worry, of course, is that he won’t have the final say. Hosni Mubarak certainly didn’t.

Under pressure,King Abdullah II has complied with one of the opposition’s demands by firing prime minister Samir Rifai. In his place, Abdullah appointed Marouf Bakhit, a palace loyalist who played a role in the 1994 Israeli-Jordanian peace deal, and even served as Jordan’s ambassador to Turkey. The move may mollify Israel, and will certainly shore up support among the traditional Bedouin and Hashemite tribes, but certainly it has not placated the IAF, the Palestinians, or others within Jordan’s opposition.

As protests continue, the military, which remains loyal to the King, will be key to ensuring the survival of the monarchy. Jordan’s military leaders remember well what happened in 1970, when the Palestinian Liberation Organization tried to seize control of Jordan — and they do not wish to see a repeat performance. This why Abdullah is bolstering the army in its ability to maintain law and order in the country, and to crack down on any radical uprising.

The Israelis are watching worriedly. If the Hashemite regime cannot survive, the Israeli-Jordanian border could descend into anarchy, and regional stability could take a dramatic turn for the worse.