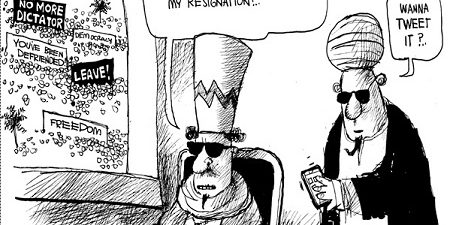 The world has marveled at how Tunisia’s Jasmine Revolution caused a domino effect bringing down Egyptian President Mubarak and sparking uprisings throughout the region and beyond, as far away as Venezuela, Albania and Belarus. Now, the unrest has spread to China and almost every single country in the Middle East and it shows no sign of stopping any time soon.

The Chinese authorities reacted quickly on Sunday after word got out about planned protests in Beijing, Shanghai and 11 other cities. Over 100 activists were arrested nationwide or put under house arrest and large amounts of security personnel were deployed to the meeting places. Internet sites were censored and the word “jasmine” was blocked from being searched on Twitter and other social networking sites. Hundreds were still able to assemble in Beijing and Shanghai and now the Communist Party is discussing more ways to censor the Internet and control the flow of information.

The Jasmine Revolution has also come to Venezuela. Less than 10 activists began a hunger strike on January 31 to demand that the Organization of American States investigate human rights abuses by Chavez. Now up to 65 people are participating and Chavez has been force to acknowledge them, accusing them of being stooges of the United States. The Justice and Interior Minister met with them and says the government will consider their demands.

The largest uprisings in the Middle East and North Africa over the past week were in Bahrain and in Libya, where the regime appears to be on its last legs as tribes have joined the uprising, an army unit defected to help the opposition captured Benghazi, and clashes have spread into Tripoli. In Bahrain, a sea of protesters were able to take over Pearl Square in Manama, where they chanted that they were not marching as Shiites or Sunnis, but as people demanding rights. One opposition leader flatly stated, “We want genuine democracy, not clerical.”

The Royal Family of Bahrain ordered the army to forcibly disperse the protesters and overrun their camp. At least four were killed and the government increased Internet censorship. The military announced a ban on all gatherings, but the protesters re-assembled any way and began burning pictures of King al-Khalifa and demanding the resignation of the entire government. The blowback from the casualties was severe enough that the government withdrew the military to permit the protesters to peacefully demonstrate in Pearl Square and discussions are now underway with seven opposition groups. The government’s opponents are keeping the pressure on and a worker’s strike is being discussed.

Massive protests happened in Iran on Sunday as well with tens of thousands turning out to challenge the regime throughout the country. These demonstrations were larger than those seen on February 14, which were the biggest since 2009. Opposition leaders Mehdi Karroubi and Mir-Hossein Mousavi are upping the rhetoric, calling the regime a “religious dictatorship” and Karroubi challenged the regime to give him a public trial. The biggest story, though, was missed by most outlets. Reporter Con Coughlin has published a letter authenticated by Western diplomats that was allegedly written earlier this month by senior Revolutionary Guards officers in Tehran, Tabriz, Isfahan and Qom to their chief. They said the use of force against the protesters is a violation of Islam and “We promise our people that we will not shoot nor beat our brothers who are seeking to express legitimate protest against the policies and conduct of their leader.”

Yemen continues to be rocked by unrest. Tens of thousands turned out in Taiz and clashed with security forces trying to disperse them. One civilian was killed by a grenade. Up to eight people were killed in clashes in Aden and government buildings were set ablaze. Armed supporters of President Saleh attacked protesters in Sanaa, but hundreds continue to protest at a university there. Saleh has accused the protesters of being manipulated by “foreign agendas,” a comment that has done nothing to dissuade the protesters. The opposition is planning to hold protests in every major city on Thursday, February 24 in a push to oust Saleh.

Nationwide protests are planned in Iraq for Friday, February 25. Protests have been held in Baghdad, Kirkuk, Basra and Sulaimaniya where one was killed and Fallujah, where 1,000 protested and an attempted self-immolation was prevented by the other demonstrators. In the south, protesters attacked government offices and forced a governor to flee. Prime Minister al-Maliki has been shaken, and has canceled the purchase of American F-16s and will use the funds to pay for food subsidies and is meeting with tribal chiefs to discuss why government services are not adequate. He has also cut electricity taxes and is offering 1,000 kilowatts for free. The Iraqi protests are different than the rest, in that they are demanding improvements in the government, not its downfall.

The Palestinian territories have become the scene of visible discontent now. President Abbas announced that parliamentary and presidential elections would take place this year, but only if Hamas also participates in the Gaza Strip. About 1,000 Palestinians protested in the West Bank to demand that Fatah and Hamas reconcile their differences and on Sunday, February 27, a human chain around Abbas’ headquarters to the parliament building will be formed. Protest organizers say that they are in contact with supporters in the Gaza Strip to assemble demonstrations in both Palestinian territories on Saturday, March 5.

On Thursday, February 17, the largest protest in Syria this year formed. About 1,500 protested in a Damascus neighborhood after a man was beaten by security personnel. The Interior Ministry has promised to investigate the incident and officials were concerned enough to come to the site of the gathering. The size of the crowd is small when compared to the other protests in the region, but it is a significant breakthrough after the “Day of Rage” failed on February 5. An imprisoned Kurdish blogger has started a hunger strike to try to force his release and that should place more pressure on the Assad regime. The Lebanese opposition led by Saad Hariri is planning a protest against Hezbollah on March 14, which could also encourage the Syrian opposition.

The Saudi government has arrested the founders of a new political party that was formed to demand reform. The detainees are being required to take back their calls for sweeping reform in order to be released and they are refusing to comply. A small protest has happened in the Shiite-majority Eastern Province. A senior member of the Royal Family is urging the government to implement liberal reforms, warning that the uprising could spread to Saudi Arabia if it does not.

Clashes continue in Jordan where 2,000 marched and protests have now come to Kuwait and Oman. Over 1,000 non-citizens in Kuwait demanded equal treatment and 50 were arrested. The Interior Minister resigned shortly before a protest against him was planned and the government is trying to shore up the support of the military, offering pardons for those that have gone AWOL for up to 180 days, an increase in the age limit for military eligibility and a pay raise for military personnel. It also released a critic that was held for two months and dropped charges against three others. In Oman, the government increased the minimum salary and 300 protested in the capital against corruption and are asking for term limits for ministers, democracy and a decrease in the prices of goods.

The governments of North Africa continue to be challenged. On Saturday, a planned protest by human rights activists fell flat in Algeria as the opposition political parties did not mobilize for the event. Up to 1,000 still demonstrated in Algiers in defiance of the government’s ban. The activists say that another rally is planned for Saturday, February 26, but there has been no definitive statement by the opposition parties as to whether they will participate. The government is deploying a huge security presence to prevent rallies and the Prime Minister is promising to end the state of emergency by the end of the month.

The unrest in North Africa has spread to Morocco. A viral video campaign built support for protests on Sunday, when 2,000 demanded a crackdown on corruption, constitutional changes to limit the power of King Mohammed VI and in some cases, a complete change in government. The government was worried enough to begin new subsidies to reduce the prices of essential goods shortly before the event. Should Qaddafi fall, it is very likely that the instability in Algeria and Morocco will reach new heights.

The removal of Egyptian President Mubarak has influenced events in Djibouti as well, as thousands protested last week. The government used force to disperse them, killing two. At least 20 activists have been sent to prison but three opposition leaders were released on Sunday. The opponents of the government are now discussing what day to choose for a rally.

The Middle East immediately changed after the Jasmine Revolution and continues to change. The instability of these tyrannical regimes and the cries for freedom are inspiring to the West and while secular democracies are always preferable, it is not certain that this is what will emerge. A high-stakes struggle between oppressive governments, secular democrats and Islamists is underway and the outcome will decide the creation of a new Middle East and North Africa with worldwide effects.