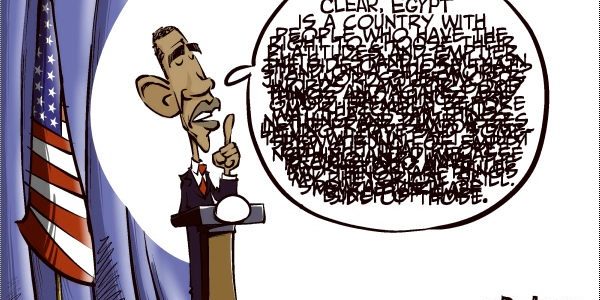 For better or worse, each passing day the Middle East is becoming more unstable. Regimes that have clung to power for decades are now being overthrown and threatened. Others are preemptively cracking down on their opponents or seeking to appease them.

While no one can say with certainty what the future will bring to the radically altered Middle Eastern landscape, it is becoming increasingly apparent that US influence over events here will be dramatically diminished.

This assessment is based on the widespread view that the Obama administration has failed to articulate a coherent policy for contending with the rising populist tides.

Last Friday’s UN Security Council vote was a case in point. On the one hand, the US vetoed a Lebanese-sponsored resolution that criminalized Israel’s policy of permitting Jews to exercise their property rights in Jerusalem, Judea and Samaria. On the other, after vetoing the resolution, US Ambassador to the UN Susan Rice and Secretary of State Hillary Clinton condemned their own actions and explained why what they did was wrong.

“While we agree with our fellow Council members — and indeed, with the wider world — about the folly and illegitimacy of continued Israeli settlement activity, we think it unwise for this Council to attempt to resolve the core issues that divide Israelis and Palestinians. We therefore regrettably have opposed this draft resolution.”

It is important at the outset to point out that Rice’s claims are either wrong or debatable. Israel has not committed itself to barring Jews from exercising property rights in Jerusalem, Judea and Samaria. Permitting Jewish construction in these areas does not violate Israel’s international commitments.

Moreover, there is no firm international legal basis for declaring Jewish neighborhoods and villages in these areas illegal.

It is far from clear that Jewish neighborhoods, cities and villages in these areas harm prospects for peace or undermine trust between Israelis and Arabs. Jews built far more homes back when Israel was signing agreements with the Palestinians.

Finally, it is far easier to form a coherent argument explaining how these communities strengthen Israel’s security than an argument that they endanger it.

BUT BEYOND the basic falseness of Rice’s statement, her condemnation of her own vote to veto the resolution, and Clinton’s similar statements, serve to send a series of messages to the states in the region that are devastating to US regional posture.

Friday’s Security Council vote marked a new peak in the Fatah-controlled, US-sponsored Palestinian Authority’s political war against Israel. The war’s aim is to delegitimize the Jewish state in order to foment its collapse on the model of apartheid South Africa.

Since the Palestinians first began using the UN to criminalize Israel in the 1970s, it has been the consistent policy of all US administrations to use the Security Council veto to either vote down anti-Israel initiatives or remove them from the agenda by threatening to veto them.

But then came US President Barack Obama with his expressed interest in reconciling the US with the anti- American and anti-Israel majorities in all UN bodies. To this end, Obama has refused to commit himself to using the veto to prevent the criminalization of Israel.

Capitalizing on Obama’s position, the Palestinians tried to make it as hard and politically costly as possible for Obama to support Israel.

Friday’s vote was months in the making and it was clearly inspired by the Obama administration’s own policies.

Since entering office, the president has been outspoken in his view that Jews must be denied their property rights in Jerusalem neighborhoods outside the 1949 armistice lines, and in Judea and Samaria. Obama has repeatedly plunged US-Israel relations into crisis with his unprecedented demand that the Netanyahu government adopt his discriminatory policies and deny Jews the right to their property in these areas.

IN THE weeks leading up to Friday’s vote, both houses of the US Congress made it absolutely clear to Obama that abandoning Israel would be unacceptable. Obama and Clinton received letter after letter signed by hundreds of congressmen and scores of senators demanding that he stand with Israel. Recognizing the legislators were simply reflecting the overwhelming support Israel enjoys from the American public, Obama was forced to veto the resolution.

Had he been interested in preventing Friday’s vote, he certainly had ample means to do so. He could have told Palestinian Authority President Mahmoud Abbas months ago that the administration would veto any anti-Israel resolution brought before the Security Council. Even if Abbas had insisted on pushing forward with the resolution, a strong, consistent message from the administration would have minimized the significance of the event.

Obama could also have used the Security Council’s deliberations on the resolution as a means of advancing US regional influence. The resolution was sponsored by Lebanon, today controlled by Hezbollah — an illegal terrorist organization.

Obama could have capitalized on this fact not only to justify his veto, but to force the subject of Hezbollah control over Lebanon onto the UN agenda. Such a move would have advanced US interests twice. It would have insulated Obama from Palestinian rebuke and it would have demonstrated that the US has not accepted Iranian colonization of Lebanon through its Hezbollah proxy.

BUT INSTEAD, the administration adopted a policy it openly hated and then condemned its own behavior. In so doing, it sent four deeply problematic messages to the region.

First, it signaled that it is deeply unserious.

Third, the administration told Israel — and all its other allies — that in the era of Obama, the US is not a credible ally. Not only does this message weaken America’s allies, it emboldens the likes of Iran and Syria and the Muslim Brotherhood who are increasingly convinced that the US will not stand by its allies in a pinch.

Finally, by standing by as Abbas pushed forward with the resolution despite Obama’s repeatedly stated opposition, the president showed all actors in the region that there is no price to be paid for defying the US. Obama did not announce that he is ending US financial support for Fatah. He did not state that the US is ending its training of the Fatah forces. Instead, he sent Rice before the cameras to tell the world that he agrees with the Palestinians, who just slapped him in the face.

The question is why is the administration behaving this way? The obvious answer is that it really does side with the Arabs against Israel. Pushing this view is the fact that since taking office, Obama has been consistently hostile to Israel and its strategic interests.

There is another possible explanation, however: That the administration is simply too incompetent to understand the significance of its actions. This explanation appears increasingly credible in light of the US’s ham-fisted handling of the revolutions raging throughout the Arab world.

In Egypt, the administration did not simply show America’s closest ally in the Arab world the door. By legitimizing the Muslim Brotherhood, Obama has paved the way for the next Egyptian crisis.

At the latest, this crisis will occur in September with the scheduled elections. At that point, three scenarios will arise.

1. The ruling military junta may cancel the elections and foment another rebellion.

2. If the military permits free and fair elections, the Muslim Brotherhood will become the most potent force in Egypt due to its unmatched organizational capacity.

After the elections the Muslim Brotherhood may adopt the model of Turkey’s Islamist AKP party and move Egypt into the Iranian camp while pretending it is still a US ally.

3. After the elections, the Muslim Brotherhood may adopt the Khomeinist model and foment an Islamic revolution in Egypt.

IN ALL these scenarios, America’s strategic interests will be placed in jeopardy. But presently, it is far from clear that the Obama administration recognizes that these are the consequences of the policies it adopted.

Then there is Saudi Arabia. By supporting the anti- Mubarak forces in Egypt and the Iranian-backed demonstrators in Bahrain and Yemen, the administration has destroyed the US alliance with the Saudis.

This may or may not be a positive development.

Saudi Arabia has been one of the most radicalizing forces in the Middle East at the same time that it has been the steady engine behind the world’s oil economy.

From an Israeli perspective, whether motivated by an animus towards Israel or extraordinary incompetence, the Obama administration’s Middle East policies offer one message: We can only rely on ourselves and so we’d better strengthen ourselves as much as possible as quickly as possible in every possible way.