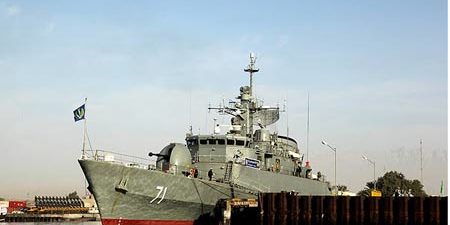 For the first time since Iran’s Islamic Revolution of 1979, two Iranian ships crossed through Egypt’s Suez Canal on Tuesday. The international shipping waterway connects the Red Sea to the Mediterranean Sea.

Iranian officials say the ships are headed to Syria and the Mediterranean for a year-long naval training mission, the BBC reported.

The ships involved are an Alvand class warship and an accompanying Kharg supply vessel.

The Alvands have been rearmed with a more capable cruise missile system, the C-802, and missile launchers. Other improvements include torpedoes and extra cannons.

North Korea has allegedly been aiding Iran to refit the ships with powerful missiles that have a range of 74 miles (120 kilometers).

Before the ships crossed the Suez, Iranian officials said there were no “military equipment, nuclear materials or chemicals on board.”

However, analysts say the ships are armed with conventional missiles.

The Kharg “has 250 crewmembers and can carry three helicopters. Alvand is armed with torpedoes and anti-ship missiles,” the Iranian Labour News Agency reported.

The move has been described as “Syrian-Iranian opportunism” by analysts in Washington, D.C., who view the passage of the ships as destabilizing during this time of flux in Egypt and the region.

Iran’s navy has made other moves meant to portray its “perseverance and firmness,” as its leaders have said, and to send messages to its neighbors.

Iran sent two warships to the Gulf of Aden, located between the southeastern coast of the Arabian Peninsula and the Horn of Africa, in May 2009 in a display of strength and to protect its oil tankers there.

Iran test fired “surface-to-surface missiles with a range of 2,000 km (1,200 miles)” in May 2009, which put Israel and American military bases within Iran’s reach, Reuters said.

Israel is closely monitoring the passage of the ships.

Iran has vowed to wipe Israel off the map, funds the terrorist organizations Hamas and Hezbollah and maintains an illicit nuclear program that may include nuclear weapons.