Who and What's behind the popular uprisings? 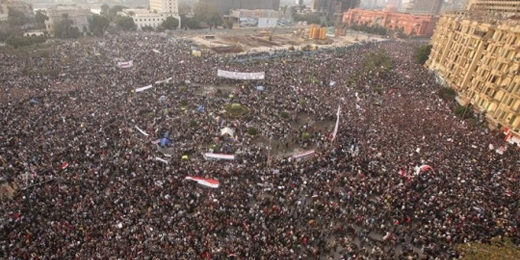 Mass social movements are normally instigated, or even directed by key players, often operating behind the scenes, but directing manifestations with very specific goals and intentions in mind. Of course the quick response from most of the media reports is, that the people of Tunis, Egypt, Yemen, Jordan and as late, also Libya and Bahrain, are just disgusted from decades of corruption and injustice by their political leaders and that it is merely a public response to years of continued misery, mismanagement and power grabbing. But digging a little deeper into the reasons surrounding these momentous events some interesting patterns are emerging.

We believe that there is a hidden hand manipulating these historic events, with a definite strategy, carefully calculated in achieving a long aspired regional plan.

There are three major reasons, which are currently motivating the masses in the Arab world:

The Internet, Facebook and Twitter have indeed been key mediums in organizing and directing the demonstrations, making these to appear as mere social movements. While the same mass media also offers wide public dissemination around the globe in real-time, it is highly hypothetic to assume, that such contagious manifestations could incite simultaneous mass demonstrations, without some guiding force behind it. Organizing large-scale public events requires preparations, which are extremely dangerous in autocratic nations, constantly monitoring such activities closely, and striking home before they emerge.

The present series of such mass demonstrations, infecting others in unprecedented succession, is a new development in the Middle East. Rather than being a mere public response to injustice and corruption, which no doubt seem genuine under the circumstances, there appears to be a very specific strategy which has not yet been fully exposed.

Western media are engulfed by a wave of enthusiastic euphoria, describing scenes of cheering popular awaking- in revival of long gone romantic memories- like the fall of Communism, or the toppling of the Berlin Wall. But unfortunately, the Clocks in the Middle East are moving quite differently. Even in such momentous past events, in which kings and brutal despots were removed, the ultimate outcome proved worse than before and the peoples’ misery and despair became aggravated by even more ruthless leaderships.

A strange phenomenon, which is missing in the present popular manifestations, is the obvious leadership directing the masses. This missing link is presenting a lucrative void to be exploited by highly organized, usually shrewdly operating elements, normally emerging from radical Islamic sources.

Someone is already lurking in the shadows, having waited patiently for the opportune moment to gain his coveted goal – Shia domination of the Sunni hegemony in the region: Ayatollah Ali Khamenei, Iran’s supreme leader has already called the popular uprisings in Egypt and Tunisia an “Islamic liberation movement”.

The Khomeini example could illustrate the dilemma confronting the Egyptian leaderless opposition. A missing dynamic leader may end up stunting their genuine revolutionary movement. But even having one has its own dangers. All too often, successful revolutionary leaders, once having tasted their power, may turn out to be even more despotic than their ousted predecessors.

Perhaps the most intriguing aspect of the ongoing Domino effect, spreading like wildfire around the entire region, is the enigma of the Muslim Brotherhood- perhaps the only organized entity, which could recruit sufficient power to benefit from the popular uprising. But so far, the Brotherhood has kept invisibly hiding carefully in the shadows. Are they waiting until chaos is reaching unacceptable proportions, and only then step in to the gather the spoils?

The answer could already be in the offing. At the zenith of the “victory Parade” last Friday, Sheikh Yusuf al-Qaradawi, the ultra-radical spiritual father figure of the Muslim Brotherhood suddenly appeared on Tahrir Square, having returned from his long exile in Qatar. Holding a fiery sermon before the packed audience, the 84 year old sheikh lauded political Islam in a future role in Egyptian politics.

One of the strangest school of thought is also emerging from Washington. Testifying recently before the U.S. House Committee on Intelligence, retired air force general James Clapper, Director of U.S. National Intelligence and the overseer of 16 various intelligence agencies, actually made an unbelievingly startling comment, describing the Muslim Brotherhood as “largely secular”, totally misplacing that this very organization became one of the founders of Osama bin Laden’s Islamic Al Qaeda, with some of its members being active leaders in this global terrorist group! How the top US intelligence director could misguide on such an important issue, which his very own organization is fighting for decades, is past comprehension! No wonder then, that his boss, President Barak H. Obama is ignoring, or even misunderstanding most of the burning issues, which are already inflaming one of the most explosive regions on earth.

Moreover, a recent translation of a book written by the movement’s fifth official leader should shed light on just how Egypt’s Brotherhood views itself and its mission. Titled ‘The Laws of Da’wa’ by Mustafa Mashhur, details the Brotherhood’s objectives of advancing the global conquest of Islam and reestablishing the Islamic Caliphate. Reading Mashhur’s and other such writings, which are in abundance, one must come to an uncontested conclusion, that any White House rambling over the Muslim Brotherhood being moderates is absolute nonsense. In fact, The Muslim Brotherhood in Egypt is as radical as Hamas and Hezbollah. But meanwhile the Brotherhood is using a cunning guise to shield its real intentions. Leaving the “dirty” work to its affiliated terrorist group Al-Gama’a a Islamiyya, actually its military wing, the Brotherhood can hide behind a curtain of moderation.

But Al Gama, under the leadership of the notorious Sheikh Omar Abdel Rahman, imprisoned in the US following the 1973 World Trade Center bombing, engaged in a ruthless terrorist campaign during the nineties. During the present manifestations, the group’s new spiritual leader, Muhammad Badi, has publicly called for violent jihad, including against the U.S.

But matters are getting even more precarious, as Wikileaks tell us: Even as people in Washington were officially supporting their staunch ally, Egyptian President Hosni Mubarak, American officials were secretly helping Egyptian dissidents interested in using social media to overthrow his regime. This astonishing news was revealed in a secret cable from Cairo Embassy, to the State Department dated December 30, 2008 noting: ” A leader of the April 6 Youth Movement (a Facebook-driven group that has played a major role in Egypt’s current upheaval) l told U.S. officials that opposition groups had agreed on a plan to replace the autocrat with a parliamentary democracy”. Virtually undermining their ally, U.S. officials helped this man to attend the “Alliance of Youth Movements Summit,” which took place that same month at Columbia University in New York, in which speeches were held among others by a senior undersecretary in the U.S. State Department.

If this is not sufficient evidence of American ignorance, if not monumental stupidity, the result from this caper was that the same “April 6″ Movement leaders, now affiliated to the anti-American Muslim Brotherhood have expressed similar radicalism against the United States and the Egypt-Israel peace accord, which they defy and abolish.

The way in which the Obama Administration is handling the ongoing crisis in the Middle East leaves much to be desired, an understatement, if any. It could, if not curbed in time, with an energetic change of strategy, bring to total disaster and inevitably to Shia hegemony of the entire Sunni region.