The Koolaid of Interfaith Dialogue and the Clergy that Drinks It 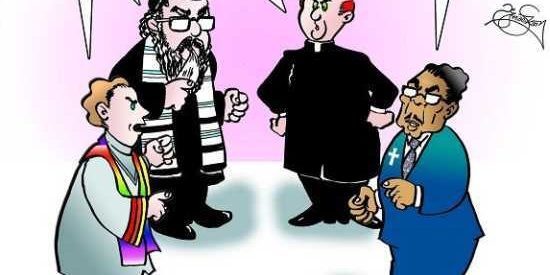 By RACHEL  LIPSKY, Pajamasmedia — We’re Losing the Battle Against Islamism. Where is the principled leadership among Jewish and Christian clergy?

One positive outcome to draw from Egypt’s crisis is the public’s elevated awareness about the Muslim Brotherhood. It is now clearer to many that the Brotherhood’s members are exploiting our open societies and political system right here in our own communities.

The media’s role in deflating the Brotherhood’s dangerous agenda is profound. But other segments of our society are equally guilty. And so, to learn how steadily and consistently the West is losing to a totalitarian political doctrine, read this account. On the surface it may seem an insignificant episode, but assuming it is the model for interfaith or “twinning” devotees, it should be illuminating.

On Dec 4th I attended an interfaith event about which I wrote an article on Pajamas Media, “Where Islamism starts, Interfaith Dialogue Stops.”

At the event, I wanted to share a quote from a document stating the mission of the Muslim Brotherhood in the U.S: “a kind of grand Jihad in eliminating and destroying the Western civilization from within […].”

To my dismay, as I was about to read the quote, the host, Rev. Yorty, wouldn’t allow me to do so, stating that he did not want to discuss politics. However, he and his cosponsor guest, Reform Rabbi Harry Rosenfeld, allowed other participants to defame Israel with impunity. For them, criticizing Israel did not seem to fall under the rubric of “discussing politics.”

I left the room, not imagining that within weeks I would face these individuals with such low moral standing yet again.

But on January 29th, two Muslim Brotherhood affiliate organizations — the Muslim Public Affairs Council (MPAC) and the Muslim Students Association (MSA) — invited and sponsored Imam Rauf as a keynote speaker at the University of Buffalo. And who do you think participated in the interfaith panel session along with Imam Rauf? You guessed correctly. The same Presbyterian Pastor Thomas Yorty and his cosponsor Rabbi Harry Rosenfeld, who joined Imam Rauf to discuss “how Americans of all faiths can work together for lasting peace.” They both spoke favorably of Imam Rauf and supported the work of MPAC. Overall, the interfaith session was devoid of any theological substance. Instead, the same superficial clichés often repeated during these events were offered yet again with petty statements like “We need to improve our knowledge of other people’s religions.” Of course, during the first event I tried to “improve our knowledge” of the political tenet of Islam, but to no avail. They sabotaged critical thinking and rejected any dissent from their rigid narrow-minded creed.

In the Q&A last session with Imam Rauf, a question was asked about persecution of Christians in the Middle East. Pastor Yorty responded: “Christian persecution is not a topic I know much about.” If the pastor knows nothing about his fellow Christians (hundreds of thousands of murdered Christians in the past three decades), how can he be trusted on interfaith dialogue between Muslims and Christians?

The rabbi’s response to the same question was that Christian persecution in the Middle East is NOT religiously oriented; rather, it’s all political. For example, he stated that Christians who left Beit Lechem did it because of “political fear.” Unfortunately, this stunning response was not followed with any evidence.

Next, a question was asked about the rise of the new anti-Semitism. Rabbi Rosenfeld responded that “lousy economics” has been the reason for the hatred, assuring the mostly Muslim audience of some 150 individuals that anti-Semitism is currently “much less than ever before.” The rabbi also blamed the media for exaggerating anti-Semitism. Surely, the “rabbi” is unaware that his statement is strongly contradicted by the FBI, the CIA, and the U.S. State Department.

The same Rabbi Rosenfeld showed no inhibition in mocking his political opponents. He referred to those who raise the alarm on the supremacist doctrine of Islam as “wacko” and “extremists” and even asked his embracing audience: “don’t you have to laugh at some of these people?” The rabbi’s partner, Pastor Yorty, used the word “haters” to describe opponents of his views.