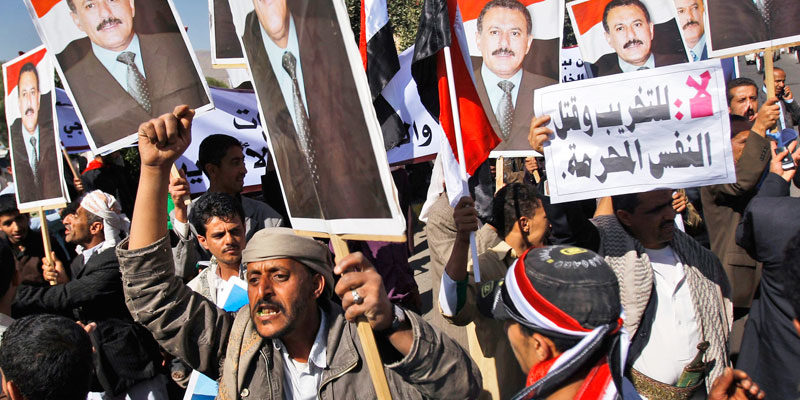 The continuing wave of unrest sweeping the Middle East led to a fifth day of protests Tuesday in Yemen and thousands of protesters swept into the main square of the capital of Bahrain, setting up tents and vowing to stay until the government agrees to major reforms.

In Iran, hard-liners in parliament demanded that opposition leaders be executed for advocating protests that attracted tens of thousands of people.

As many as a thousand anti-government protesters marched through the streets of Sana, the Yemeni capital, but it was large numbers of supporters of President Ali Abdullah Saleh who appeared to have the upper hand, gathering in a festival in downtown Tahrir Square with music and nationalist slogans.

Young men in tribal dress milled around the entrances to the square bearing sharpened sticks and bludgeons, and pictures of the president, who has ruled Yemen for more than 30 years, suddenly proliferated on cars and buildings around the capital.

Yet there were fewer clashes than before, and protesters vowed to press their street revolt until Saleh stepped down.

“Years of trying to keep the Yemeni people in ignorance and poverty have failed,” said protester Jameel Awad, a 28-year-old taxi driver. “Tunisia and Egypt have shown us that nothing is impossible. The youth see that this is their time to claim the future … and we will not let the opportunity pass.”

In Bahrain, the death of a second protester, killed when police clashed with mourners at a funeral assembly for a demonstrator shot to death Monday, prompted more than 6,000 people to march into Pearl Square in Manama, the capital. Many declared their intention to remain until the government addresses long-standing grievances over political discrimination and police repression.

Protesters have said their chief demand is the resignation of the prime minister, Khalifa bin Salman Khalifa, the king’s uncle and one of the wealthiest men in the country, who has held the post since Bahrain’s independence in 1971.

By Tuesday night, protesters were setting up tents and sleeping bags and passing out food, water and tea in an echo of the 18-day occupation of Cairo’s Tahrir Square that led to the resignation of Egyptian President Hosni Mubarak on Friday.

“All the people now are protesting inside the roundabout, and they declared that they will not move from this roundabout if they don’t get their demands,” said Mohammed Maskati, head of the Bahrain Youth Society for Human Rights. “So now, people are going to their houses to get what they need to stay, and they will sleep in the roundabout.”

King Hamad bin Isa Khalifa said in a televised speech that the deaths of the two protesters would be investigated.

“We extend our condolences to the parents of the dear sons who died yesterday and today. We pray that they are inspired by the Almighty’s patience, solace and tranquility,” the king said.

By day’s end, though some protesters appeared committed to settling into Pearl Square, others said they were uncertain of the point of the demonstration or where it was headed.

“When the protests began, there were a lot of calls for reform and human rights and equality. But after having two people killed, there were, like, conflicting demands. You see some of them calling for complete overthrow of the regime, but others saying only the people responsible should be brought forward,” said Ali Saeed, a writer who has been part of the protests.

The demonstrators have included both Sunni and Shiite Muslims, but one of their major grievances has been repression and discrimination of the country’s 70% Shiite majority by the Sunni monarchy and elite. The main Shiite Islamist opposition bloc, the Islamic National Accord Society, also known as Wefaq, announced that it was boycotting parliament in protest of the violent tactics used against peaceful protesters.

Two young men also died in Iran in demonstrations Monday, when tens of thousands of marchers demanding an end to repression and calling for free elections were set upon by citizen militias known as Basijis and police wielding tear gas and rubber bullets.

Some members of parliament called for the executions of opposition leaders Mir-Hossein Mousavi and Mehdi Karroubi.

“The chiefs of the sedition have reached the end of the road, and it is time for to do their duty and judge and punish them,” Ayatollah Ahmad Khatami said in a statement carried by the Fars news agency.

“My hope and expectation is that we’re going to continue to see the people of Iran have the courage to be able to express their yearning for greater freedoms and a more representative government, understanding that America cannot ultimately dictate what happens inside of Iran any more than it could inside of Egypt,” Obama said.

Authorities say one of the two men killed, Saane Zhaleh, a student at Tehran University, was a member of the Basiji militia and was shot by opponents of the government, a contention the opposition denies.

State television featured interviews with two of Zhaleh’s professors and his brother, who said the young man was religious, and Basiji students at the university gathered publicly and insisted that Zhaleh was one of them.

But one of Zhaleh’s professors interviewed by the Los Angeles Times, who declined to be identified for fear of reprisals, said Zhaleh had been arrested for a few days in December 2009 in the protests that followed Iran’s disputed presidential elections.

“So he was not Basiji. He was a typical student, like others,” he said.