It’s what the good people on West 40th Street like to call a “Times Classic.” On Feb. 16, 1979, the New York Times ran a lengthy op-ed by Richard Falk, a professor of international law at Princeton, under the headline “Trusting Khomeini.”

“The depiction of as fanatical, reactionary and the bearer of crude prejudices seems certainly and happily false,” wrote Mr. Falk. “What is also encouraging is that his entourage of close advisers is uniformly composed of moderate, progressive individuals.”

After carrying on in this vein for a few paragraphs, the professor concluded: “Having created a new model of popular revolution based, for the most part, on nonviolent tactics, Iran may yet provide us with a desperately needed model of humane governance for a third-world country.”

Members of the Muslim Brotherhood clutch Qurans as they’re led to court. 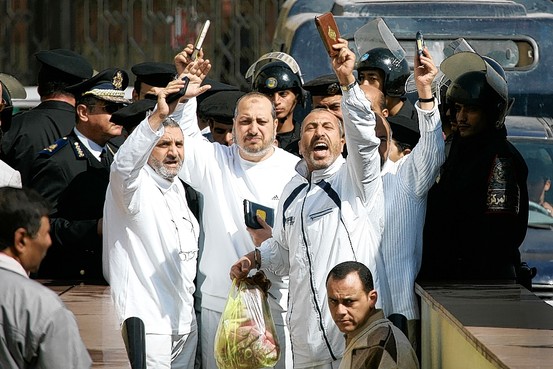 The Times is at it again. Last week, the paper published an op-ed from Essam El-Errian, a member of the Muslim Brotherhood’s Guidance Council, who offered this soothing take on his organization: “We aim to achieve reform and rights for all: not just for the Muslim Brotherhood, not just for Muslims, but for all Egyptians.” Concurring with that view, Times reporter Nicholas Kulish wrote on Feb. 4 that members of the Brotherhood “come across as civic-minded people of faith.”

It’s easy to be taken in by the Brotherhood: Eight decades as a disciplined, underground organization, outwardly involved in charitable social work, have made them experts at tailoring messages to separate audiences. The Brotherhood has also been careful to distinguish itself from the Salafist followers of Sayyid Qutb, himself a Muslim Brother who developed the concept of takfir, which allows one Muslim to denounce another Muslim as an apostate and treat him accordingly. “The thought of the Brotherhood doesn’t have the tendency to . . . take violent measures,” Muhammad Habib, the Brotherhood’s former deputy supreme guide, told me in Cairo in 2006.

But if that counts for moderation in the context of intra-Islamic politics, it hardly makes the Brotherhood moderate by Western standards. Hassan al-Banna (1906-1949), the Brotherhood’s founder, was an admirer of the fascist movements of his day, and he had similar ambitions for his own movement.

“Andalusia, Sicily, the Balkans, south Italy and the Roman sea islands were all Islamic lands that have to be restored to the homeland of Islam,” he wrote in a message dedicated to Muslim youth. “As Signor Mussolini believed that it was within his right to revive the Roman Empire . . . similarly it is our right to restore to the Islamic empire its glory.”