The Moral Clarity of Natan Sharansky 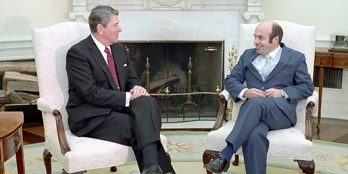 On a cold February day, twenty-five years ago, Natan Sharansky slumped like poured cement in the Russian snow declaring, “I won’t move until you give me back my Psalms book.” Given to him by his wife Avital before their thirteen years of separation, the book was his most cherished possession—the Psalms his constant words of encouragement. According to Sharansky, “I was literally scared to leave without it.” His KGB escorts stood by him dumbfounded as he went from slumping to lying in the snow. Photographers shied their cameras away. The plane idled on the runway.

When Sharansky finally boarded his flight to freedom, the Psalms book was in his hands, and “victory” was on his lips.

Over the next two and a half decades in Israel, Sharansky never broke from the same strict code of conscience and integrity that he displayed on the cold Bykovo tarmac. Even the luxuries of freedom and temptations of power have done nothing to confuse his moral compass. In a time where everyone from Seattle to Tel Aviv is frustrated with the lack of consistency and courage in politics, Sharansky stands out as a rare jewel.

For nine years, Sharansky did not see outside his Siberian labor camp. 400 of those days were in punishment cells and more than 200 days he was on hunger strikes—often protesting the confiscation of his Psalms book. Thanks to the tireless efforts of Avital, the sympathies of the American public, and the strong hand of President Ronald Reagan, Sharansky was the first political prisoner released by Mikhail Gorbachev.

When Sharansky arrived to the Tel Aviv airport, he was met by thousands of well-wishers singing “how good and pleasant it is for brothers to sit together.” Sharansky represented all things to all people: the victory of human rights, the fall of communism, the plight of Soviet Jewry, and the Zionist dream. Sharansky laments that “expectations could not have been higher for me.” Before he could get over the shock of soft mattresses and scented shampoo, he was pursued by every political party and interest group.

Sharansky managed to stay out of politics for ten years, working instead to help the immigration and absorption process of the huge wave of Russian immigrants to Israel in the early 1990s. Sharansky reached a point, however, that he felt what really needed to be done for Russian immigrants had to be fought in the political arena. When Sharansky threw his hat in the political ring an article in the Wall Street Journal read, “What happens when a man of unimpeachable integrity walks into the imperfect world of politics? We may soon have our answer in Israel.”

Sharansky admits that his experience in the Gulag actually hurt his ability to operate as a politician. “I wasn’t a good politician,” he says, “because I wasn’t comfortable in these roles.” For him, the world exists in black and white.

“Life was very simple in the prisons. You say no to the KGB and you fulfilled your moral commitments.” For this reason, Sharansky says “being a dissident in a police state is not a good school for politicians of free countries.”

In his biography which he characteristically titled, Fear No Evil, Sharansky recalls that when he was a normal Russian citizen, trying not to rock the boat, he was in reality a slave. He refers to it as living in a state of “double think.” But as soon as Sharansky connected to his Jewish roots and declared his allegiance to Jewish causes, he felt like a free man, even if he was located physically in a prison.

In the world of politics, there has been too much grey for Sharansky to ever feel comfortable, too many political calculations and compromises. In 2000, Sharansky left his ministerial post after learning that Ehud Barak was negotiating the division of Jerusalem. In an article with the New York Times Sharansky warned, “If the Jewish people are not prepared to hold their ground in the city that for 2,000 years kept the dream of Jewish sovereignty alive, I shudder to think of where we are willing to draw the line.” Sharansky later rejoined Ariel Sharon’s government but when the Gaza disengagement plans rolled forward, Sharansky resigned in protest.

Since June 2009, Sharansky has served as Chairman of the Jewish Agency; it is in this role he feels the most at ease. The Jewish Agency is in charge of immigration and absorption of Jews to Israel, and also preserving Jewish unity between Israel and the diaspora. Here, Sharansky’s idealism has found a home.

As a dissident, prisoner, politician, author, and Israeli activist, Sharansky has never acted against his conscience. At worst, Sharansky may be naively idealistic. At best he, like the Psalmist, just “speaks the truth from his heart.” Sharansky still carries his Psalms book with him today.