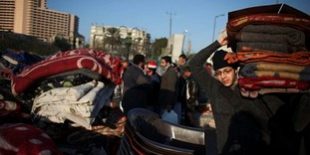 Egypt’s military rulers have promised the country will abide by its international agreements, a nod to allay concerns that Egypt’s peace deal with Israel could be threatened following the ouster of Egyptian President Hosni Mubarak.

The military has also asked the current government, appointed by Mubarak, to continue operating until a new one is formed. It also says it is committed to eventually handing over power to an elected administration.

Saturday’s military statement is its first indication of the next steps after Mubarak’s fall, but left unanswered the question of how long the current government would stay in place.

Egypt’s military relaxed a nighttime curfew Saturday and banned current and ex-government officials from traveling abroad without permission in its first moves since taking power after President Hosni Mubarak’s ouster.

Egyptians were hopeful Saturday but faced an uncertain future, with many protesters vowing to stay camped in a central Cairo square until they hear “clear assurances” that their demands for democracy will be met.

Burnt-out vehicles were being towed away and Egyptian soldiers swept the streets and cleared barricades to open at least road leading to Tahrir, or Liberation, Square after a night of jubilant celebration and nearly three weeks of protests that forced President Hosni Mubarak to surrender power to the military.

Protesters were divided. Some took down their makeshift tents and headed home. Others vowed to stay put until the military, which has pledged to shepherd reforms for greater democracy, issues a promised statement on its next steps.

Those could include the dissolving of parliament and creation of a transitional government.

“We have to see how the army will orchestrate a democratic transfer of power. We have to wait and see,” said Ali Mohammed, a sales manager camped out on the square.

Under a banner reading “the people managed to oust the regime,” two other protesters argued about whether to clear the downtown square near the famed Egyptian museum.

Shopkeeper Gomaa Abdel-Maqsoud says he’s been in Tahrir Square since the protests began on Jan. 25 and is ready to go. He says “I have never seen such happiness in peoples’ faces before; what else do I want?” he asked.

Nadal Saqr, a university professor, insisted protesters should stay until the army offers “clear assurances” that their demands for democracy are met.

Elsewhere, Egyptians in coffee houses and on the street scoured newspapers for details about the astonishing events from the day before — when hundreds of thousands marched on Mubarak’s palaces in Cairo and Alexandria and besieged state TV, leading the military to effectively carry out a coup at the please of protesters.

The 82-year-old former leader, meanwhile, remained with his family in the Red Sea resort of Sharm el-Sheikh, according to local officials, who spoke on condition of anonymity because they weren’t authorized to release the information.

Mubarak’s downfall at the hands of the biggest popular uprising in the modern history of the Arab world had stunning implications for the United States and the West, Israel, and the region, unsettling rulers across the Mideast.

President Barack Obama’s senior military adviser was heading to the Mideast Saturday to reassure two key allies — Jordan, facing its own rumblings of civil unrest, and Israel, which sees its security at stake in a wider transformation of the Arab world.

Adm. Mike Mullen, chairman of the US Joint Chiefs of Staff, was stopping first in Amman for meetings Sunday with senior Jordanian officials, including King Abdullah II. Jordan has seen five weeks of protests inspired by unrest in Tunisia and later Egypt, though the numbers of marchers has been decreasing.

He then was to Tel Aviv for meetings and ceremonies Sunday and Monday marking the retirement of his Israeli counterpart, Lt. Gen. Gabi Ashkenazi, and talks with Prime Minister Benjamin Netanyahu and President Shimon Peres. Mullen had no plans to visit Egypt on this trip.

Israel is deeply worried about the prospect that Mubarak’s ouster could lead to the emergence of a government less friendly to the Jewish state.

Any break seems unlikely in the near term. The military leadership supports the treaty. Anti-Israeli feeling is strong among Egyptians, and a more democratic government may take a tougher line toward Israel in the chronically broken-down peace process. But few call for outright abrogating a treaty that has kept peace after three wars in the past half-century.