Resentment toward US seen building in Egypt 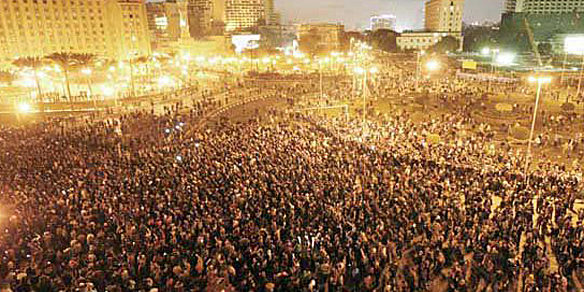 An undercurrent of anger against the United States appears to be building here because of what many see as the Obama administration’s overly cautious response to the demands of protesters for the resignation of longtime U.S. ally President Hosni Mubarak.

Anti-American sentiment in Egypt has percolated just below the surface in Egypt for years, exacerbated by the 2003 invasion of Iraq and Washington’s steadfast support for Israel.

While the current level of public antipathy remains relatively low, anti-U.S. placards have been popping up amid the anti-Mubarak posters in the streets. And some seeking an end to Mubarak’s three decades of rule are quick to cite what they see as American hypocrisy.

“They are just waiting to see which side wins and then they will claim to have backed them all along,” said Amin Iskander, an official of the El Karama party, an opposition group.

Two years ago, President Barack Obama chose this influential Arab capital as the setting for a landmark speech, reaching out to the Muslim world and calling upon Arab regimes to respect the “will of the people.” In previous years, President George W. Bush made a series of calls for increased democracy in the Middle East.

Cairo resident Said Samir, 26, was among those inspired by Obama’s words. But on Monday, Samir was questioning the president’s sincerity in a situation where the public is fed up with a man it sees as an autocratic ally of America.

“If America really cares about democracy, why aren’t they behind us?” asked Samir, who spent Sunday night in Tahrir Square with hundreds of other protesters. “The U.S. went to Iraq and Afghanistan because they said they wanted to bring democracy, but their policies are unfair. If America keeps backing this regime and not the revolution, the people in Egypt will be very angry.”

Tariq Abbas, 50, an engineer also ignoring the overnight curfew, warned that Egyptians won’t forget soon how, in his opinion, the United States has not lived up to its own rhetoric about democratic values. “America is going to pay a big price for supporting Mubarak.”

Opposition leader Mohamed ElBaradei, the former U.N. International Atomic Energy Agency chief who in recent days appears to be gaining support, has likewise warned Obama to not be the last one calling for Mubarak’s resignation.

“You are losing credibility by the day,” he told CBS News on Sunday. “On one hand, you’re talking about democracy, rule of law and human rights, and on the other hand, you’re lending still your support to a dictator that continues to oppress his people.”

After Friday’s violent clashes with police, many protesters angrily held up tear-gas canisters that had been fired at them, pointing to the “Made in the USA” labels. The devices are part of the more than $1 billion in economic and military aid that the U.S. provides for Egypt.

Scattered among the protest signs in the downtown square, some in broken English, are slogans such as, “USA don’t involve, We will get our (democracy) with our will. Play ur games with the tyrant.”

The Obama administration is well aware of the risks to the Mideast’s stability that it faces in the unfolding crisis. American diplomats say that as a result, they are struggling to strike the right balance in tone and action.

Washington is wary of simply abandoning a predictable partner like Mubarak, who has long been a key Mideast partner in fighting Islamic extremism and keeping peace with neighbor Israel. Yet to some American officials, the situation is reminiscent of Iran in 1979, when U.S. support for the hugely unpopular shah backfired, resulting in the U.S. Embassy hostage crisis and the rise of a fervently anti-American government that remains firmly in control.

“They’re just trying to be neutral to prevent things from getting out of hand,” said Azza Abdulfadl, a science professor at Benha University. “There needs to be a plan. If Mubarak just quit today, it would take us into chaos.”

Yet many think the careful modulation in statements by U.S. officials — at times having called Mubarak’s rule “stable” while also calling for an “orderly transition” — have made American policy appear “fickle and insincere,” said political analyst and journalist Hisham Kassem. “The risk is that the U.S. will lose a lot of its influence in the region.”