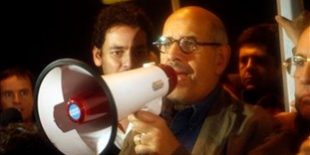 by RYAN JONES, ISRAEL TODAY — Malcolm Hoenlein accused ElBaradei of being a “stooge of Iran.”

Egypt could soon go the way of Lebanon in becoming a satellite or close ally of Iran if the current street demonstrations succeed in toppling the government of President Hosni Mubarak.

Until now, the week-long protests have lacked a clear leader, someone to take over should Mubarak fall. But Mohammed ElBaradei, former head of the International Atomic Energy Agency (IAEA), is busy setting himself up as just such a leader.

ElBaradei openly backed and took part in the demonstrations over the weekend, quickly earning him the support and admiration of most of the protestors.

ElBaradei is a clean-cut diplomat with extensive ties to the international community. But Malcom Hoenlein of the Conference of Presidents of American Jewish Organizations warned everyone not to be fooled.

In an interview with Yeshiva World News, Hoenlein accused ElBaradei of being a “stooge of Iran.” Hoenlein noted that during his years as head of the IAEA, ElBaradei worked tirelessly to oppose Western sanctions against Iran’s nuclear program. ElBaradei adopted and championed the Iranian line that its nuclear program was purely civilian in nature.

His successors later acknowledged that ElBaradei’s reports were not accurate.

The kind of leader ElBaradei would be was further revealed on Sunday when Egypt’s Muslim Brotherhood, the forerunner of the Palestinian Hamas, publicly endorsed him as the next president of Egypt.

Meanwhile, Egyptian protestors on Monday began to express great frustration over the lack of an international response to their uprising, especially from the US.

Many Egyptians noted that the Mubarak regime is deeply entrenched, and without the help of international pressure, they are unlikely to be able to dislodge it. They accused Washington of supporting a repressive dictator because doing so serves American interests in the region.